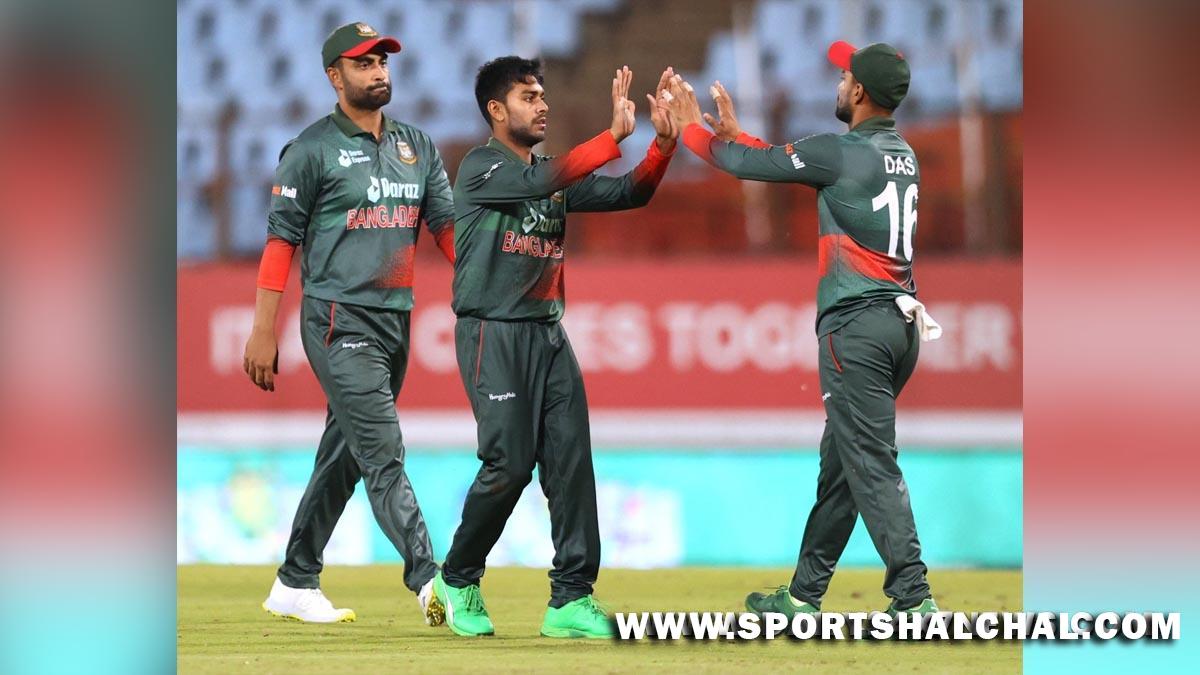 Centurion : Bangladesh’s top order fired on all cylinders as the tourists notched up a massive 314/7 and then dismissed South Africa for 276 to secure a historic away 38-run win in the first One-Day International at SuperSport Park and take a 1-0 lead in the three-match series.This was Bangladesh’s first-ever win on South African soil. The Tamim Iqbal-led side had never won an ODI in South Africa in 19 previous attempts, but produced a fine display in the first match of the tour on Friday evening to break new ground in the 50-over format.With the victory, Bangladesh further strengthened their place at the top of the ICC Men’s Cricket World Cup Super League standings, where they lead England and India in the top three.Litton Das (50), Shakib Al Hasan (77) and Yasir Ali (50) laid the foundation for the massive total, while useful contributions from Tamim Iqbal (41) and Mahmudullah (25) guided them to 314 in 50 overs.Early wickets then pegged South Africa’s chase back, with Shoriful Islam and Taskin Ahmed making early inroads. But fine half-centuries from Rassie van der Dussen (86) and David Miller (79) gave the hosts hope.

However, Mehidy Hasan Miraz rattled through the tail with a four-for, picking up the crucial wicket of Miller.There were jubilant scenes on the pitch when Mahmudullah had Keshav Maharaj trapped in-front to seal a 38-run win.After being put in to bat first, Bangladesh struggled initially. Openers Tamim Iqbal and Litton Das were cautious, scoring at a snail’s pace, their half-century stand coming only in the 16th over. While both batters hit an occasional boundary, they were kept quiet for most of the time by a disciplined South African attack.The openers broke the shackles in the 19th over when Litton smashed Maharaj for a six and two fours and were well-placed to cross the 100-run mark when Andile Phehlukwayo trapped Tamim in front of off to break the 95-run opening stand.Litton, who got to his 50 in the next over, was also undone soon after when Maharaj tricked him to shatter his stumps.Mushfiqur Rahim could not last long either and departed for a 12-ball nine. At 124/3 in the 29th over, Bangladesh needed someone to stabilise their innings and Shakib Al Hasan and Yasir Ali did the rebuilding job.After seeing off the initial overs, Shakib started accelerating. While Yasir held on at the other end, Shakib started playing his shots, bringing up his fifty with a six over long-off in the 38th over and continuing the assault.

The partnership of 115 was broken in the 42nd over with Lungi Ngidi getting Shakib LBW for 77 (64). In the next over Kagiso Rabada caught and bowled Yasir for 50 (44).And with the platform set for a solid total, cameos from Mahmudullah (25), Afif Hossain (17), and Mehidy Hasan (19 not out) powered Bangladesh to 314/7.Three wickets fell in the powerplay at the start of South Africa’s reply, as Janneman Malan and Aiden Markram fell cheaply and Kyle Verreynne was dismissed for 21. South Africa rebuilt through Temba Bavuma and Rassie van der Dussen, with the pair taking their side beyond three figures in an 85-run partnership that ended when the captain was caught behind off Shoriful.Van der Dussen looked in the mood, moving beyond his half-century and looking on for a century before Yasir Ali produced a stunning catch on the rope to send him packing for 86.The required rate was creeping up as Bangladesh’s attack kept things tight. But with David Miller still out in the middle and looking to be in explosive form South Africa still had a chance. But wickets were tumbling at the other end, with Mehidy Hasan Miraz removing Andile Phehlukwayo, Marco Jansen and Kagiso Rabada in the space of two overs with his off-spin.The 24-year-old got the scalp that Bangladesh really wanted to effectively seal the win, tossing one up to get the better of Miller, who was stumped for an excellent 57-ball 79. There were only seven deliveries remaining and 38 runs still required when Keshav Maharaj became the last wicket to fall, wrapping up a famous and deserved win for Bangladesh.The second ODI will be played in Johannesburg on Sunday, with the third and final ODI back at Centurion on March 23.
Brief scores: Bangladesh 314/7 in 50 overs (Tamim Iqbal 41, Litton Das 50, Shakib Al Hasan 77, Yasir Ali 50; Marco Jansen 2/57, Keshav Maharaj 2/56) beat South Africa 276 in 48.5 overs (Temba Bavuma 31, Rassie van der Dussen 86, David Miller 79; Shoriful Islam 2/47, Taskin Ahmed 3/36, Mehidy Hasan Miraz 4/61) by 38 runs.

‘I would like a film or web series made on my life’: Bhajji blames Dhoni, BCCI for…