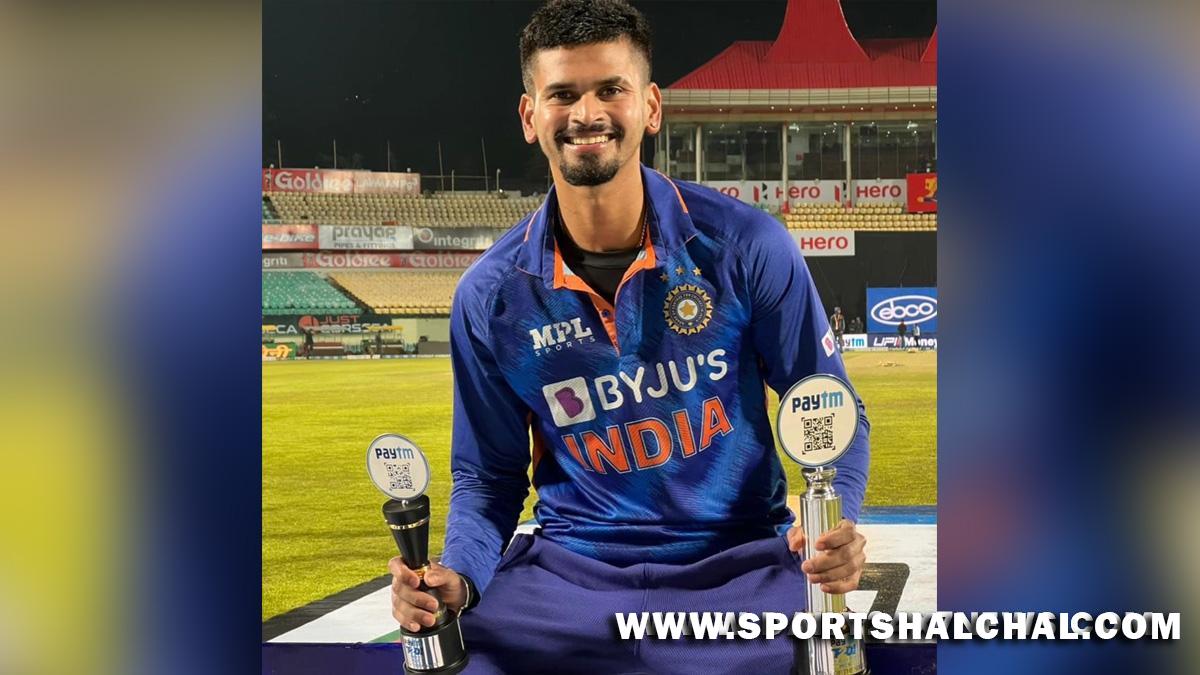 Dharamsala : India batter Shreyas Iyer firmly believes that the No.3 spot is the only place in the batting order where one can manage the tempo of the innings well.Iyer’s words come after he won the Player-of-the-Match award in the third T20I against Sri Lanka at Dharamsala for his unbeaten 75 off just 45 balls.In the three-match series, Iyer made 204 runs at a strike rate of 174 without being dismissed even once, earning him Player-of-the-Series award.”If you are playing the T20I format, if you bat in the top-3, that is the only place from where you can pace your innings really well.Otherwise, if you bat down the order, you can’t give yourself time and you need to start going from ball one. Considering the plans and preparations we are going through; we are staying positive and want to really enjoy the scenario provided on the field. If I had to say, the best number to bat for me personally, it’s obviously three,” said Iyer during the virtual press conference.With the T20Is done and dusted, India now face Sri Lanka in two Tests, first of which start from March 4 in Mohali.

For now, Iyer wants to soak in the stupendous form he had in T20Is against Sri Lanka.”Firstly, I want to cherish this moment. I have achieved a really good total in this series. I want to relax a bit, give myself time and not think much beyond because it’s something that if I start thinking from right now, I won’t be able to focus I am there on the ground right now. I am just staying in the moment now.”With Iyer’s showings, the competition for finding a place in India’s batting order becomes all the more heated. Virat Kohli had some runs alongside his name against the West Indies while Suryakumar Yadav had a sizzling show in the same series.In their absence against Sri Lanka, Iyer took his chance and grabbed it with both hands.”Coming not out in all three games was a commendable performance for myself. Expectation-wise, I am not keeping any expectations from myself because if you see the competition in our team, it is immense.

Every individual is capable of winning you games. For me personally, I just want to enjoy each and every opportunity I am provided with. I like to finish off the games and that is my mindset whenever I go out on the pitch.”Amidst all the glitter and shine against Sri Lanka, Iyer disclosed how the start wasn’t rosy for the big knocks he made later on.”In the first game itself, when I played 12 balls and was on 12 runs, I thought I need to charge on from there, because I didn’t get that proper start as compared to the last two games.”The starts I got were really good, and from there it’s easy to manoeuvre and manipulate the field. But when you don’t get starts, it’s really important you get your eyes in, and you can target a particular bowler in a given situation. That really worked out for me in the first game after a slow start.”Iyer signed off by saying he isn’t looking too far towards a permanent spot in playing eleven for the men’s T20 World Cup in Australia.”It’s way too long to think about right now. I can’t talk about cementing my place because the competition is so much. You need to be flexible in terms of batting in any position or any given situation. My mindset is just to grab as many opportunities as I can and see to it that I maximise the use of it.”