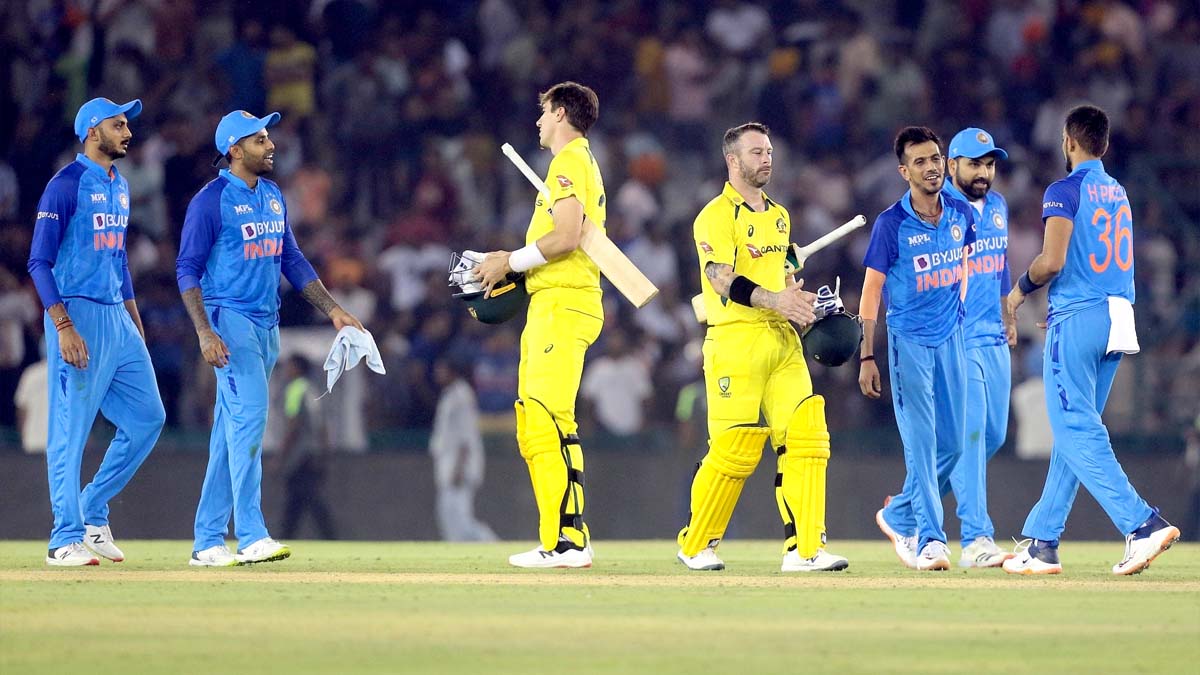 Nagpur : Both India and Australia had started the current three-match T20I series with the intention of finding the right combination for the upcoming T20 World Cup. But after the first match at Mohali, the Indians reached Nagpur for the second T20 encounter with more headaches and unanswered questions rather than solutions.

Going into the opening match, the Indian team management wanted some more inputs on the opening and middle order batting and the quick bowling options as senior pacer Jasprit Bumrah is still not ready to play while senior bowler Mohd Shami had to withdraw from the series due to a Covid positive test before the start of the series.

Though former India skipper Virat Kohli struck his 71st international century in the match against Afghanistan in Asia Cup Super Fours, the batting still did not have a settled look as opener K.L Rahul had just returned from a lengthy injury break. The question of the all-rounder in the absence of Ravindra Jadeja too was looking.

The first T20I match against Australia was to provide some answers to these conundrums. But that did not happen in the end as India lost the match by four wickets to concede a 0-1 lead in the three-match series.

The Indian batters — especially opener Rahul and all-rounder Hardik Pandya — played brilliantly and sensibly to help the team post 207/6 in 20 overs with K.L Rahul anchoring the innings with 55 and Hardik Pandya giving it a late impetus with a brilliant unbeaten 71, Suryakumar Yadav propelled the team ahead with a 25-ball 46 as India posted a big total for the Aussies to chase.

While the batters did well, the bowling — with the exception of Axar Patel (4-0-17-3) — was not that effective, and Harshal Patel and Bhuvneshwar Kumar leaked runs as Australia rode on a blazing 20-ball 60 by Cameron Green and a vital 21-ball 45 by wicketkeeper Matthew Wade. Agreed that the Mohali pitch was totally benign and did not offer the bowlers an iota of assistance, still 207 was a defendable total, as skipper Rohit Sharma said after the match.

The Indian bowlers were totally ineffective in death overs and the team did not help its cause much with some atrocious efforts on the field, dropping four catches in all.The result is that the team think tank involving skipper Rohit Sharma and coach Rahul Dravid along with senior players is left with the massive problem of putting right the bowling department.

Either they have to send Bumrah a chance to tighten the bowling attack or find a good death bowler to replace Bhuvneshwar Kumar. Bhubaneswar has in recent times conceded too many runs when bowling at the death and is on the verge of losing his reputation as a good death overs bowler.

After being expensive in back-to-back matches against Pakistan and Sri Lanka in the Asia Cup, Bhuvneshwar Kumar finished his campaign with a superb performance against Afghanistan. However, he undid that when he conceded 16 runs in the 19th over and 15 in the 17th at Mohali. With Harshal Patel, playing his first match on return from injury, giving away 22 runs in the 18th over, India conceded 53runs in overs 17th to 19th, making Australia’s job easier.

Though Umesh Yadav claimed two wickets in an over, his two overs cost the team 27 runs at an economy rate of 13.50. But then Umesh was playing T20I cricket after a substantial gap and should be given another chance. He could be a good replacement for Bhuvaneshwar in the death overs.

On the batting front, India should be expecting more from skipper Rohit Sharma and his predecessor Virat Kohli, both of whom got out cheaply at Mohali. The focus in Mohali was on Kohli as he was playing his first match after hitting his 71st century but the former India captain perished early trying to hit out Nathan Ellis.

Meanwhile, the Aaron Finch-led Australia will be bolstered by the win at Mohali and hoping to continue in the same vein here at Nagpur. They started aggressively and finished in a blaze of glory doing better than India in all sections of the game. Finch, who will be retiring after the T20 World Cup, gave glimpses of good form as he opened with a 13-ball 22, while Cameron Green hogged the limelight for his majestic knock in his first outing as an opener.

Though the visitors were missing the services of Mitchell Starc, Marcus Stoinis and Mitchell Marsh, they did well on both the batting and bowling front. Starc (knee), Marsh (ankle), and Stoinis (side) have all stayed home due to ‘minor’ injuries, alongside David Warner who had been already rested for this series.

Nathan Ellis was their best bowler at Mohali with superb figures of 3-30 from his four overs while Josh Hazelwood and Pat Cummins too troubled the batters early in the innings. Green did bowl well before Pandya carted him for three back-to-back sixes off the last three deliveries of the innings.

Australia will again look to big-hitter Tim David, who had guided them home in the company of Wade, to provide some late fireworks. Will they send Cameron Green as the opener once again?This is the first time that Australia will be playing at the new Vidarbha Cricket Association Stadium in Jamtha.The Stadium, constructed in 2008, will be hosting its first international in three years following the Covid-19 pandemic.