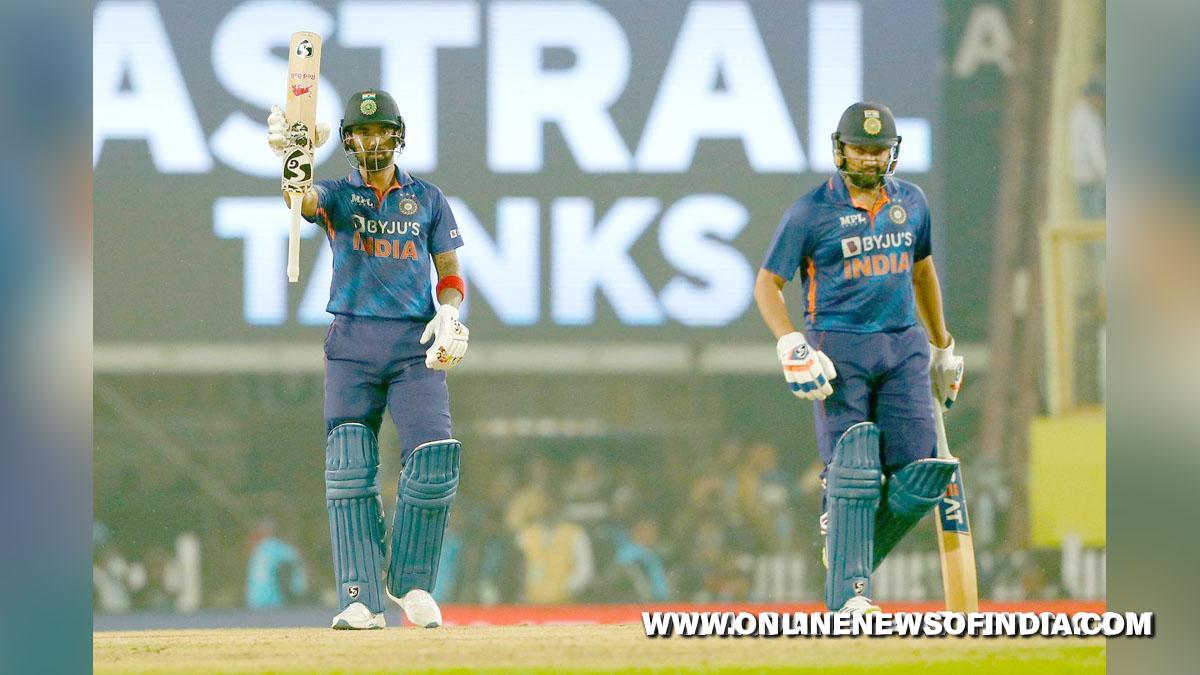 Ranchi : A superb bowling performance by debutant Harshal Patel (2/25), followed by fantastic fifties by KL Rahul (65 off 49) and Rohit Sharma (55 off 36) guided India to a convincing seven-wicket win over New Zealand in the second T20I at the JSCA International Stadium, here on Friday, giving the hosts an unassailable 2-0 lead in three-match series.Along with Harshal, Ravichandran Ashwin (1/19), Axar Patel (1/26) also did well with the ball and helped India restrict New Zealand to 153/6 in 20 overs.Chasing a challenging target, India got off to a good start courtesy of some fine shots by openers KL Rahul and Rohit Sharma. Rahul was the aggressor while captain Rohit was happy to play second fiddle as India reached 45/0 after 6 overs.Soon after the Powerplay, the opening duo continuing their brilliant form completed another fifty-plus stand. It was the 5th successive 50-run stand between Rohit and Rahul in T20Is. In search of wickets, New Zealand introduced spin and it worked well for them. Both Ish Sodhi and Mitchell Santner bowled in tandem and put brakes on the scoring rate as batters failed to find boundaries for a few overs.With the asking rate going up, Rohit decided to break the shackles and smashed Santner for two sixes in the 10th over. The skipper looked for another one but mistimed and sliced it instead but Trent Boult dropped it at long-on. India reached 79/0 after 10 overs.

After Rohit, now it was Rahul’s turn and he hit Adam Milne for a six and a boundary in consecutive deliveries to get to his fourth fifty in the last five T20I innings and 16th overall. With two back-to-back big overs, India were in complete control of the run chase and soon the opening batters took India past the 100-run mark.Tim Southee finally gave New Zealand the breakthrough in the 14th over after he dismissed KL Rahul (65 off 49), who skied a slower delivery and was caught by Phillips at deep mid-wicket. With 33 runs to get, India promoted Venkatesh Iyer at No 3 and he joined Rohit, who hit a six over fine leg fence against Milne to notch up his 25th T20I half-century. However, the Mumbai batter couldn’t carry on any longer and got out to Southee.The New Zealand skipper dismissed the next batsman, Suryakumar Yadav, in the same over as India suffered a late jolt with 17 runs needed for victory in 24 deliveries. But, Venkatesh Iyer (12) and Rishabh Pant (12) struck timely boundaries and helped India to gun down the target quite comfortably in 17.2 overs.Earlier, batting first, openers Martin Guptill and Daryl Mitchell gave New Zealand a solid start. Among the two, Guptill was the more aggressive and targeted Bhuvneshwar Kumar, taking his team to 42/0 after four overs.

Deepak Chahar gave India the much-needed breakthrough by removing the dangerous Guptill (31 from 15) in the fifth over. Mark Chapman joined Mitchell in the middle and took New Zealand to 64/1 at the end of the Powerplay.After the first six overs, the Indian bowlers slowed the run rate with their disciplined length and line. Both Chapman and Mitchell were not able to free their arms and relied on strike rotation.The pressure brought another wicket for India as Mark Chapman (21 off 17) got out to Axar Patel. The left-arm spinner dished out a flighted delivery and pitched it up as Chapman launched it straight to the fielder in the deep, leaving New Zealand to 79/2 after 8.5 overs.Spinners Axar and Ashwin along with debutant Harshal Patel kept things tight in the next few overs with Glenn Philips and Mitchell at the crease. In order to break the shackles, a low full toss from Axar was smashed by Glenn Phillips to long-off, where Venkatesh Iyer failed to grab the catch.

However, the Kiwis couldn’t take advantage of the dropped catch as Harshal got his first wicket in international cricket by dismissing Mitchell (31 off 28). It was again the slower delivery, the same weapon that made him the highest wicket-taker in IPL 2021 which worked for Patel as Mitchell holed out to Suryakumar Yadav at long-on.Tim Seifert came to bat next and tried to steady Black Caps’s ship along with Glenn Phillips, helping their team cross the 100 run mark in the 13th over. The duo added some valuable runs for New Zealand before Ashwin returned back to get rid of Seifert, who tried to play a reverse sweep but the ball went straight to short third man.Soon, Harshal Patel got rid of Glenn Phillips (34), putting New Zealand in deep trouble at 137/5 after 16.3 overs. From there on, the next few batters — James Neesham (3), Mitchell Santner (8), Adam Milne (5) couldn’t do much.The Indian bowlers took pace off their deliveries and didn’t offer anything in the arc as New Zealand couldn’t find the fence in their last 29 balls and in the end could score 153/6 in 20 overs.
Brief scores:
New Zealand 153-6 in 20 overs (Glenn Phillips 34; Harshal Patel 2/25, Ravichandran Ashwin 1/19) lost to India 155-3 in 17.2 overs (KL Rahul 65, Rohit Sharma 55; Tim Southee 3/13) by seven wickets.

Couldn’t have asked for a better debut, says Harshal after his match-winning performance