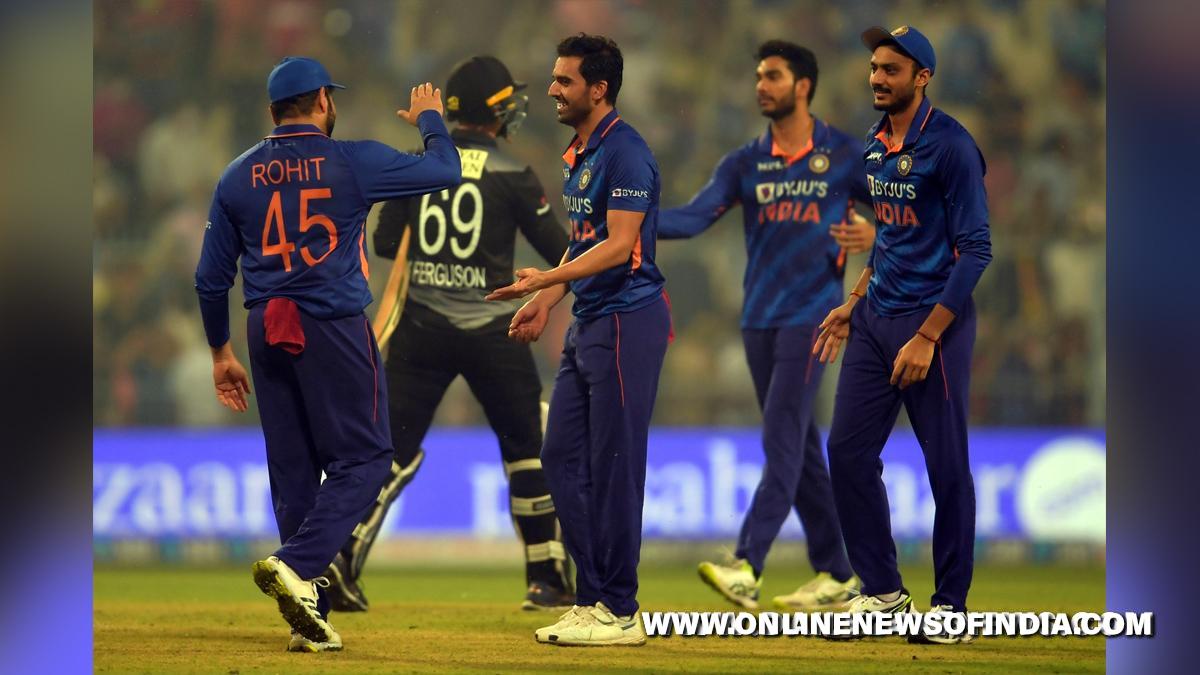 Kolkata : Rohit Sharma’s fantastic fifty and a clinical bowling performance led by Axar Patel (3/9), powered India to a convincing 73-run win over New Zealand in the third and final T20I, helping the hosts complete a 3-0 clean sweep in the three-match series at the iconic Eden Gardens, here on Sunday.This was India’s second-successive clean sweep victory against New Zealand in a T20I series, having registered a 5-0 win over the Kiwis at their own turf in January 2020. It was also the first series win for Sharma as full-time skipper and newly appointed head coach Rahul Dravid and they passed the test with flying colors.A fifty by captain Sharma (56 off 31 balls) and some late charge by the lower-order guided India to a competitive 184-7 in 20 overs. Apart from Sharma, Ishan Kishan (29), Venkatesh Iyer (20) and Shreyas Iyer (25) also got good starts but they failed to capitalise.Chasing a challenging target, New Zealand were off to a terrible start as they lost three wickets inside the Power-play. After two expansive overs by pacers, Sharma introduced Axar Patel into the attack early and he delivered for his captain. Axar struck thrice to remove Daryl Mitchell (5), Mark Chapman (0), and Glenn Phillips (0) to dent New Zealand’s chase, leaving the visitors struggling at 37/3 in six overs.

Despite losing three partners in quick succession, Martin Guptill (51) kept on playing his shots. He along with Tim Seifert (17) kept the scoreboard ticking as the Kiwis managed to go past the 50-run mark in the 9th over.Continuing his attacking batting, Guptill got to his 20th T20I half-century off 34 deliveries under pressure and kept New Zealand in this run-chase but he needed to carry on with a similar strike rate throughout the rest of the innings. Yuzvendra Chahal, who was taken to the cleaners by Guptill, came back to get the big wicket of the New Zealand opener after Sharma gave him the extra over despite being smashed.Once Guptill got out, the Black Caps’ chase got derailed as they kept losing wickets at regular intervals. Tim Seifert (17) and Lockie Ferguson (14) tried hard with the bat for the Kiwis but it wasn’t enough to save them from a huge loss. In the end, New Zealand were bowled out for 111 in 17.2 overs, losing by 73 runs.Overall, Sharma as a full-time skipper used his resources very well as Harshal Patel continued his good showing, picking up two wickets. Venkatesh Iyer also got to bowl for the first time in the series and picked up a wicket.

Earlier, batting first, opener Sharma and Ishan Kishan gave India a flying start. The duo looked in sublime touch and played some glorious hosts, taking India to 69/0 at the end of Power-play.However, the Black Caps brought in spinners after the field restrictions were lifted and it did wonders for them. Bowling the 7th over, the Kiwis’ stand-in captain Santner dismissed Ishan Kishan (29) and Suryakumar Yadav (0) in a gap of few deliveries to peg India back in the match.With two wickets falling in quick succession, captain Sharma and Rishabh Pant had the responsibility to build a new partnership. But Pant (4), who had a shaky start in the middle, mistimed Santner’s delivery to get out, leaving India in trouble at 83/3 after nine overs.From there, Sharma and Shreyas Iyer, who walked in at No 5, tried to bring India back into the game by rotating the strike regularly. During the process, the Indian captain hit his 26th T20I fifty in just 27 deliveries with a cracking four.

India wanted their captain to carry on even after his fifty, but Ish Sodhi sent Sharma (56) back with a superb caught and bowled effort.At 103-4 in 11.2 overs, India were in a spot of bother, and two Iyers (Venkatesh and Shreyas) out in the middle needed to steady the innings. They took their time to settle in and hit occasional boundaries and take India to 133/4 after 15 overs.With five more overs to go, both Iyers decided to break the shackles but they failed to do so and were dismissed in consecutive deliveries. While Trent Boult got rid of Venkatesh (20) in the last ball of the 16th over, Adam Milne dismissed Shreyas Iyer (25) in the first delivery of the 17th over.By losing crucial wickets, India lost the required momentum at the death overs and it was time for the two Patels (Harshal and Axar) to take the hosts to a competitive score. And, Harshal, who bats at the top score for Haryana, showed his batting skills and played a decent cameo of 18 runs before getting out to Lockie Ferguson in the 19th over.In the end, Deepak Chahar (21) also hit two boundaries and a six in the last over of the innings to steer India to 184-7 at Eden Gardens.
Brief scores:
India 184/7 in 20 Overs (Rohit Sharma 56, Ishan Kishan 29; Mitchell Santner 3-27) beat New Zealand 111 all out in 17.2 overs (Martin Guptill 51, Tim Seifert 17, Axar Patel (3-9) by 73 runs.