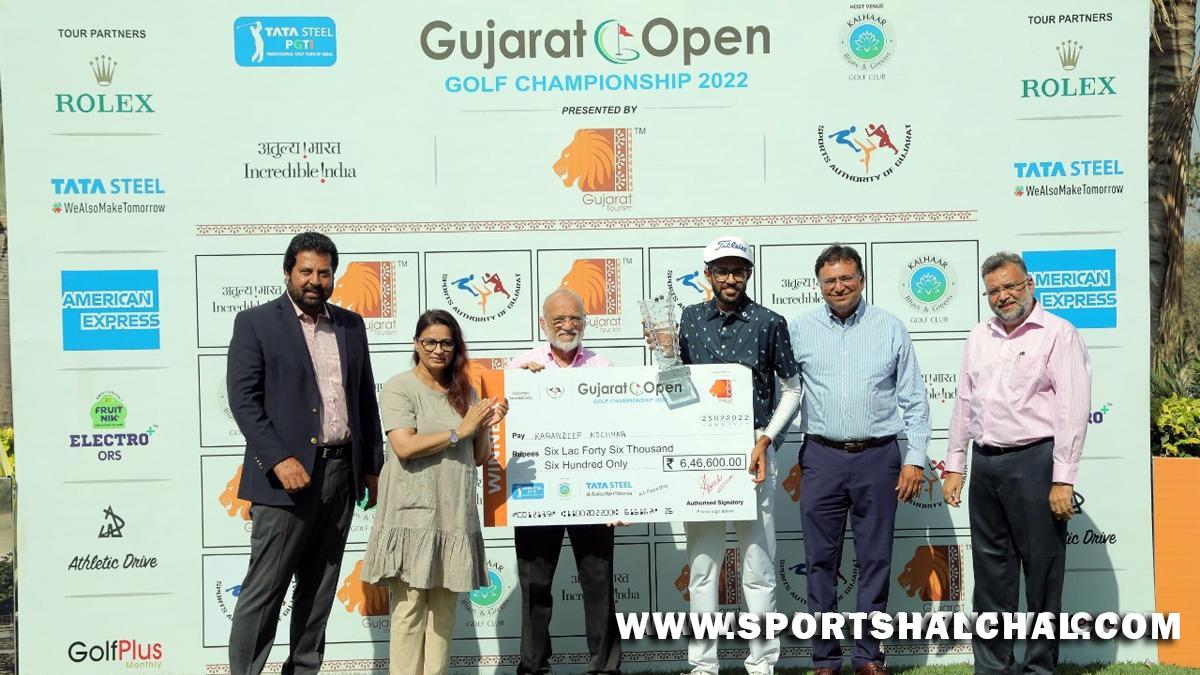 Ahmedabad: Carrying his rich vein of form from last season, Karandeep Kochhar lifted the Gujarat Open Golf title at the Kalhaar Blues & Greens Golf Club, here on Friday.Chandigarh-based Karandeep (64-75-69-70), who was overnight tied fourth and two off the lead, came from behind with a steady two-under 70 on day four to sign off with a 10-under 278 total and wrap up his fourth title at the Rs. 40 lakh event.Arjun Prasad (73-65-70-71), who like his good friend Kochhar was also overnight tied fourth, came within striking range of his maiden title before narrowly missing out. The Delhi golfer totaled nine-under 279 following a final round of 71 to secure his second runner-up finish on the PGTI.Ranjit Singh of Chandigarh, the joint overnight leader, submitted a card of 74 to claim third place at eight-under 280. Bengaluru’s M Dharma and Kapil Kumar of Delhi, the other two joint leaders after round three, shot scores of 75 to end the week in tied fourth place at seven-under 281.

Twenty-two-year-old Karandeep Kochhar, who secured second place on the PGTI Order of Merit last year courtesy his two wins, made a slow start with two birdies and two bogeys on the front-nine as his approach shot on the eighth was the highlight having landed within six feet to set up a birdie.The six-feet tall Karandeep kept himself in contention with birdies from tough spots on the 12th and 14th, both par-5s. The 15th was probably the turning point for Kochhar as he again got out of trouble with a chip-in for birdie even as his nearest rival and playing partner Arjun Prasad, fresh from a run of four birdies between the 10th and 14th, missed a 12-footer for birdie.Twenty-three-year-old Arjun, who has grown up playing alongside Karandeep before both turned professional in the same season in 2017, missed a short three-feet putt for par on the 18th that could’ve taken the match into a playoff.

Kochhar also dropped a bogey on the closing hole but held on to his one-shot advantage to emerge the winner.After winning the trophy Kochhar said, “Nothing can be better than starting a season with a win. Winning here at Kalhaar proves to me that my hitting is right up there since this course always requires good ball-striking. I put in a lot of work with my coach before the season when he asked me to trust my swing. All that work seems to be paying off now.””After a slow start to the day, I knew I was still in it as there were a couple of par-5s on the back-nine to capitalize on. I managed to score on those par-5s and added another birdie with a chip-in on the 15th that further lifted my confidence,” he added.