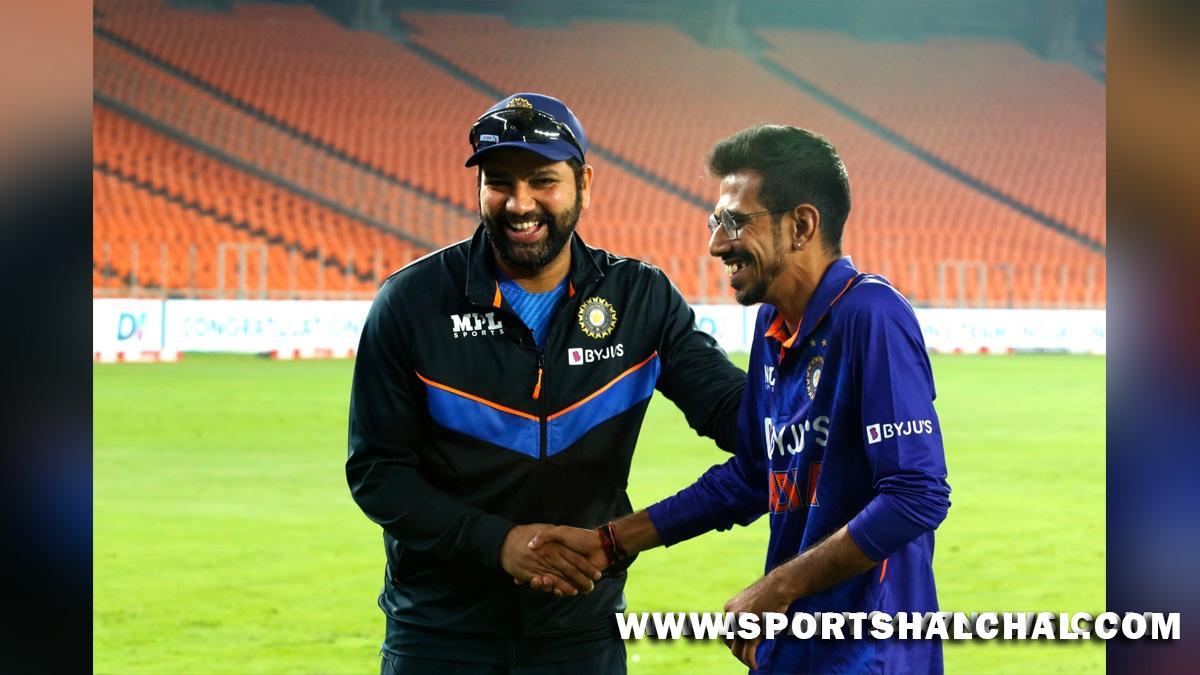 Ahmedabad : India leg-spinner Yuzvendra Chahal revealed that captain Rohit Sharma had told him to focus more on bowling googly ahead of the first ODI against the West Indies.In the match on Sunday, Chahal took 4/49 in 9.5 overs as West Indies were bowled out for just 176, which was chased down by India with six wickets in hand.In a post-match video uploaded by the Board of Control for Cricket in India (BCCI), Chahal, awarded ‘Player of the Match’ revealed to Sharma that how his pre-match insight helped him plan to bamboozle the West Indies batters, especially captain Kieron Pollard.”You had told me before the match and even I thought I missed that during the South Africa tour, I was not bowling a lot of googlies. It was in my mind that when a hard-hitter sees the ball in the slot and decides that he will hit it, I have a weapon, the googly, which is very important for a leg-spinner,” said Chahal.

“You had told me that the more googlies I bowl, my leg-spin will become more effective. I keep bowling them to you at the nets and then I realised that maybe I should try a bit more of these in the matches. I wanted to mix up the deliveries I bowl and like we planned when Pollard came in, you told me to bowl it a bit fuller. I knew that if the length was not right, there were 80 per cent chances of him hitting me for a six,” added Chahal, who had rattled Pollard’s off-stump on his very first ball to him.
Responding to Sharma’s question on the changes he witnessed while fielding at slip, Chahal disclosed that he had brought changes to his angle while releasing the ball. “I have changed my angle a bit, especially when here it is a slow wicket. When I was not a part of the team, I was thinking about the improvement I can make. I used to see that other bowlers used to get a bit side arm while bowling.

I also noticed while bowling in the nets that the release is much quicker and there is more effort from the wrist as well.”Sunday’s match was India’s 1000th ODI and Chahal made it more memorable by picking 100 wickets in the format, the second-fastest Indian spinner to reach the three-figure mark.”It feels great. My career has seen lots of ups and downs in the last five years. But it’s a very good feeling when you take 100 wickets in any format. It’s a big thing. I had never imagined I will achieve it this early. I will continue to do bowling with the same approach,” stated Chahal.Sharma signed off by telling Chahal to maintain his right mindset and joked about IPL auctions coming on February 12 and 13.”You are a key player for us, I want you to play with that mindset. There will always be ups and downs. But it is very important to play with the right mindset. And the auction is coming as well, so good luck.”

Scouting for U-17 players for Women’s World Cup was tough: Coach Ambrose