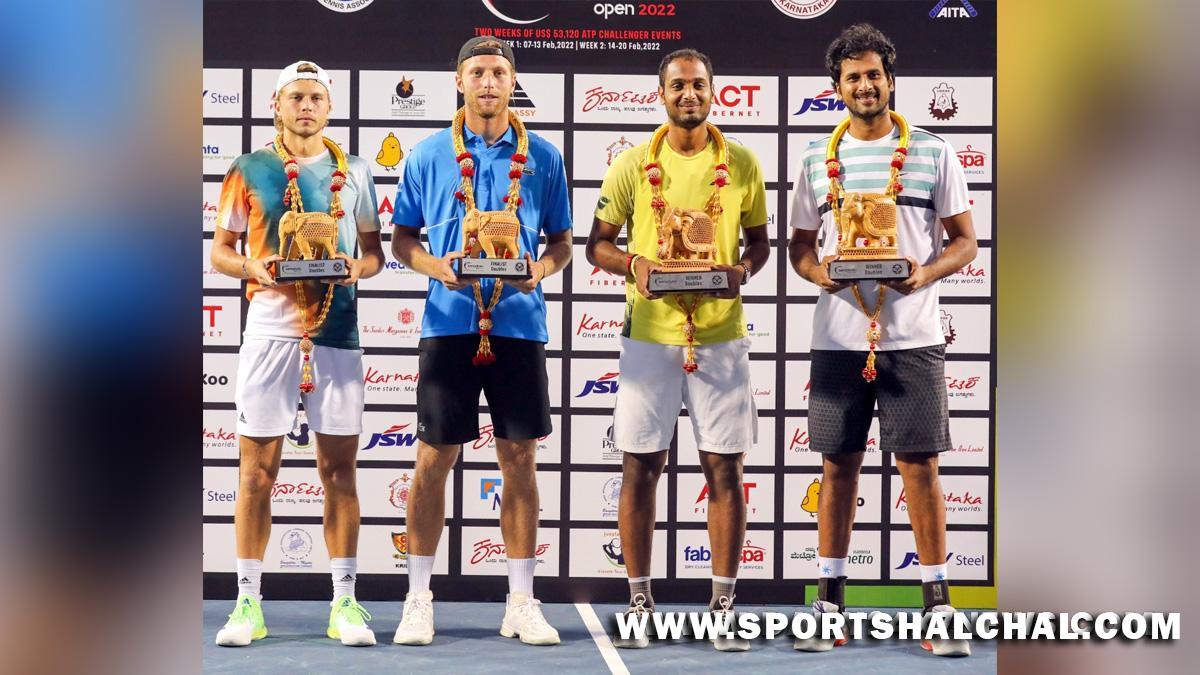 Bengaluru : India’s Saketh Myneni and Ramkumar Ramanathan lifted the doubles title of the Bengaluru Open ATP Challenger with a domineering win against French rivals Hugo Grenier and Alexandre Muller in the finals played at the KSLTA Stadium here on Saturday.Banking on the support of the local crowd, the Indian pair won in straight sets 6-3, 6-2. This was Saketh’s ninth doubles title at Challengers while Ramkumar registered a third victory in as many weeks with his victory on Saturday. Last week, Ramkumar had partnered Rohan Bopanna to the doubles title at the Tata Open Maharashtra ATP 250 event in Pune.Meanwhile, qualifier Borna Gojo of Croatia rallied brilliantly from a set down to beat Frenchman Alexandre Muller in three sets and storm into the final of the singles event. He will next clash with Taipei’s Chun-Hsin Tseng for the title. The latter scripted an upset victory over sixth seed Enzo Couacaud, also of France, with a 7-5, 6-4, after being 2-5 down in the first set to make it to the summit clash.

The combination of the fast serves of Ramkumar and the deft volleys by Saketh proved to be a deadly combination as the duo raced to a 4-1 lead before annexing the first set at 6-3. A visibly tired Muller, who had played two matches on Friday and Grenier could not contain the onslaught of winners from the Indian pair and succumbed without much fight.The Gojo-Muller match proved to be a perfect clash as both players held their serves until the ninth game in which Gojo lost his serve and eventually the set.The second set also followed a similar pattern until Gojo broke his opponent’s serve to go 5-3 up and held his serve to make his way back into the match.The momentum helped him so much that he did not give a semblance of a chance to his rival to make a comeback as he blanked Muller on the back of three breaks.In the other semi-final, after Enzo had held his serve, they traded serves in the next three games as the Taipei player trailed 2-5. Once he got his rhythm going, Tseng never looked back winning five games in a row to capture the first set 7-5.In the second set, both the players tested each other before Tseng found the break he was looking for in the fifth game to wrap up the set and match.
Results:
Men’s Singles semi-finals: q-Borna Gojo (CRO) bt Alexandre Muller (FRA) 4-6, 6-3, 6-0; Chun-Hsin Tseng (TPE) bt 6-Enzo Couacaud (FRA) 7-5, 6-4.
Men’s Doubles final: 3-Saketh Myneni (IND)/Ramkumar Ramanathan (IND) bt Hugo Grenier (FRA)/Alexandre Muller (FRA) 6-3, 6-2.