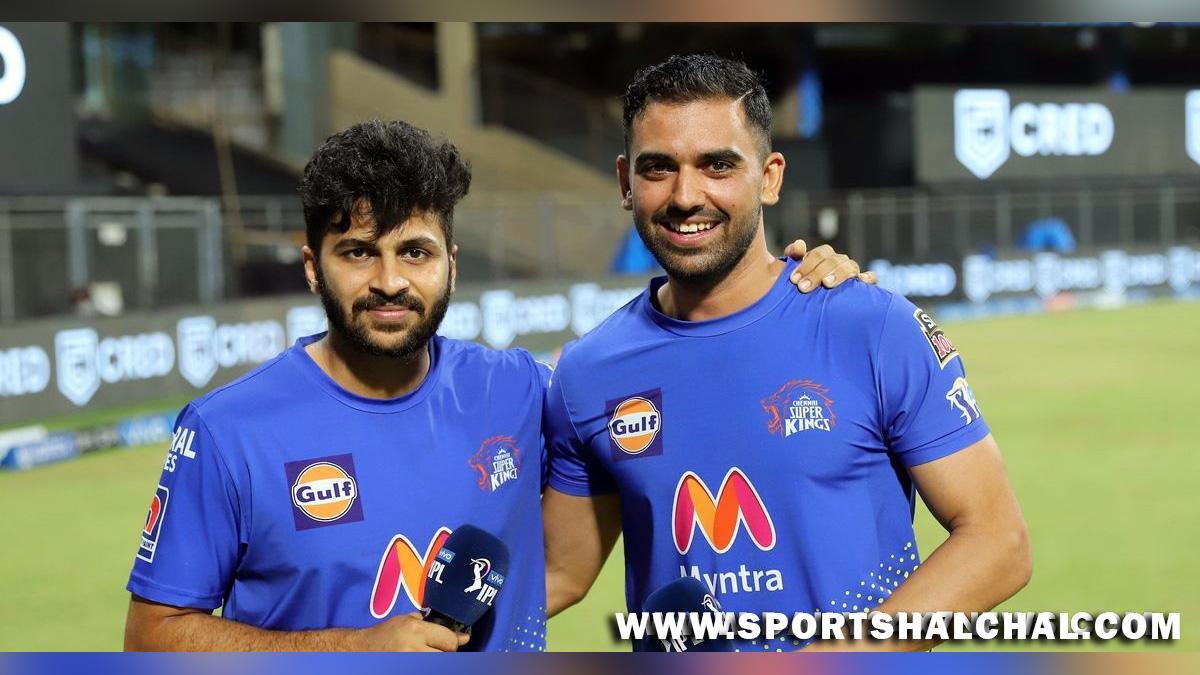 Bengaluru : Shardul Thakur and Deepak Chahar were the major highlights from the fourth round on Day 1 of the ongoing 2022 IPL Mega Auction on Saturday. While Chahar’s services were acquired by Chennai Super Kings for a whopping INR 14 crore, Thakur was picked by Delhi Capitals for INR 10.75 crore.It was a round in which some pacers, Indian as well as overseas, made a big splash due to their recent impressive international performances.The biggest of them came from Deepak Chahar, for whom Hyderabad and Delhi commenced the bidding first. The two franchises came out all guns blazing as Chahar’s value breached the 10-crore mark. Hyderabad then backed out and Chennai entered the fray. Rajasthan joined at INR 13.25 crore but Chennai was successful in buying back Chahar for INR 14 crore, continuing their association with him since 2018.

Thakur, Chahar’s former Chennai team-mate, got bids quickly from Punjab, Delhi, and Gujarat. Even Chennai joined the race for a bit before it became a two-way battle between Punjab and Delhi. Punjab stayed solid till the end but Delhi managed to get him for INR 10.75 crore. Delhi then also got Bangladesh’s left-arm pacer, Mustafizur Rahman, at his base price of INR 2 crore.Prasidh Krishna, who was Player of the Series in the recently-concluded ODI series against West Indies, attracted attention from Lucknow, Hyderabad and later Gujarat. His price escalated quickly from INR 1 crore to be snapped up by Rajasthan for INR 10 crore.Left-arm quick T Natarajan was brought by his former team Sunrisers Hyderabad for INR 4 crore, edging Gujarat Titans. Joining Natarajan in the Hyderabad camp was pacer Bhuvneshwar Kumar for INR 4.2 crore, beating competition from Mumbai, Lucknow and Rajasthan.

Overseas pacers attracted huge attention in the fourth round. New Zealand’s Lockie Ferguson drew interest from Delhi, Gujarat and Bangalore before the Ahmedabad-based franchise snapped him for INR 10 crore. Delhi then was engaged in a see-saw battle with Chennai and Mumbai to acquire Australia;s Josh Hazlewood before Bangalore entered the fray and picked him for INR 7.75 crore. England;s tearaway quick Mark Wood got strong bids from Delhi and Lucknow with Mumbai joining in. But it was Lucknow who were firm in signing him up for INR 7.5 crore.In terms of spinners, the marquee Indian spinners for the national side were picked while there was no interest for overseas spinners. Kuldeep Yadav was snapped by Delhi in a steal buy of INR 2 crore. For leg-spinner, Rahul Chahar, Delhi, Rajasthan, Mumbai and Punjab showed interest.Punjab was firm in buying Chahar despite late re-entry from Rajasthan and eventually got him from INR 5.25 crore. Yuzvendra Chahal attracted attention from Mumbai, Delhi and Hyderabad. But Rajasthan sealed the deal with him at INR 6.50 crore.Apart from Umesh Yadav, leg-spinners Adil Rashid, Mujeeb Zadran, Imran Tahir, Adam Zampa and Amit Mishra went unsold.