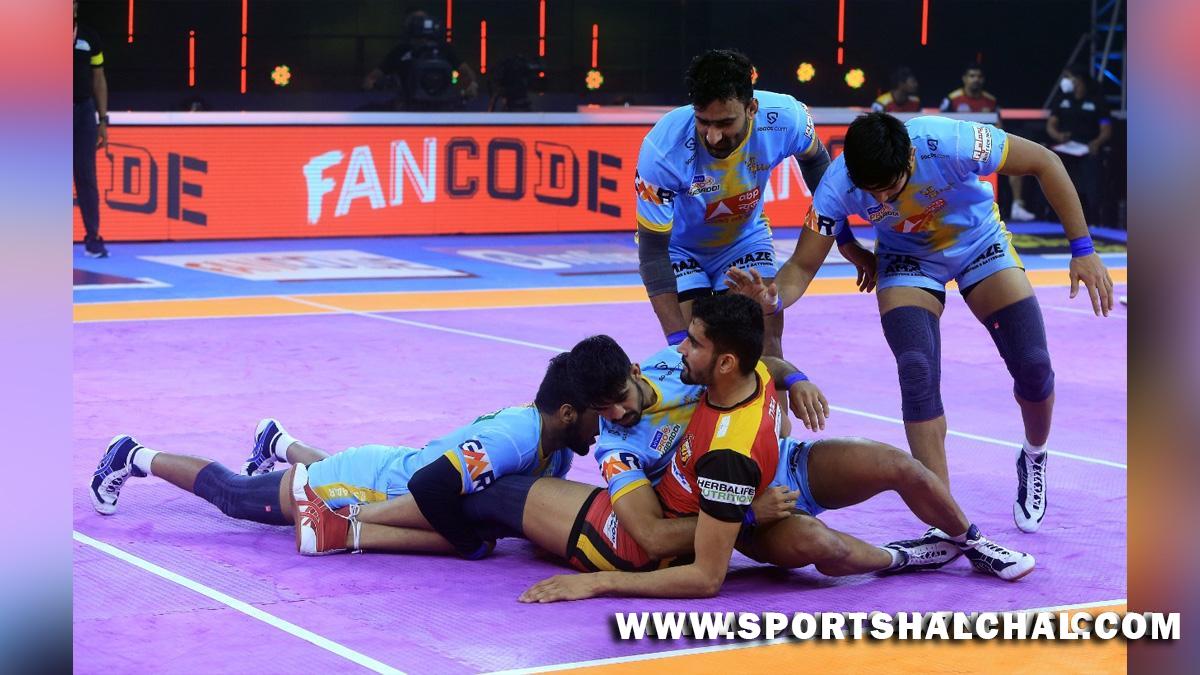 Bengaluru : Defending champions Bengal Warriors will continue their attempts to get into the playoffs when they take on take on Gujarat Giants while former winners Bengaluru Bulls will look to regain their form when they meet UP Yoddha in two crucial matches Pro Kabaddi League Season 8 on Tuesday.The Warriors are a team in form with three wins in the last four matches and are expected to give an out-of-form Gujarat side a difficult time on the mat.Gujarat suffered a morale-depleting loss against Delhi with both their raiders and defenders failing to clinch the points. Coach Manpreet Singh has tried different raiding combinations, but their attack has lacked the quality to excel in vivo PKL.Barring Rakesh’s occasional brilliance, there have been no noteworthy performances from the team’s raiders. Pardeep Kumar, who scored 7 points against Delhi, would be expected to partner Rakesh in the attack against the Warriors.The Warriors’ defence has looked better in the recent matches since the return of Ran Singh in the left corner. Bengal also played seasoned star Vishal Mane in the covers to add strength to their charges. They have a significantly better raiding unit thanks to captain Maninder Singh. He has 178 raid points this season (second-best in the league) and will be hoping his partners Mohammad Nabibakhsh and Sukesh Hegde can be back him up against the experienced Gujarat defence.

Girish Ernak in the left corner will be key for the Giants. Maninder will have a difficult night if Girish can control the left side of the mat and get enough support from the right cover Sunil Kumar.The cover combination of Parvesh Bhainswal and Sunil Kumar has often struggled against pacy raiders but Bengal’s raiding trio isn’t known for their swiftness on the mat. The form is definitely on Bengal’s side but Gujarat coach Manpreet Singh is a master at rallying his troops for important matches.Later on Tuesday, Bengaluru Bulls will lock horns with U.P. Yoddha in the second match of the night. Bengaluru, the Season 6 champions are struggling to find form in the crucial stages of the tournament and will need a victory against the well-oiled unit of U.P. to stay in the hunt for a top place finish.Bengaluru Bulls were the early-season favourites to top the league. But with one win in the last five matches, their fortunes are at the risk of spiralling down. So what has gone wrong with the Bulls? Especially when their captain and lead raider Pawan Sehrawat has scored the highest raid points in Season 8 so far.

Over-reliance on their superstar has led to the decline in confidence of other raiders. In Bharat, Chandran Ranjit and Deepak Narwal, they have a trio of well-equipped raiders who need to be given a bigger role, especially with skipper Sehrawat putting himself in dangerous positions in defence. The last few matches have seen Sehrawat taking up the cover and corner positions for the Bulls — a strange decision considering how Bulls need him on the mat to guide them.Coach Randhir Sehrawat also opted to not start their dependable defenders Saurabh Nandal and Mahender Singh in the defeat against Thalaivas. There is some issue brewing in the Bulls camp which could be an opportunity for U.P. Yoddha to halt their losing streak.Surender Gill’s heroics have not been enough for Yoddha in their recent outings. Pardeep Narwal still looks the shadow of his former best while Shrikant Jadhav has not been consistent. Yoddha’s defence produced a record-setting 22-point defensive masterclass when the sides met earlier in the season.The Bulls tend to collapse when Pawan is not on the mat and the Yoddha will need to take an aggressive approach against the raider. Surender Gill will also fancy easy points from a Bulls defence that has looked weak, especially in the left corner.