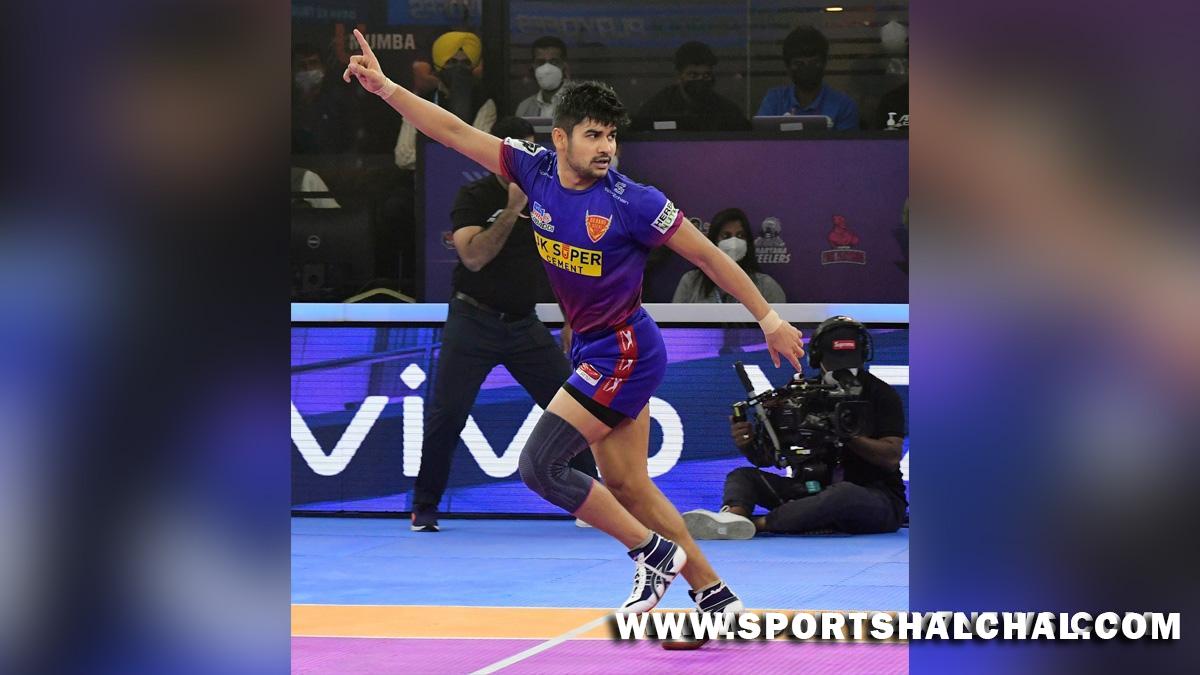 Bengaluru : Dabang Delhi reached the final of the Pro Kabaddi League season 8 after beating Bengaluru Bulls 40-35 in the second semi-final of the tournament, here on Wednesday.Naveen Kumar picked a Super 10 (14 points) as Delhi’s experienced stars registered a comeback win. Pawan Sehrawat (18 points) gave the Bulls a fast start, but Delhi secured important all-outs at crucial points of the game to turn it in their favour.It will be Dabang Delhi’s consecutive finals and they will now play Patna Pirates in the summit clash on Friday. Patna Pirates thrashed UP Yoddha 38-27 in the first semifinal.The Bulls started the match brightly with Pawan Sehrawat looking in good form. The star raider has a playoff average of over 14 raid points, and he made his intentions to attack clear right from the first whistle. But Dabang Delhi slowly got back into the game with Naveen Kumar also finding some errors in the Bulls’ defence.

The experienced Delhi defence controlled the pace of the match and despite Pawan’s best attempts, they inflicted an all-out in the 8th minute to open a 3-point lead. The Bulls immediately levelled the score thanks to a multi-point raid by Pawan Sehrawat. He secured his Super 10 by the 12th minute as the teams slowed down the attacks. Delhi’s Vijay also got into the act with a few crucial points.The scores were level at 14-14 with 5 minutes remaining in the first half. Bulls’ raider Chandran Ranjit had to be substituted after he was on the receiving end of a head collision with Delhi’s Joginder Narwal. At half time, the scores were 17-16 with the Bulls in a narrow lead.
The Bulls could not convert the man advantage into an all-out in the early minutes of the second half. Krishan’s Super Tackle gave Delhi the momentum and they backed it up by sending the Bulls’ raiders to the bench.

Mahender’s Super Tackle for Bengaluru in the 6th minute after the interval gave them a chance to stage a comeback. But Delhi raider Neeraj Narwal’s 3-point Super Raid with 13 minutes remaining once again changed the balance of the match. Dabang inflicted their second all-out with 11 minutes still on the clock to open a 6-point lead.Naveen Kumar’s 3-point Super Raid and Manjeet Chhillar’s solid ankle hold on Pawan Sehrawat ensured Delhi had a 7-point gap with 5 minutes left in the semifinal. Naveen picked his Super 10 as Delhi kept their calm in the final minutes despite high pressure from the Bengaluru raiding duo of Bharat and Pawan.Pawan made a blunder by committing an unsuccessful tackle on Naveen in the last minute. Naveen picked up easy points to secure a five-point win for Delhi and a place in the final.