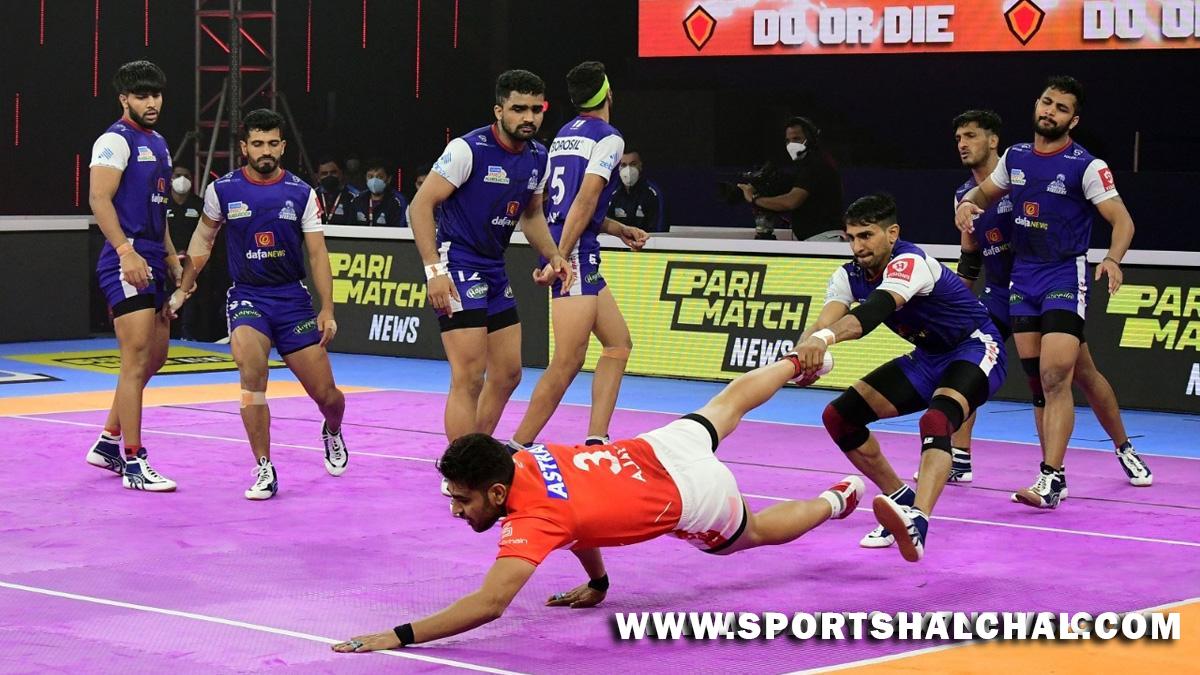 Bengaluru : Raiders Ajay Kumar and Pardeep Kumar helped Gujarat Giants beat Haryana Steelers 32-26 in the Pro Kabaddi League Season 8’s Rivalry Week, here on Monday. Gujarat dominated right from the start and gave Haryana’s defence no chance to stamp their authority. Ajay Kumar scored a Super 10 (11 points) while Pardeep Kumar fetched 10 points, including one for a tackle as Gujarat halted their losing streak against an in-form Steelers side.Their defenders had a solid game too, with the seasoned corner combination of Ravinder Pahal and Girish Ernak impressing. Haryana’s much-famed defence had a night to forget with Surender Nada struggling in the left corner. The Steelers had just five tackle points in the entire match.Gujarat coach Manpreet Singh opted for a changed line-up with Ravinder Pahal returning as the left corner. There was no room for Rakesh S in the starting seven with the trio of Pardeep Kumar, Ajay Kumar and Mahendra Rajput preferred.The raiders repaid the coach’s belief by finding easy points off the Haryana defence. They rushed to an early lead but right when they sensed an all-out, Haryana’s Jaideep produced a stunning Super Tackle.

Substitute Meetu ensured a brief fightback by the Steelers but Pardeep Kumar’s multi-point raids gave the Giants an all-out with two minutes remaining for halftime. That opened a seven-point lead and Gujarat maintained it till the end of the half with scores 19-12.The early minutes of the second half saw both sides slow down the pace of the match. Giants’ coach Manpreet Singh substituted Mahendra Rajput for Iranian defender Hadi Oshtorak. Gujarat knew they could take their time and target Haryana’s left corner Surender Nada.The experienced defender was having a torrid time with multiple unsuccessful tackles. At the other end, Vikash Kandola and Meetu took turns to fetch raid points. Gujarat had an 8-point lead going into the final 10 minutes of the match.Haryana kept picking up points as Steelers coach substituted Surender Nada and pushed Rohit Gulia to the corner position. Raider Ajay Kumar picked a Super 10 for Gujarat while Meetu looked good for Haryana, targeting Ravinder Pahal in Gujarat’s right corner. With five minutes remaining, Haryana trailed by six points but had reduced Gujarat to four men on the mat. But Gujarat defenders held firm to ensure there was no late collapse. The win will come as a big relief for the Gujarat side who have struggled in the recent past.