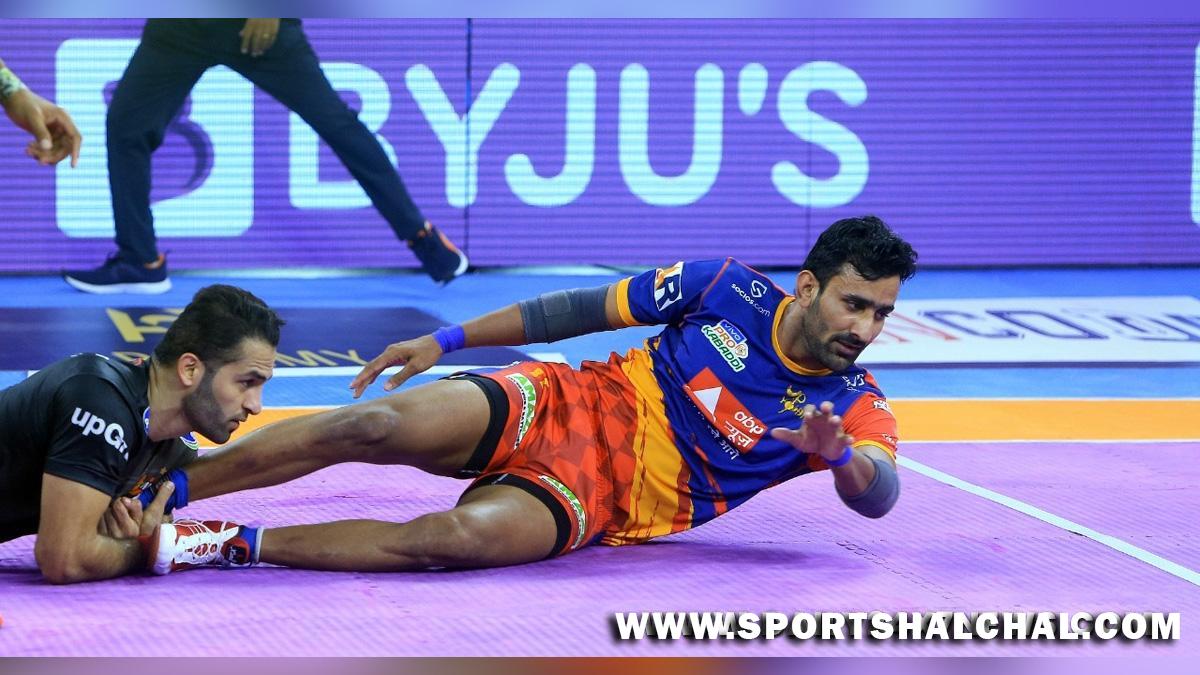 PKL 8: UP Yoddha beat U Mumba to clinch playoffs spot

Bengaluru : UP Yoddha’s resolute defence and game management helped them beat U Mumba 35-28 and reached into playoff in the Vivo Pro Kabaddi League Season 8, here on Thursday.Surender Gill was Yoddha’s top-scorer with 8 points with defenders Ashu Singh, Shubham Kumar and Sumit picking 3 points each. The loss meant curtains for Mumbai’s campaign. They became the 4th team to fall out of the playoffs race.Mumbai’s raiders Ajith Kumar and Abhishek Singh could not find a way past a well-oiled UP defence marshalled by captain Nitesh Kumar.U Mumba needed a win to stay in the hunt for a playoff spot but it was Yoddha who started on the front foot. Pardeep Narwal scored a 3-point Super Raid in their first raid of the match to set the tone. One could see the desperation in the Mumbai defence as they made unnecessary mistakes.

Ajith Kumar’s 2-point raid in the 8th minute gave them a mini-revival but Yoddha kept piling on the pressure. Both defences opted for aggressive positioning on the mat and as a result, the raiders struggled for bonus points. Rinku’s Super Tackle on Pardeep Narwal with 3 minutes remaining to half time helped them stay close to Yoddha.
But Surender Gill kept chipping in with important raid points and revivals as Yoddha inflicted an ALL OUT with 1 minute to half time. That opened an 8-point lead. Mumbai tackled Pardeep Narwal in the last move of the half and entered the break with the scores 18-12.Mumbai approached the mat with greater intensity in the second half. They tackled every UP raider who came their way. Abhishek Singh also got in the act with a 2-point raid that helped Mumbai clinch an ALL OUT in the 7th minute after the restart.

Mumbai’s left corner Rinku picked up his High 5 as Mumbai levelled the scores (20-20).Surender Gill thought he gave Yoddha an advantage with a 3-point Super Raid with 10 minutes remaining. But Ajinkya Kapre immediately wiped its effect away with a 2-point raid for U Mumba.Mumbai sustained their aggressive defence with Fazel Atrachali and Rahul Sethpal also contributing to the points. With 5 minutes remaining, the scores were 27-26 with Mumbai leading by a solitary point.Substitute Shrikant Jadhav picked up important raid points for U.P. as they opened a 3-point lead with a minute remaining. That changed the momentum once again. Mumbai could not find a way past the Yoddha defence in the dying minutes and needed 3 points to tie the match in the final move of the match. Surender Gill had other ideas and clinched a 4-point raid to inflict an ALL OUT.