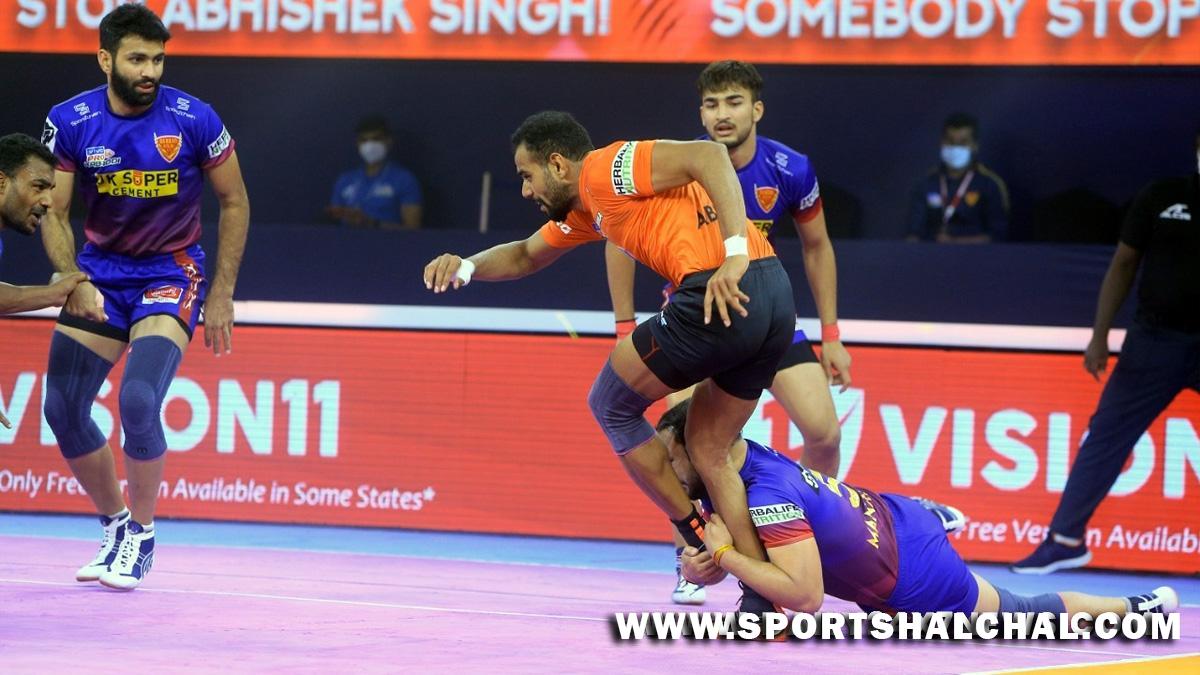 Bengaluru : Dabang Delhi K.C. showed great composure to clinch a 36-30 comeback win against U Mumba in the second match of Day 2 in Pro Kabaddi League Season 8’s Rivalry Week. The scores were level with five minutes remaining, but substitute Neeraj Narwal’s raids helped the Delhi team clinch an all-out in the final minute and eventually win the encounter.Delhi all-rounder Vijay scored 12 points (including one for a tackle) and was ably supported by defender Manjeet Chhillar with four points. U Mumba lacked the lethal edge on the night to lose against arch-rivals Delhi for the second time in Season 8.The first half was a cagey affair with both defences ensuring the raiders had a tough day on the mat. Rahul Sethpal was a notable absentee for the Mumbai team while there was no Naveen Kumar once again for Dabang.Delhi started the match on an aggressive note with their experienced stars Manjeet Chhillar and Sandeep Narwal looking their best. They moved to an early lead and reduced to Mumbai to two men on the mat by the 10th minute.But U Mumba produced two Super Tackles to shift the balance of play. Fazel Atrachali was in the thick of things as Mumbai staged a comeback to level the scores with three minutes remaining. Substitute Shivam scored three points coming off the bench for U Mumba.

The first half ended 12-12 but more importantly, Delhi had just two men on the mat.U Mumba clinched their first all-out in the second minute on resumption to open a two-point lead. Both teams continued to match each other blow for blow despite the all-out. Abhishek Singh and Ajith Kumar fetched important raid points for Mumbai while Ashu Malik did the same for Delhi.Mumbai only had a one-point advantage at the first Time Out in the 10th minute with the match evenly poised. Both teams, fighting for important positions on the points table, knew a mistake could cost them dearly.The scores were 25-25 with five minutes remaining as both teams played a patient game to entice an error. An ankle-hold on Ajith Kumar by Sandeep Narwal made it a two-point lead for Delhi with three minutes on the clock. Delhi’s Neeraj Narwal then produced a two-point raid with a wonderful dubki, which eventually led to an all-out in the last minute and a five-point lead.Vijay clinched his Super 10 as Delhi secured the win and the bragging rights in the battle of India’s biggest metro cities.