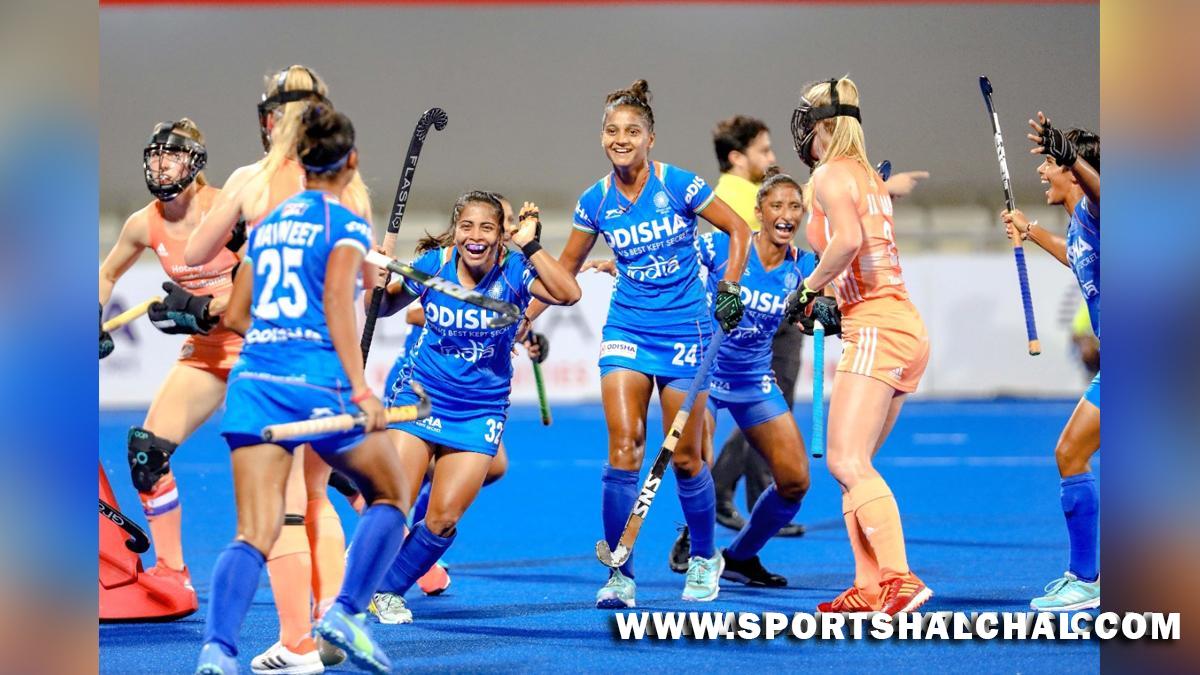 Bhubaneswar : India registered their first win against reigning World and Olympic champions the Netherlands in over a decade with a clinical 2-1 verdict in an FIH Women’s Hockey Pro League match at the Kalinga Stadium, here on Friday.The Netherlands came into the contest against India with a long winning streak in the FIH competitions, with their last loss coming against Argentina in the FIH Hockey Pro League back in 2020. But with a much-changed team filled with youngsters, they more than met their match against an experienced Indian team.With eight players making their first appearances for the Dutch national team, the visitors did not start the game as overwhelming favourites that they usually are.The Dutch youngsters started the game in a dominant fashion, bossing possession and territory for the first 10 minutes, which also yielded three penalty corners. Those corners were well defended by Indian captain Savita as she kept the score level and India survived the initial threat and started to find their way into the game.India’s first real attack came in the 11th minute and it led to their first penalty corner. While the Dutch had not managed to find a way past the Indian defence on their three penalty corners, India found a goal right away.

Gurjit Kaur, whose shot was saved initially, found herself with the possession off the rebound. She calmly worked her way in and passed it to Navneet whose cross in the circle required just a touch from Jyoti and India had an unlikely lead.The first goal gave India the confidence they needed and they won the mid-field battle for the rest of the first half, with their half-press that closed off attacking routes for the Netherlands.The Netherlands still found their way into the Indian circle from time to time, but often it was through the flanks with not much support available centrally.India scored their second goal of the game too, thanks to another penalty corner that was first saved by Remmerswaal, but the ball got stuck under her foot and by the time she could gather her footing, it had been taken away by Sonika and placed into the back of an empty goal, with less than two minutes remaining in the half.India started the second half on the front foot as well and nearly found a third goal through Jyoti, but her attempted shot at a bouncing ball went just wide of the post to the left.The Netherlands finally breached the Indian goal through a penalty stroke by Jansen, after her flick had deflected towards goal and struck Monika on the goal line.

With just a one-goal deficit to overcome in the final quarter, the Netherlands started the final 15 on the front foot, but once again the experienced Indian team frustrated their young counterparts with a disruptive press along the half-line.The Dutch had a couple of chances and shots, but none too threatening, and were dealt with calmly by the experienced trio of Gurjit Kaur, Navjot Kaur and Savita.The final three minutes that often get frantic in close games, were coolly handled by the Indian team as they kept hold of possession high in the Dutch half and the clock finally ran down, ending the Netherlands’ long-winning run.Navneet Kaur, playing in her 100th match for India won the player of the match award and said, “Happy with the 100th cap and really happy for the team for this impressive win, hopefully, we can do the same again tomorrow.”Dutch captain van Laarhoven said she was not too disappointed with the result, adding: “We are a young team so it will take a little time to find the right rhythm. We played well enough and just needed to convert more of the chances. Hopefully, we can do that tomorrow.”Both teams will be back in action on April 9 at the Kalinga Stadium.