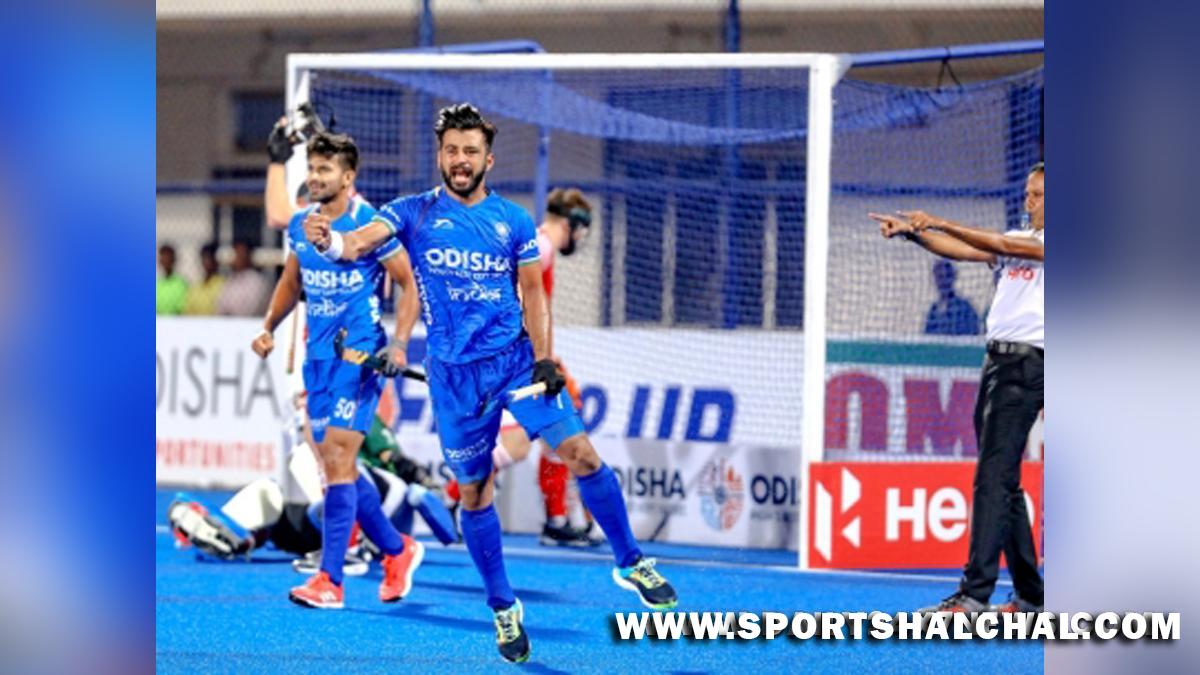 Bhubaneswar : Drag flicker Harmanpreet Singh scored a hat-trick and in the process completed a century of international goals as India beat England 4-3 in an FIH Pro League match here on Sunday.Harmanpreet Singh converted penalty corners in the 25th, 26th and 42nd minutes as India came back from a goal down to register their sixth match in 10 outings. Former skipper Manpreet Singh scored the other goal for India as they consolidated their position at the top of the table with a clinical performance.For England, Liam Sanford, David Coudon and Sam Ward scored off penalty corners but in the end, their efforts proved insufficient as India emerged the winner.India, who had won the first clash in the double-header 3-2 in sudden death shoot-out on Saturday, thus consolidated their position atop the league table, moving to 21 points from 10 matches. Germany, India’s next opponents a couple of weeks later, are second with 17 points from eight matches.

England were placed 7th with seven points from six matches.Graham Ried’s team, who were lucky to beat England in the shoot-out and claim a bonus point in the first match of the double-header at the Kalinga stadium, forced their way back from a goal down on Sunday and then overcame the English in a well-fought encounter.England went ahead in the sixth minute when Liam Sanford converted a penalty corner. But the Tokyo Olympics bronze medallists equalised on the stroke of the first quarter as Manpreet scored off a rebound during an indirect penalty-corner routine.Harmanpreet Singh got into the act 10 minutes into the second quarter as he blasted a low drag flick past the England goalkeeper James Mazarelo, who started the match in place of Olivier Payne.

A minute later it was 3-1 for India as Harmanpreet Singh struck again, with another superb drag flick.The Indians created a couple of good chances in the second quarter as they went into the breather leading 2-1.England had more ball position in the first half but India created better chances. They had 18 circle penetrations to seven by the visitors and had taken six shots at the goal as compared to three by England.The second half was more evenly matched and though England were more attacking, the Indians held their own.England made it 3-2 in the 38th minute when David Condon scored off a penalty corner.Harmanpreet made it 4-2 and completed his hat-trick in the process, going from 99 to 102 career goals.England pulled one more goal back a minute later when Sam Ward scored with a fine shot off a short-corner.In the end, India survived some sustained pressure by England to claim three points.The hosts will next take on Germany on April 14 and 15.