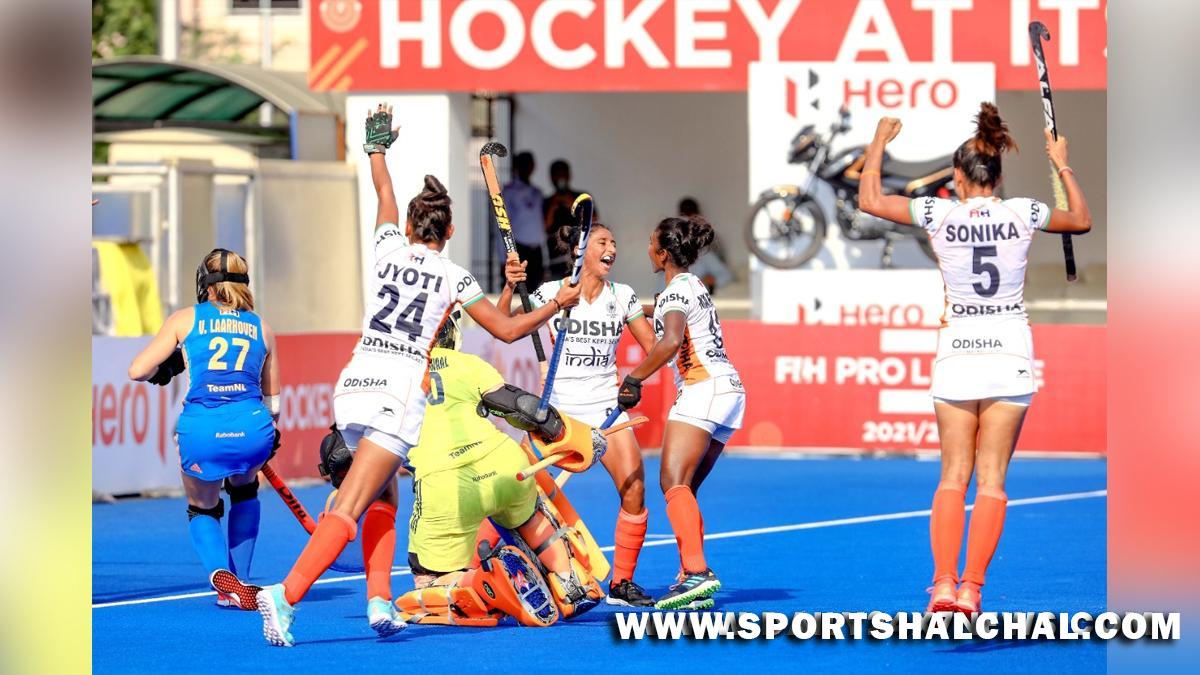 Hockey Pro League: India go down to Netherlands 1-3 in a shoot-out

Bhubaneswar : With just six-odd minutes to go in the final quarter, a brilliant drag-flick by Gurjit Kaur bounced off the crossbar as the India women’s hockey team was held 1-1 before the Netherlands went on to win the shoot-out 3-1 to claim the bonus point in the second match of the FIH Pro League doubleheader at the Kalinga Stadium here on Saturday.Having won the first match 2-1 on Friday, India came out with purpose and it took them a total of 34 seconds to get their first goal. Their attack from the starting whistle led to a penalty corner that was deflected by a Dutch defender and then turned in by Rajwinder in front of the goal.It was a perfect start for India, and not what the Netherlands were looking for after a close loss in the previous game. India, confident from the goal, took control of the game and their high press turned the ball over, often in the Dutch half at the Kalinga Stadium here.The Netherlands finally found their feet in the game at around the 12-minute mark and they forced the Indian team to retreat into their own half as the first quarter came to a close.

Second-quarter again saw momentum swing India’s way, to begin with, as they won the midfield battle, cutting off the passing lanes that the Netherlands like to use to build their attacks, but with the conditions taking their toll, the Netherlands finally started getting the better of India to close the first half and forced skipper Savita into three saves in the final two minutes, but she was up to the challenge and the hosts took the one-goal lead into half-time.The trend continued in the third quarter too with Jyothi and Monika both missing scoring opportunities.The 4th quarter, however, saw the match swing again as the Netherlands, desperate for an equaliser, started instituting a high press of their own. They finally managed to claim possession and earned a slew of penalty corners.Savita, though kept the Indian lead intact with save after save from the penalty corners, but the Dutch were unrelenting. They finally got a goal back through captain Yibbi Jansen in the 53rd minute, who finally got a lot of power behind one of her flicks and Savita couldn’t react in time to stop the ball sailing over her right shoulder.

Within the next minute, India earned their third penalty corner and nearly took the lead. Gurjit Kaur unleashed a brilliant drag-flick but were unlucky as it came off the crossbar and was cleared by the defenders.In the shoot-out, the Netherlands went first and scored through Jansen who calmly slotted the second shot in after Savita had saved the first one. Jyoti and Neha missed the first two shoot-out attempts for India, while Fortuin scored the 2nd attempt as well for the Netherlands, leaving India with a mountain to climb.Savita thwarted Morgenstern’s attempt and Navneet followed it up with a calmly taken goal of her own. But Barentsen scored the 4th attempt for the Netherlands and another great save by Remmerswaal from Rajwinder’s attempt sealed India’s fate as the Netherlands took the extra point from the contest.Indian captain Savita wasn’t too disappointed with the result, saying: “Shoot-outs are a bit of a coin toss, and the Netherlands were very clinical in their attempts today. Overall, the draw in regular time felt about right, because while we started well Netherlands were really attacking in the end so the draw was a fair result,” she was quoted as saying the FIH in a release on Saturday.FIH Hockey Pro League action will continue in Bhubaneswar next week as Indian men take on Germany on April 14 and 15.