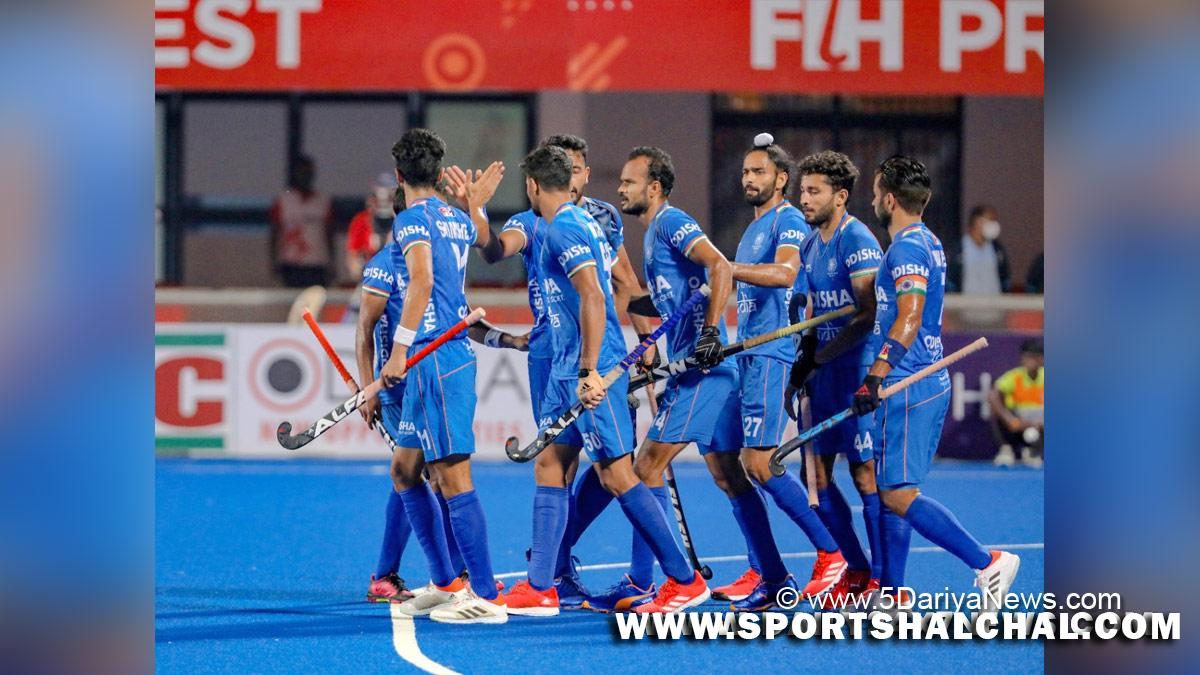 Bhubaneswar : India snatched victory from the jaws of defeat, coming back from 1-4 down to level scores at 4-4 before converting a penalty stroke with five seconds to go as they emerged 5-4 winners in their FIH Hockey Pro League match at the Kalinga Stadium here on Saturday.With skipper Marc Miralles scoring a hat-trick, Spain led 4-1 after the 40th minute but the Indians came fighting back in the third quarter, scoring four goals in 19 minutes to snatch a memorable victory. Harmanpreet Singh scored two goals for India while, Shilanand Lakra, Shamsher Singh and Varun Kumar scored one each for India. Both teams enjoyed equal ball possession but the Indians had more circle entries (30) than Spain and shots at goal. They also earned six penalty corners as compared to five by their opponents.India looked down and out at the half-time trailing 1-3 after allowing Spain to take an upper hand in their two match mini-series.

Spain skipper Marc Miralles scored twice in the second quarter after Harmanpreet Singh had planted a superb drag flick into the Spanish goal to cancel out Pau Cunill’s opening goal for Spain off their second penalty corner. India had a goal disallowed early in the first quarter when Harmanpreet Singh’s drag-flick was judged to have hit a Spanish defender over his knee on way to the goal.Miralles first shot in a penalty corner rebound, sneaking the ball through PR Sreejesh’s legs and then beating the Indian custodian off a penalty stroke, given when Mandeep Mor fouled Enrique Gonzalez inside the shooting circle, to make it 3-1 just before the breather.And the writing on the wall became more prominent when Miralles completed his hat-trick in the 40th minute by slamming the ball home from the edge of the circle after Pau Cunill’s drag-flick was blocked by an Indian defender. Initially umpire Raghu Prasad thought that Miralles took his shot from outside the shooting circle but had to change his decision as the video umpire judged that the ball was on the line when the Spanish skipper hit it.

India went on a goal-scoring spree after that, scoring twice within two minutes to make it 3-4 Shilanand Lakra capitalised on a superb move to ‘eat Spain’s experienced goalkeeper Mario Garin to make it 2-4 and then Shamsher Singh scored off an indirect penalty corner routine after the ball was not stopped properly, to make it 3-4 and the hosts were on the ascendancy and threatening to score more goals.They did just that in the fourth quarter when Varun Kumar, playing his 100th match, converted their fifth penalty corner in the 55th minute to make the scores 4-4. With five minutes to go, the two teams launched some good attacks and missed a chance each.Just when it looked like the match would go into the shoot-out, India were awarded a penalty stroke when Pau Cunill fouled Mandeep Singh inside the shooting circle and in position to take a shot at the goal. Harmanpreet Singh stepped up to convert the penalty stroke to seal a memorable victory for India.