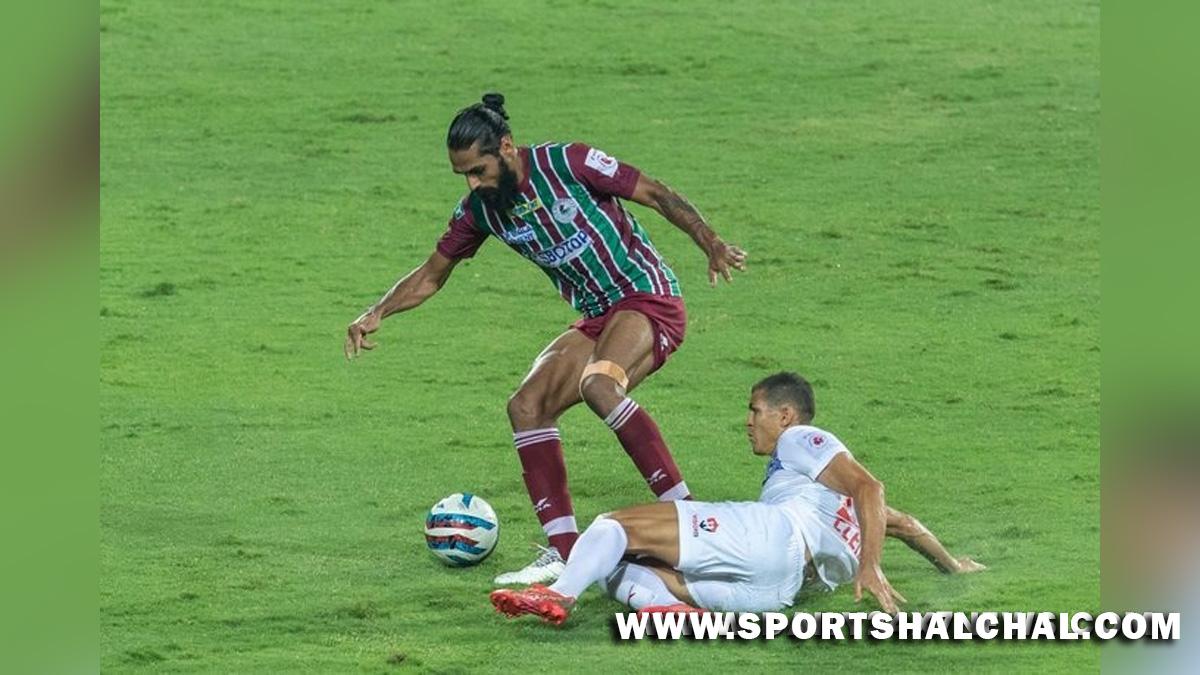 Fatorda (Goa) : ATK Mohun Bagan took a major step towards ensuring a semifinal spot with a 2-0 win against Bengaluru FC in the Hero Indian Super League (ISL) at the Jawaharlal Nehru Stadium, here on Sunday.The defeat ended all hopes for the Blues of making it into the top-four. As for the Mariners, they remaines third, level on points with second-placed Jamshedpur FC.Liston Colaco (45+1′) scored his eighth goal of the season from a sensational free-kick to give his team the lead. Manvir Singh (85) added a second late in the game to put the result beyond doubt.An early chance saw Liston Colaco testing Lara Sharma from a direct free-kick, but the goalkeeper was steadfast in collecting the ball. On the other end, Cleiton Silva threatened to score but managed to send his volley above the crossbar. At the half-hour mark, Sunil Chhetri was left unmarked in the box but his header went off-target, much to his disappointment.The Mariners suffered a setback in the first half as Hugo Boumous was substituted at the stroke of the 40th minute, possibly due to an injury.

Just when it looked like both teams will go into the halftime break without scoring a goal, the deadlock was broken with a moment of individual brilliance. Liston Colaco’s powerful direct free-kick beat Sharma in the goal to give the lead to ATKMB right before the halftime whistle.Nine minutes after the restart, Manvir Singh found acres of space behind BFC’s backline, but poor decision-making on his part saw his shot getting blocked. Moments later, Colaco was serviced by Kauko but saw his shot hit the left post. The BFC head coach made a truckload of changes in order to save the season and turn the game around near the hour mark.The Blues dominated more of the possession in the final stages of the match but struggled to create clear scoring chances. To end any hopes of a comeback, Manvir scored against the run of play in the 85th minute with a precise finish in the bottom left corner. There was no fight left in the BFC camp after the strike and the Mariners secured the win with ease.ATK Mohun Bagan will lock horns with Chennaiyin FC in their next outing at the PJN Stadium on Thursday whereas Bengaluru FC will play SC East Bengal in their last league game of the season at the Tilak Maidan Stadium on Saturday.