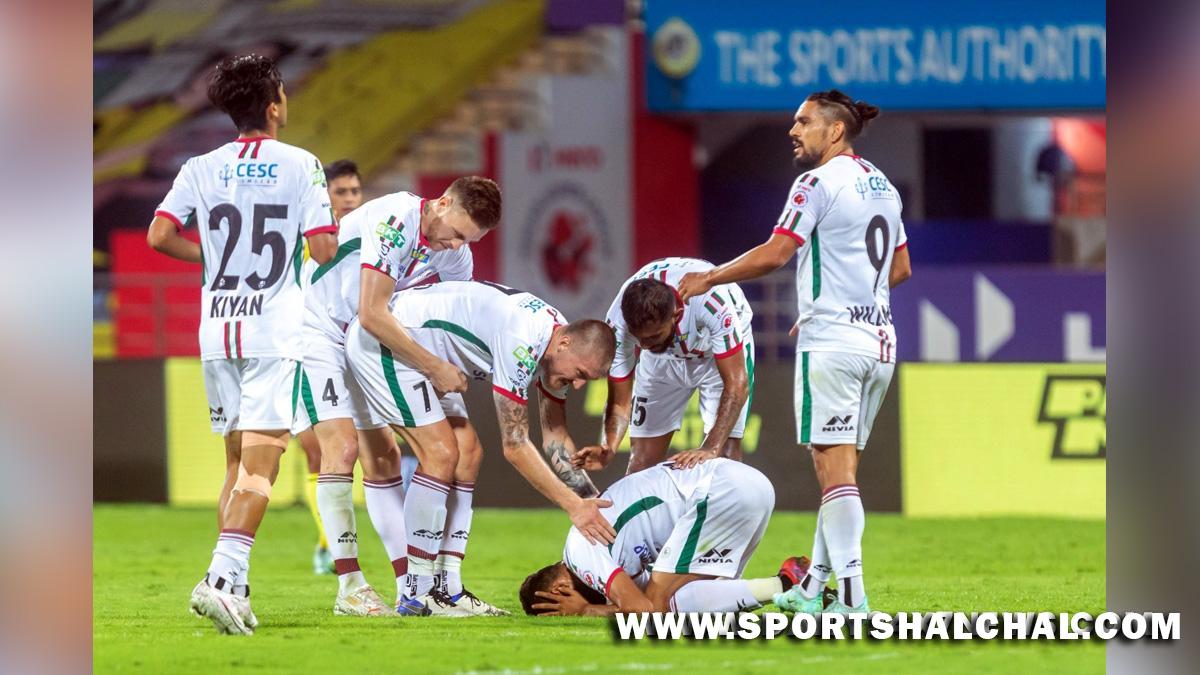 Bambolim (Goa): ATK Mohun Bagan extended their unbeaten run to nine games and broke into the top-four with a 2-1 win over Hyderabad FC in the Indian Super League (ISL) at the Athletic Stadium, here on Tuesday.After a barren first half, Liston Colaco opened the scoring for ATKMB in the 56th minute with Manvir Singh (59th) doubling their advantage in the next three minutes. Joel Chianese (67th) pulled one back for Hyderabad but could not muster another goal as they succumbed to their third loss of the season, still remaining top of the table with 26 points from 15 games. ATK Mohun Bagan moved to the fourth position with 23 in their kitty from 13 games.Both teams started slowly but upped the ante as the match progressed. ATKMB looked the more promising side with Hugo Boumous creating a lot of chances. The Frenchman looked in the mood and combined well with Liston Colaco and David Williams as the Mariners looked to prise open Hyderabad’s defence.

Boumous forced Laxmikant Kattimani into a good save while at the other end Amrinder Singh kept Bartholomew Ogbeche at bay. Hyderabad were on the backfoot in the face of constant ATKMB probing. Against the run of play, Nikhil Poojary shot just over from a Joel Chianese low cross.The Mariners suffered a double setback when the excellent Boumous and ever-dependable Carl McHugh picked up injuries and had to be replaced by Joni Kauko and young Kiyan Giri respectively. Close to half-time, Colaco and Chianese had attempts straight at the keeper.The second half started on a frantic note, Rohit Danu finding the crossbar in his way after he fired a poor ATKMB clearance from a Hyderabad free-kick.Soon after, ATKMB took the lead. Williams was on his bike off a counter-attack, finding Colaco who darted down the channel, cut back and curled the ball at the far post, leaving Kattimani with no chance.

It was Colaco’s sixth goal of the campaign as he found the net against his former side with aplomb.Three minutes later, Manvir doubled the team’s tally. This time Joni Kauko fed Manvir with a beautiful ball for the latter to beat an onrushing Kattimani and slot the ball into the back of the net with ease.Stung by the double blow in quick succession, Hyderabad went on the offensive and got their reward when a powerful Joao Victor free-kick was punched only as far as Chianese by Amrinder, the Australian then guiding the ball inside the goal.Hyderabad coach Manolo Marquez brought in Javier Siviero in place of Victor with fifteen minutes remaining on the clock in search of the equaliser. Danu saw his shot saved by Amrinder moments after as the yellow army pulled no punches.Colaco then missed a sitter with an opening goal in front of him after he and Nassiri exchanged passes inside the goalmouth. Danu also missed a good chance to score from Akash Mishra’s cross before Colaco fluffed his lines from close again, Nassiri crossing the ball to him.