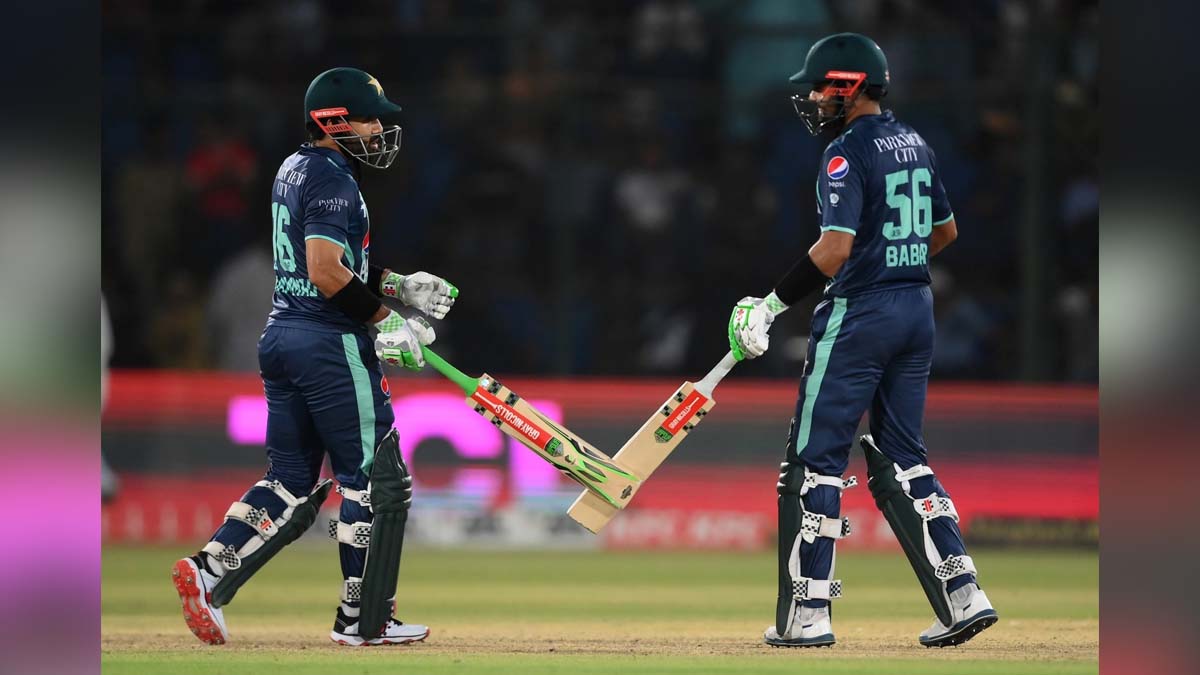 Karachi : With a lot of criticism around the opening pair of Pakistan captain Babar Azam and wicketkeeper Mohammad Rizwan’s batting approach, the duo countered all the unkind remarks against them with an unbeaten opening partnership, as Pakistan chased down 200 to beat England by 10 wickets and level the seven-match T20I series 1-1.

After making 199/5 in 20 overs on a slow pitch, England must have fancied their chances of keeping Pakistan to a low score. But Babar, who struck an amazing 110 off 66 balls, and Rizwan, who hit 88 off 51 deliveries, came out all guns blazing to script a thumping victory for Pakistan with three balls to spare.

During their match-winning stand of 203, Babar and Rizwan surpassed the tally of 1,743 runs by the Indian pair of Shikhar Dhawan and Rohit Sharma to gain the record for most runs by an opening pair in T20Is with 1,929 runs.

After the match, Rizwan revealed that faith between him and Babar, which sometimes is blind belief, is the secret to their success as an opening pair.”We have a lot of belief in each other. Somewhere, we blindly trust each other.

If he says that we have to go after the bowling, then I understand why he is saying that, which shows how strong the communication is between us. In this innings, at the start, I was hitting the ball well.

After that, he also found his groove and then we went all the way,” said Rizwan in the video released by Pakistan Cricket Board (PCB) on their official Twitter account.

Babar too agreed with Rizwan’s views. “Our aim is to build partnership and set a platform for our middle order which can make their job easier. The planning is such that we look to get 80 or 90 off the first ten overs. Accordingly, we decide when we have to execute our plans and take our chances.”

“Sometimes, one of us is hitting the ball really well, so we communicate inside accordingly. We talk a lot to each other in the middle and that helps. We know that if we are there till the end, we can score 10-15 runs an over. When you are set, you are able to finish it at the end.”

Rizwan admitted that Pakistan hadn’t got good results in big tournaments, like finishing as runners-up in Asia Cup 2022. But he credited the team management, led by head coach Saqlain Mushtaq, for keeping the side united.

“When you are playing regularly, like we are playing seven T20Is right now (against England), there will be wins and losses. The thing is, that the team makes efforts and people should see that. I admit that we have not been able to deliver the results in big tournaments. But fans love us as they feel the team is united and putting in the effort.”

“The management has worked wonders too. I do not consider Saqlain (Mushtaq) bhai as head coach. I say he is like a father figure to our team and all the players. The captain here (Babar Azam) is like a brother which is why the team is united, the fans love us and we are getting the results now.”