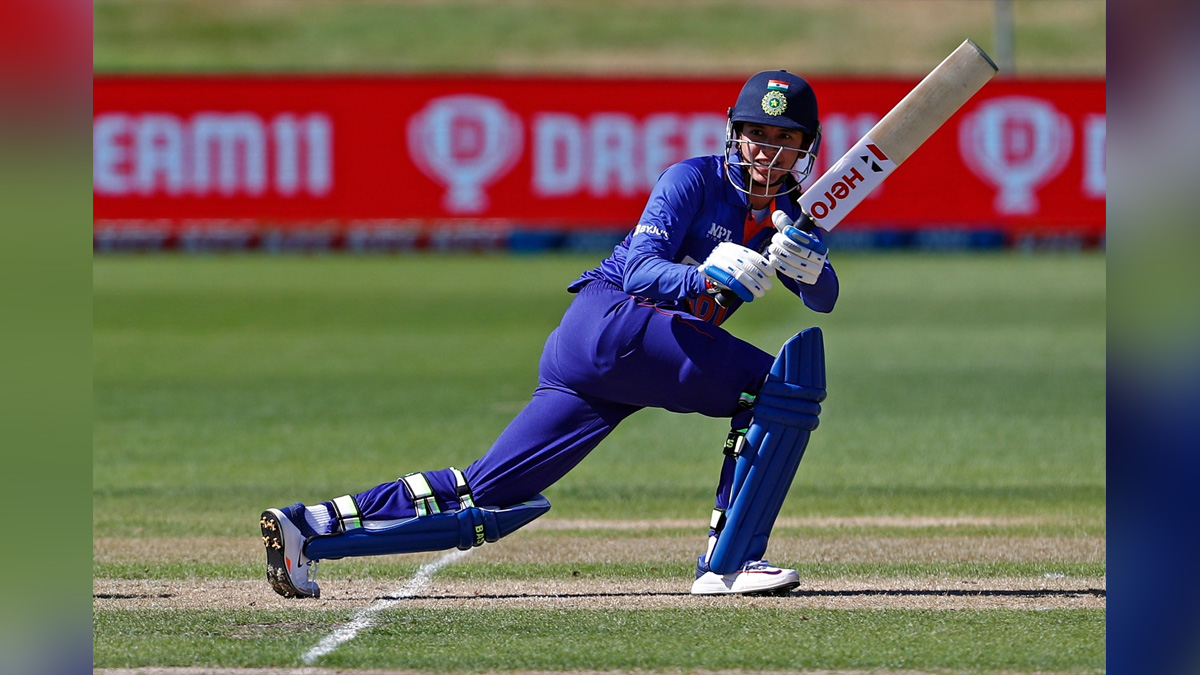 Smriti continued her rich vein of form in international cricket for the second year running, finishing as India’s highest run-scorer across formats. The left-handed opener showed her incredible prowess in the white-ball formats and was the highest run-getter in T20Is (594 runs) and the second-highest in ODIs (696 runs) for India in 2022.

Her most exciting innings of 2022 came in the second T20I of the bilateral series against Australia in December. In front of over 47,000 spectators – the highest turnout for a women’s cricket match in India – at the DY Patil stadium in Mumbai, Smriti smacked a 49-ball 79 while chasing Australia’s 187/1.

She was India’s top-scorer in the match, taking the match to the very end as India set up a Super Over clash after levelling the scores at 187/5. In the Super Over, India made a competitive total of 20/1, out of which Smriti scored 13 off the last three balls.

India then restricted Australia to 16/1, sealing a memorable win in front of a roaring home crowd. Nat was at her dominant best across formats for England in 2022, finishing the year as the top-scorer in Test and second highest in ODIs.

She did the bulk of her scoring in ODI cricket, scoring 833 runs at an average of 59.50 and a strike rate of 91.43 and played a pivotal role in England’s journey to the final of the ODI World Cup 2022, becoming the third-highest run-getter in the tournament with 436 runs in eight matches.

Nat also showed what she is capable of in the longer format, scoring 242 runs in two matches. She scored her maiden Test century with a superb 169 not out against South Africa in June.

She made handy contributions with the ball as well, bagging 22 wickets across all formats in 2022. In the first ODI of the bilateral series against South Africa, she registered career-best figures of 4-59, showing her ability to change the game with the ball.

2022 will be remembered as the year Amelia came into her own as an all-rounder, with the 22-year-old contributing consistently with the bat and the ball across formats. She couldn’t have asked for a better start to the year – the right-hander registered four scores of 50-plus in the five-match ODI series against India, including a sublime century in the second match.

Amelia carried her form over to the World Cup as well, where she was the third-highest run-getter for New Zealand with 201 runs. In the shorter format, she showed a marked improvement in her batting, accumulating 327 runs at an average of 32.70, compared to her career average of 22.66.

With the ball in hand, the leg-spinner was more than a handful for the opponents and bagged 30 wickets across formats. Despite not managing to score a century over the last 12 months, 2022 may have been Beth’s best year of her career yet as she elevated her game to an even higher level on the back of some added consistency and new-found maturity.

She did manage eight scores in excess of 50 in 2022 (four in T20Is, three in ODIs and one at Test level) and six not-outs in 50-over cricket during the year helped the Australia star finish with an ODI average of more than 100 over the last 12 months.

It was against old foe England in the Ashes series on home soil that her year commenced and it was during the Women’s ODI World Cup in New Zealand that the opener really shone. Dismissed just three times during the showcase event, her haul of 330 runs was bettered by only five other players and her average of 110 was the best of any batter at the tournament.

Unsurprisingly Beth did not slow down, with more dominant performances coming during Australia’s successful Commonwealth Games campaign and another two unbeaten half-centuries during the away series in India at the end of the year.