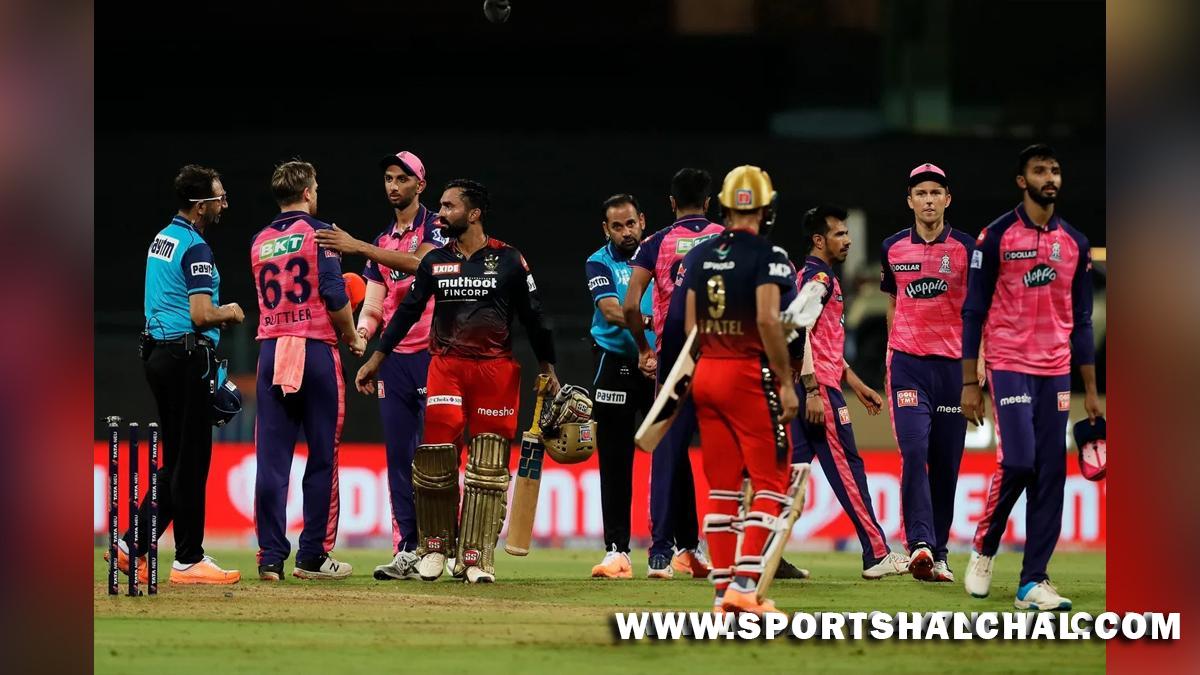 Mumbai : Veteran Dinesh Karthik struck an unbeaten 44 off 23 deliveries and shared a crucial 67-run partnership with Shahbaz Ahmed (45) as Royal Challengers Bangalore beat Rajasthan Royals by four wickets in Match 13 of the IPL 2022 at the Wankhede Stadium, here on Tuesday. RCB was in deep trouble 87/5 in the 13th over when Karthik and Ahmed came into bat. The duo displayed some brilliant cricketing skills to guide their team home. Karthik and Ahmed raised 67 runs off 33 balls to put RCB on course to four points with their second win in three games. They hammered 21 runs off Ravichandran Ashwin with Karthik blasting a six and two fours off his statemate. He gave similar treatment to Navdeep Saini, scoring 16 runs with three boundaries one whipped through mid-wicket, one lap-swept to backward square and the third one flipped over short fine leg. In the very next over, Shahbaz Ahmed squeezed a Prasidh Krishna through short third man and then pulled him over fine leg into the stands for a big six as RCB cruised to victory. Skipper Faf du Plessis and Anuj Rawat gave RCB a good start as they raised 55 runs in quick time.

They struck 16 runs off the third over bowled by Trent Boult, du Plessis despatching him for two fours through covers and another the gap between cover and extra-cover in the while Rawat edged him to third man. Du Plessis struck Ravichandran Ashwin for a couple of boundaries before he was out, caught by Boult off Yuzvendra Chahal, moving to the leg-side to hit him over his head but mistiming it. Rawat too did not last long, caught by Sanju Samson off Navdeep Saini for 26 offering a faint edge behind as he tried to run the length ball outside off. Virat Kohli did not last long, run out by Samson as he tried to rush down the wicket even as his partner tried to stop him. And Chahar compounded their problems when he castled David Willey off the very next delivery, which spun a little and sneaked through the gap between bat and pad. RCB were reduced to 62/4 and it became 87/5 soon when Sherfane Rutherford (5) was caught by Saini off Boult in the 13th over. Earlier, Jos Buttler (70) produced another example of power-hitting as he struck a superb unbeaten half-century to lift Rajasthan Royals to a below-par 169/3 in 20 overs. Buttler, who scored a century against Mumbai Indians in their previous match, blasted four sixes in the last two overs of the innings as he remained unbeaten on 70 runs (42 balls, 6×6).

He stitched two vital partnerships an 83-run unfinished stand with Shimron Hetmyer (42 not out – 31 balls, 4×4, 6×2) for the fourth wicket and a 70-run partnership 0ff 49 deliveries with Devdutt Padikkal (37 – 29 balls, 4×2, 6×2) which helped Rajasthan Royals set up RCB a target of 170 to chase. Buttler found a good ally in Karnataka batter Padikkal as they raised 70 runs for the second wicket to revive the innings. Buttler, who batted a bit slower than he did while hitting a century during his century against Mumbai Indians, got going in the last five overs as Rajasthan Royals added 66 runs in the last five overs. The English batter completed his fifty off 42 deliveries but slammed four of his six hits over the fence in the last two overs sixes off the final two deliveries of Mohammed Siraj’s fourth and final over, which was the 19th over the Royals’ innings and then two more sixes off successive balls off the 20th over bowled by Akash Deep. He enjoyed a life when David Willey dropped him off Akash Deep when at 11. RCB ended up paying a heavy price for that lapse. Hetmyer played a good foil to Buttler as they went on repairing the Royals innings once again, raising some quick runs in the last five overs as Rajasthan reached a modest total.
Brief scores: Rajasthan Royals 169/3 in 20 overs (Jos Buttler 70*, Devdutt Padikkal 37, Shimron Hetmyer 42*; Harshal Patel 1/18, David Willey 1/29) lost to Royal Challengers Bangalore 173/6 in 19.1 overs (Dinesh Karthik 44*, Shahbaz Ahmed b Boult 45, Faf du Plessis 29; Yuzvendra Chahal 2/15, Trent Boult 2/34) by four wickets