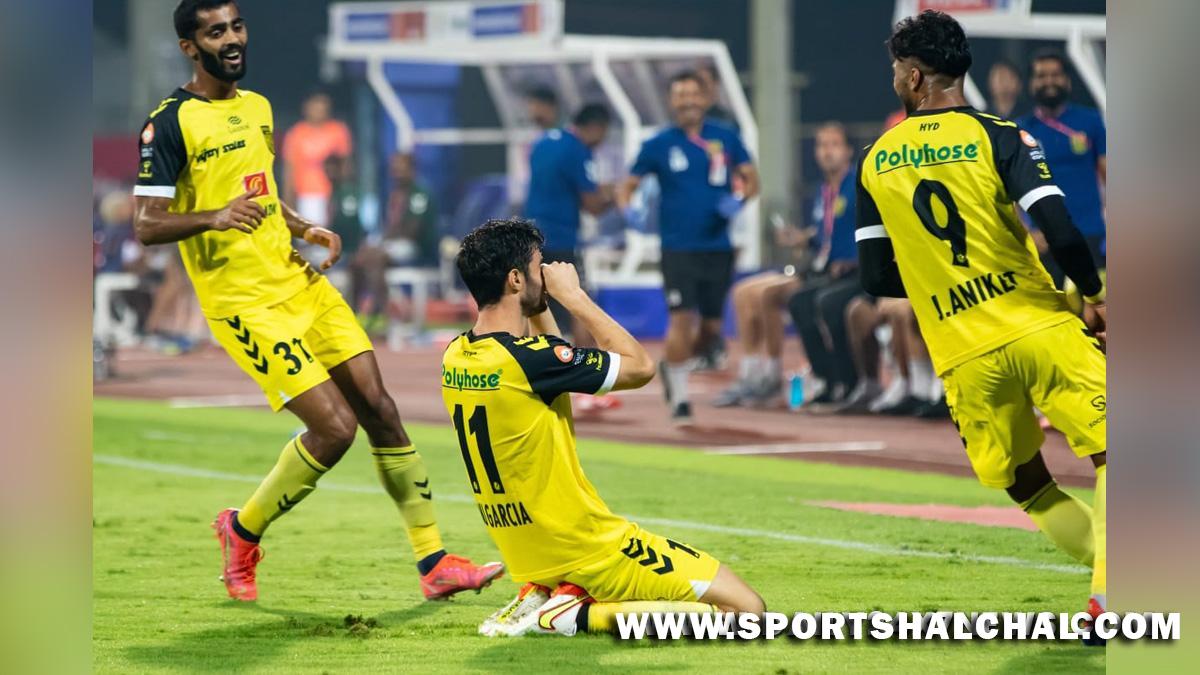 Bambolim (Goa) : Hyderabad FC recorded an emphatic 6-1 win over Odisha FC in the Hero Indian Super League at the Athletic Stadium in Bambolim, Goa on Tuesday.Hyderabad FC striker Bartholomew Ogbeche scored in the 39th and 60th minute. Edu Garcia (54th), Javier Siverio (72nd), and Joao Victor (86 P) too got on the scoresheet for Hyderabad in a mind-blowing second-half display.For Odisha, Juanan scored an own goal in the 16th minute to make it 1-1, but after that, it was one-way traffic till the final whistle.The result means Hyderabad remain second in the points table with 15 points from eight games while Odisha are seventh in the table having 10 points from eight matches. Ogbeche is now the top scorer with eight goals to his name.The game got off to an eventful start as Hyderabad FC went ahead in the ninth minute. Edu Garcia swung in a delightful free-kick at the near post with Joao Victor flicking it on as the ball took a deflection off Hector Rodas and went in.Hyderabad’s joy was short-lived as Odisha equalised. It was almost a repeat of Hyderabad’s opener as Javier Hernandez’s free-kick came off a host of bodies inside the box and squirmed in off Juanan’s chest.

Soon after the goal, Odisha had a golden opportunity to go ahead but Jonathas Cristian fluffed his lines from close after Nandhakumar Sekar had whipped in a delectable cross which went past a diving Chinglensana Singh.Odisha turned on the heat with a couple of gilt-edged chances before Ogbeche made it 2-1 with a thumping header from Edu Garcia’s cross.At halftime, Hyderabad led 2-1 but in the second half, they swept Odisha off their feet with a scintillating performance. Edu Garcia started the onslaught with a buccaneering run, getting the better of a defender and firing home into the right bottom corner.Ogbeche was replaced by Javier Siverio in the 68th minute and the latter found the back of the net minutes after coming on, tucking in a Juanan ball into the net. Siverio won a penalty five minutes to full time after Gaurav Bora brought him down inside the box. Joao Victor stepped up and slotted it past the keeper from the spot.