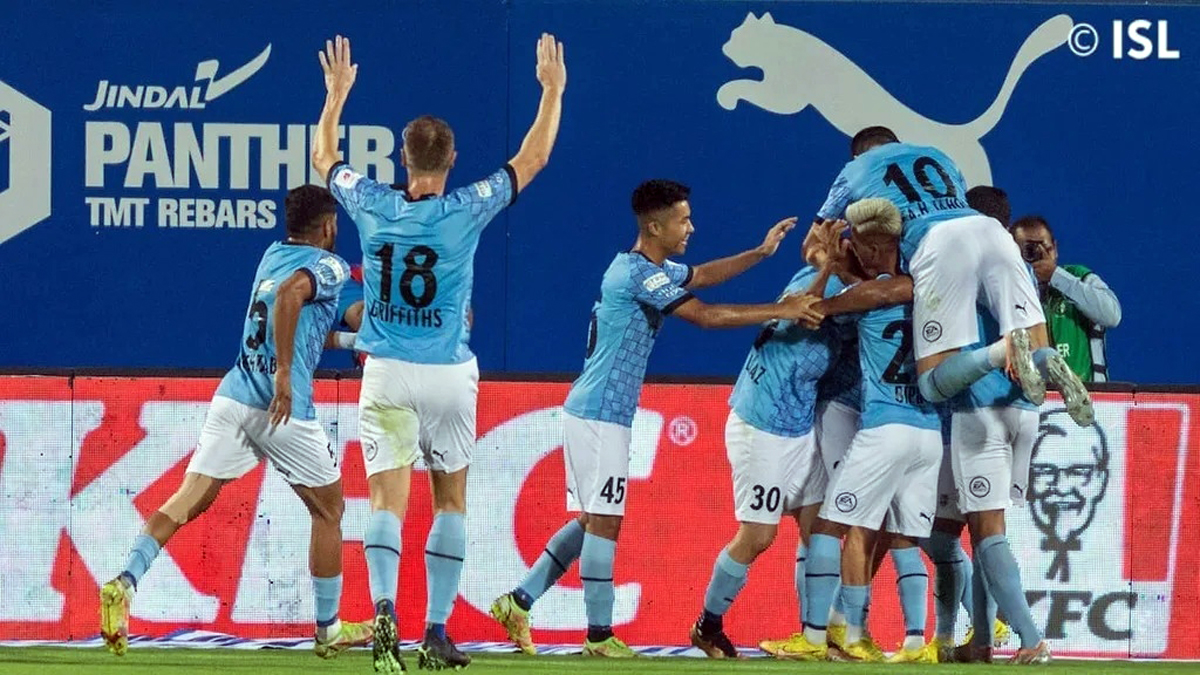 Mumbai : Former champions Mumbai City FC came up with a commanding 4-0 win against Kerala Blasters, registering their eighth win in a row in an already dominant season of the Indian Super League (ISL) at the Mumbai Football Arena on Sunday.

The win brought an end to Kerala Blasters’ eight-match unbeaten run and vaulted Mumbai City FC back to the top of the Hero ISL, as they brought up a league record eight wins in a row.

This was also the first time in their history that Mumbai City FC scored four goals in the first half, all within the first 22 minutes of the match. Pereyra Diaz struck a brace, scoring in the 4th and 22nd minute, while Greg Stewart (10th min) and Bipin Singh (16th min) scored for Mumbai City FC as they came up with asuperb performance.

The result came as a strong statement from Mumbai City FC in the title race, with the Blasters being the most in-form team alongside them this season coming into the match.

The Blasters’ streak, incidentally, happened in between their two games against Mumbai City FC this season, both of which they lost. They stay in third place and will have two weeks to regroup before travelling to Goa on January 22.

Mumbai City FC will travel to Kolkata to play ATK Mohun Bagan on January 14. The visitors tried to keep pace with Mumbai City FC for the opening ten minutes of the game, but still couldn’t keep Mumbai City FC’s relentless frontline at bay.

In the fourth minute, Bipin Singh received a long ball from the back on the wings — which would become a feature throughout the game — and played a one-two with Greg Stewart to break into the box.

His shot was saved by Prabhsukhan Gill, but the deflection fell in the path of Jorge Diaz who swept the ball home for the first of his two goals. Some close tackles ensued in midfield immediately after but just as the Blasters seemed to have lifted themselves, Stewart was on hand to deflate them in the 10th minute.

This time it was Lallianzuala Chhangte who received a long diagonal on the opposite wing, before floating it into the box for Stewart, who got to the ball before Gill nodded it home. Within ten minutes, Mumbai City FC’s imperious front four had all stamped their mark on the game, according to a report on the ISL website.

Before the Blasters could regroup, another long ball split their defence. Mehtab Singh found Diaz’s run in the channels, and the striker held it up in the box before cutting it back for Bipin on the left.

The winger took his time before curling the ball into the top left corner. Diaz then put the fixture to bed in the 22nd minute, running onto a through ball from Ahmed Jahouh and finding the net via a deflection off Victor Mongil.

Kerala Blasters’ commitment to attack meant the fixture seemed to have gotten away from them before they could react. The home team slowed things down from there, keeping 59% of the possession and allowing only one shot on target to the Blasters as they kept a clean sheet.