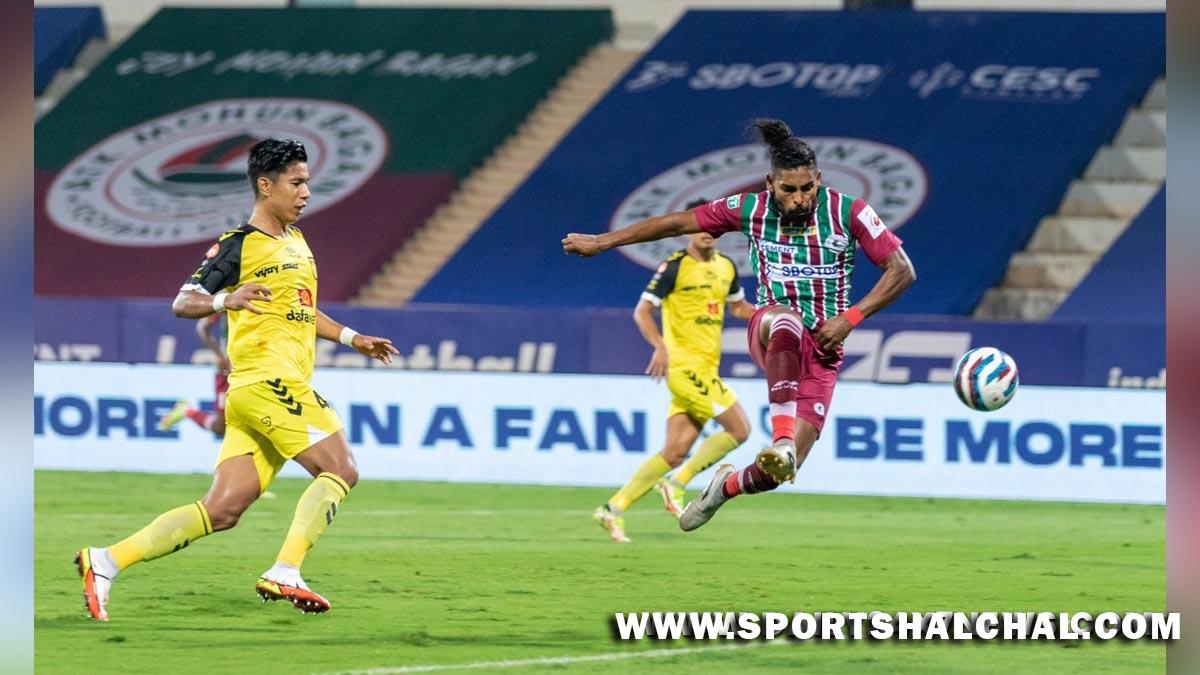 Bambolim (Goa) : Despite their 0-1 loss to ATK Mohun Bagan in the second leg of the Hero Indian Super League semifinal, Hyderabad FC made history by qualifying for the final with a 3-2 victory on aggregate over two legs at the Athletic Stadium, here on Wednesday.Roy Krishna scored in the 79th minute to give ATKMB a glimmer of hope and make for an end-to-end last ten minutes but in the end, it was not enough for the finalists of last season as the men in yellow booked a final date with Kerala Blasters at the PJN Stadium in Fatorda on Sunday. In the first leg, Bartholomew Ogbeche, Yasir Mohammad and Javier Siverio netted for Hyderabad.Hyderabad head coach Manolo Marquez played the same team that won the first leg 3-1 while Juan Ferrando made a few changes to the ATKMB side from the last game with the ever-dependable centre-back Tiri being a forced one as he picked up an injury in the last game. Kiyan Nassiri who scored a memorable hattrick in the Kolkata derby earlier this season got a start.

ATKMB looked the likelier of the two teams to nod ahead in the opening exchanges, the Mariners needing two goals at least to make a comeback.Liston Colaco was proving to be a handful for the Hyderabad defenders as he time and again put Nim Dorjee Tamang to the sword with his jinking runs. Colaco’s industry could have paid dividends soon but the local boy curled his effort just wide of target after dribbling past a few Hyderabad shirts inside the box. Colaco then tried to set up Krishna with a similar run and delivery inside the box but Yasir Mohammad did well to keep the Fijian striker at bay.There was no stopping Colaco as he shimmied past a few defenders post the drinks break and took a swipe at goal only for Laxmikant Kattimani to pull off a stunning save with his outstretched leg. At the other end, Aniket Jadhav spurned a gilt-edged chance to make it 4-1 on aggregate for Hyderabad from a Yasir ball, nodding a free header from five yards, wide. The best chance of the half, though, fell to Hugo Boumous who could not stab home from handshaking distance after a pin-point Prabir Das cross set him up perfectly, the French-Moroccan sliding in to get a touch on the ball as well but only dragging his effort wide.

Just before halftime, Joni Kauko shot wide, to sum up ATKMB’s half of missed opportunities.Hyderabad suffered a blow early on in the second half when Sauvik Chakrabarti had to come off due to an injury, Sahil Tavora replacing the midfielder. ATKMB kept piling on one attack after another as Hyderabad sat back and defended deep. Ferrando took off Sandesh Jhingan and threw in Manvir Singh, going all out in search of goals. There were huge appeals for a penalty when Joni Kauko was brought down by Akash Mishra but replays showed he was tackled just outside the box.The goal came from a likely source for ATKMB as Colaco showed his magic again down the left flank, bursting down that side to cross from the byline at the far post where Krishna was on hand to slam home from close.ATKMB threw in the towel in the last ten minutes but it proved to be too tall an order for them in the end as they succumbed to a semifinal exit.

IPL 2022: Will enjoy opening the innings with Mayank for Punjab Kings : Shikhar Dhawan