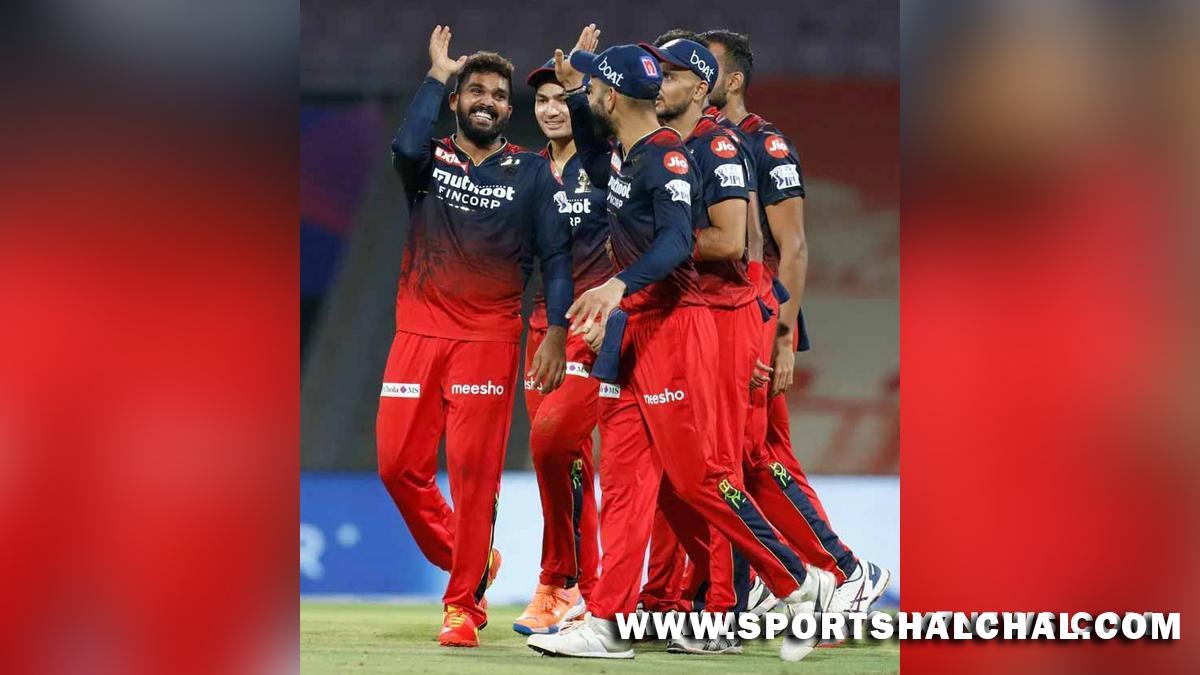 Mumbai : In a see-saw, low-scoring thriller in IPL 2022, where bowlers called the shots, Royal Challengers Bangalore defeated Kolkata Knight Riders by three wickets at DY Patil Stadium on Wednesday.After bowling out Kolkata for just 128, Bangalore lost their first three batters in power-play. But critical knocks from Sherfane Rutherford (28), David Willey (18), Shahbaz Ahmed (27), Dinesh Karthik (14 not out) and Harshal Patel (10 not out) took Bangalore home with four balls remaining.Kolkata drew first blood on just the third ball as Umesh Yadav cramped Anuj Rawat for room, leaving the youngster to poke at it and the edge was snapped by the keeper flying to his left. Virat Kohli hit Yadav for sweetly-timed boundaries through cover point and mid-wicket to get going.Faf du Plessis slammed Tim Southee over cover. But on the very next ball, du Plessis closed the bat face too early and the leading edge flew to point. Kolkata’s roaring start continued as Kohli flirted with a ball outside the off-stump off Yadav and nicked behind to keeper.Rutherford and Willey revived Bangalore’s chase after the early strikes. The duo absorbed the pressure and got boundaries when the ball was there to be hit. The 45-run partnership off 53 balls ended when Willey chipped straight to mid-wicket off Narine.

Rutherford got a boundary off Chakravarthy while Ahmed smacked Andre Russell with sixes over deep mid-wicket and deep square leg. Ahmed danced down the pitch to hit Chakravarthy over deep mid-wicket. But on the very next ball, Chakravarthy had the last laugh as Ahmed was beaten by flight and turn to be stumped by the keeper.Rutherford’s innings ended when Sheldon Jackson grabbed the inside edge by diving to his right and grabbing it with his right hand off Southee’s bowling. Wanindu Hasaranga hit a boundary but miscued loft on the next ball to mid-off.Patel scooped a boundary off Venkatesh Iyer and whipped past long-on while Karthik, who survived a run-out chance, pulled Russell over deep square leg and finished off the chase with a gorgeous straight drive to open Bangalore’s account in the points table.Earlier, Kolkata’s batting order were the masters of their own downfall. In a quest to hit hard against anything coming their way, they fell while attempting to play extravagant strokes instead of adjusting to the match situation.Bangalore’s seamers found the perfect length on a tacky pitch: just short of a good length with extra bounce coming to the fore. Kolkata lost openers Venkatesh Iyer and Ajinkya Rahane in power-play. While Iyer tried to nudge a short of length delivery from Akash Deep to the leg-side, only for the top-edge to be pouched by the bowler running to his left, Rahane mistimed the pull on a short ball from Mohammed Siraj straight to deep square leg.

Deep’s pacy short ball, with some away nip, claimed Nitish Rana as a miscued heave over leg-side was snapped by Willey running back from backward square leg and making a slide to complete the catch in the final over of power-play. Kolkata’s troubles increased as Shreyas Iyer holed out to long-on off Hasaranga. Sunil Narine produced some fireworks by smacking Deep for a four over mid-off and six over keeper’s head.But an ugly hook to a straight ball saw Narine miscue to backward point off Hasaranga in the ninth over. On the very next ball, Hasaranga castled Sheldon Jackson with a beautiful googly. Russell, though, had other plans. He began by slog-sweeping Hasaranga over deep mid-wicket.Patel struck on the fourth ball of his night, forcing Sam Billings to hit his slower short of length ball straight to long-on. Russell then punished Ahmed with sixes over deep mid-wicket and long-off.But Patel frustrated Russell with four dot balls and on the fifth ball, the pacer had his man as the big-hitting right-hander tried to hit a short ball outside off-stump through off-side, but got an edge behind to Karthik.Hasaranga scalped his fourth wicket as Southee holed out to long-on. Yadav and Chakravarthy got a couple of boundaries to take Kolkata past 120. Yadav smacked Deep for a six and four before the pacer ended the 27-run stand by uprooting his leg-stump with a yorker.
Brief Scores: Kolkata Knight Riders 128 all out in 18.5 overs (Andre Russell 25, Umesh Yadav 18; Wanindu Hasaranga 4/20, Akash Deep 3/45) lost to Royal Challengers Bangalore 132/7 in 19.2 overs (Sherfane Rutherford 28, Shahbaz Ahmed 27; Tim Southee 3/20, Umesh Yadav 2/16) by three wickets