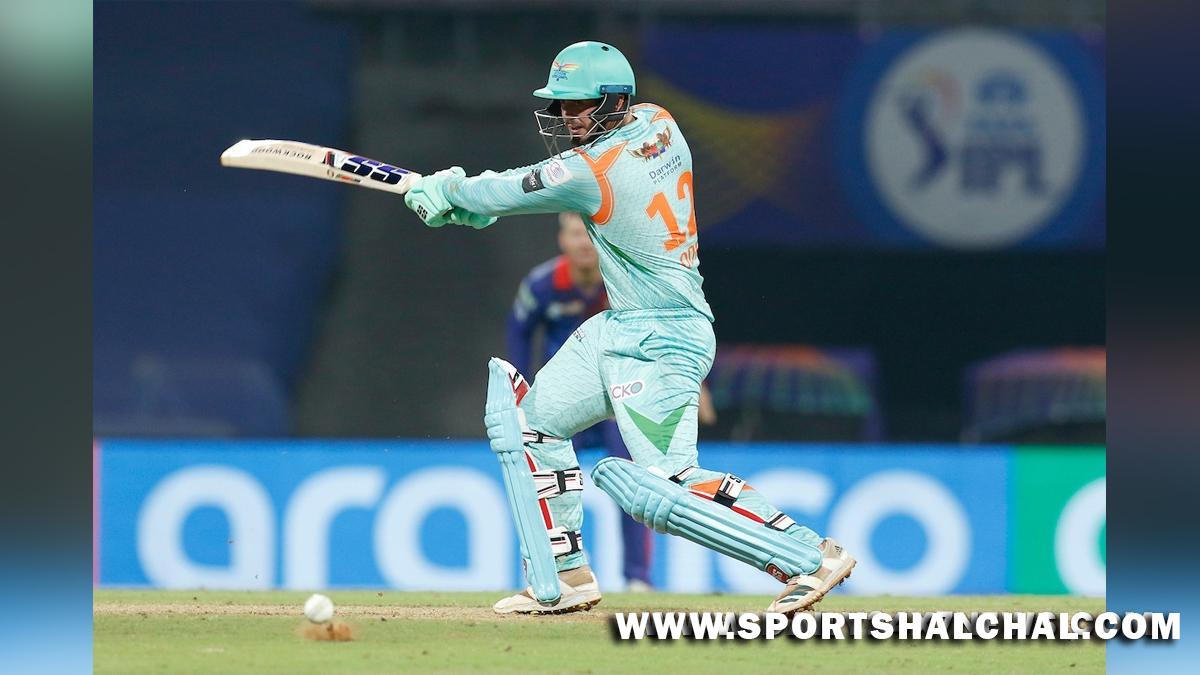 Mumbai : A disciplined bowling performance followed by a solid knock by Quinton de Kock (80 off 52) led Lucknow Super Giants to a six-wicket win over Delhi Capitals in an IPL 2022 match at the D Y Patil Stadium, here on Thursday. After winning the toss and opting to bowl first, Lucknow Super Giants produced a disciplined bowling performance to restrict Delhi Capitals to 149/3 in 20 overs despite an attacking fifty by Prithvi Shaw (61 off 34). LSG chased the target successfully despite a few hiccups towards the end. reaching 155/4 in 19.4 overs to secure their third win in four matches. Chasing a modest total, K.L Rahul and Quinton de Kock made a cautious start for Lucknow and were 26/0 in four overs. But the introduction of Anrich Nortje shifted momentum towards LSG. Nortje, who was playing a competitive game after a long time due to an injury, was far from his best and his Proteas teammate De Kock smashed the pacer for 19 runs in his over. The left-hander batter along with Rahul took LSG to 48-0 in the powerplay. After the end of the first six overs, Delhi Capitals skipper Pant deployed spin from both ends but LSG were still in cruise control of this game. Eventually, it was Kuldeep Yadav, who drew first blood for Delhi by dismissing Rahul for 24. Evin Lewis then joined de Kock at the crease and they kept the scoreboard ticking.

Though Lewis struggled to bat freely, De Kock didn’t let the asking rate increase by scoring his fifty off 36 balls and reducing the equation to 66 off 50 balls. LSG were going strong but Lalit Yadav brought Delhi back into the game after he got rid of Evin Lewis for five runs. Wickets were falling from the other end, De Kock continued on his strong outing and steered the side in the run-chase with a 36-run stand for the third wicket with Deepak Hooda (11). Lucknow were on top but there was some drama when Nortje was taken off the attack in the 16th over after bowling his second delivery above waist height. After some deliberation and discussion, Pant went to Kuldeep who was immediately dispatched for two boundaries by Quinton de Kock. But, Kuldeep had the last laugh when he had de Kock caught by Sarfaraz Khan at short third man with LSG needing 28 off 25 balls. Delhi bowlers Mustafizur and Shardul Thakur then gave away just nine runs in the next two overs and brought the equation to 19 runs off 12 balls. The game was truly in balance. But Krunal Pandya hit Mustafizur for a huge six in the 19th over to bring LSG closer to the DC target.

LSG lost the wicket of Hooda in the first ball of the last over but Pandya (19 not out off 14) and Ayush Badoni (10 not out off 3) held their nerves, remained unbeaten and took Lucknow over the victory line, with two balls to spare and six wickets in hand. Earlier, invited to bat first, the new opening pair of Prithvi Shaw and David Warner gave Lucknow a flying start and took them to 52-0 in the powerplay. Out of the 52, Shaw alone scored 47 runs while Warner was a mere spectator at the other end. The attacking batter continued his assault even after the powerplay and raced to his fifty in just 30 balls. However, Lucknow made a roaring comeback in the game by picking quick wickets. It was Krishnappa Gowtham, who gave LSG their first wicket by dismissing the dangerous Shaw. After getting hit for a six and four in the first two balls of his over, Gowtham changed the angle and went around the wicket. The spinner fired the ball wide and got Shaw (61) caught behind.

In the very next over, Ravi Bishnoi got rid of Warner, who managed just four runs off 12 balls in his first IPL 2022 outing. Skipper Rishabh Pant then joined Rovman Powell at the crease and they played cautiously against LSG spinners. Powell (3), in particular, was finding it difficult to middle the ball and his struggle was ended by Bishnoi through a googly, leaving Delhi struggling at 74-3 after 10.3 overs. From there on, Sarfaraz Khan, who was playing in his first match for DC, and Pant looked to rebuild their team’s innings. But it wasn’t easy as LSG spinners bowled excellent line and length and runs were drying up for DC. But, after spending a decent amount of time in the middle, Pant decided to shift gears and smashed Andrew Tye for two sixes and a four, helping Delhi cross the 100-run mark in the 16th over. His partner Sarfaraz joined the party and hit 13 runs off Avesh Khan to bring Delhi back on track in the game. However, Lucknow pacers Avesh and Jason Holder used their variations perfectly and gave away just 19 runs in the last three overs. Both Pant (39 not out off 36) and Sarfaraz (36 not out off 28) tried everything but they couldn’t time the ball properly and Delhi eventually finished with 149/3 in 20 overs. Ravi Bishnoi (2/22) was the most successful bowler for Lucknow while Krishnappa Gowtham (1/23) also picked one wicket.
Brief scores: Delhi Capitals 149-3 in 20 overs (Prithvi Shaw 61, Rishabh Pant 39 not out; Ravi Bishnoi 2/22) lost to Lucknow Super Giants 155-4 in 19.4 overs (Quinton de Kock 80, K.L Rahul 24; Kuldeep Yadav (2/31) by 6 wickets.