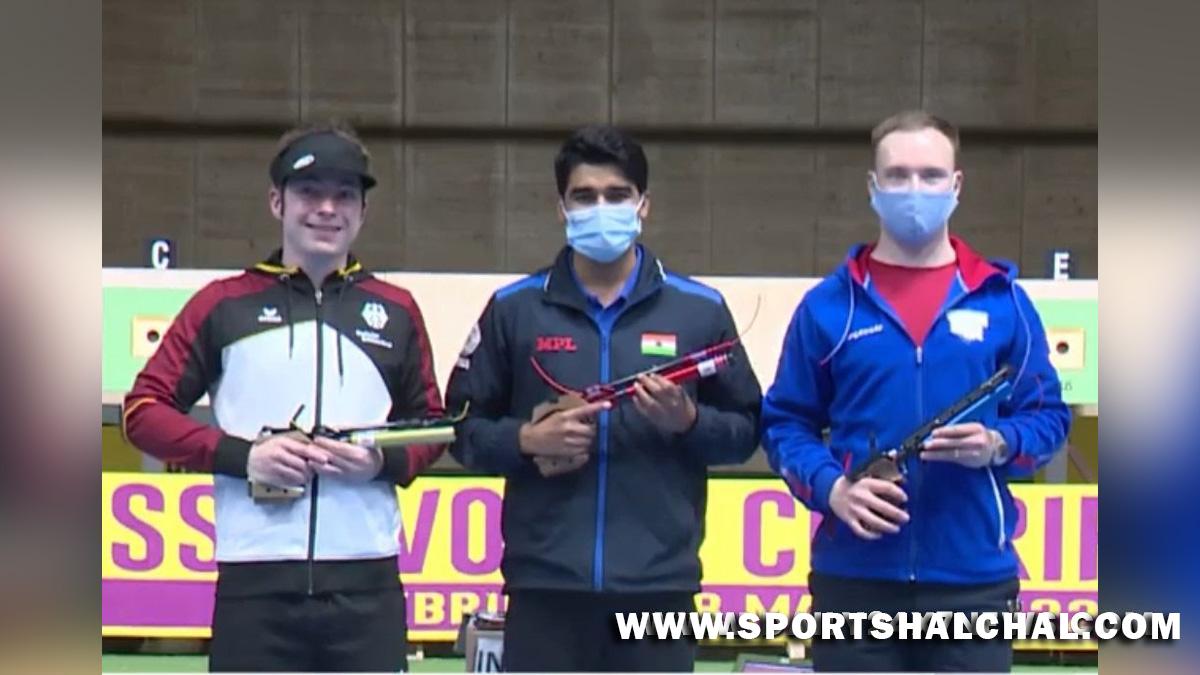 New Delhi : India’s Saurabh Chaudhary struck his third individual International Shooting Sport Federation (ISSF) World Cup stage gold, his first in the new format, dominating Germany’s Michael Schwald to win 16-6, in the final of the Men’s 10M Air Pistol competition.Shooting on competition day three of the year’s first ISSF World Cup Rifle/Pistol in Cairo, Egypt, Saurabh’s feat gave India their first medal of the tournament. Tokyo Olympic silver medallist Artem Chernousov of Russia won bronze.
Early on Tuesday, Saurabh had made it through to the first semi-final of the competition, finishing third in the 60-round qualification round with a score of 584. Chernousov topped the 92-strong field with a sublime 591.In the first semi-final where the first of four athletes are eliminated after 10-shots and the second after 15, Saurabh made it to the medal round along with Chernousov yet again for company as both notched up 38 points to eliminate Robin Walter of Germany first and then Emis Vasermanis of Latvia.

In this round, the shooter with the highest single-shot score is awarded four points, while the others get three, two and one each respectively, as they move down the hierarchy. Points are split in case of a tie. This format continues till the medal round.Schwald and Azerbaijan’s Ruslan Lunev were the other two shooters to make it to the medal round from the second semi-final.In the medal round where the bronze medal winner is determined and the top two make it through to the gold medal match, Saurabh topped the four-man field yet again after 15-shots with a score of 42.5 points. Schwald joined him with 41.5 points while Chernousov had to be satisfied with bronze, finishing with 40. Lunev finished fourth, bowing out after 10-shots with a score of 21.In the final, the winner of a single-shot is awarded two points and the first to 16-points wins. In case of a tie, each shooter gets a point. Saurabh needed just 11 single-shots, including shots of 10.5, 10.8 and 10.6 in the last three of his four shots to seal the deal.The day also has the Women’s 10M Air Pistol finals scheduled for later. France, Italy and India currently top the medal tally with one gold each.Over 500 athletes from 60 nations have entered to take part in the Cairo World Cup which has 20 medal sets on offer.