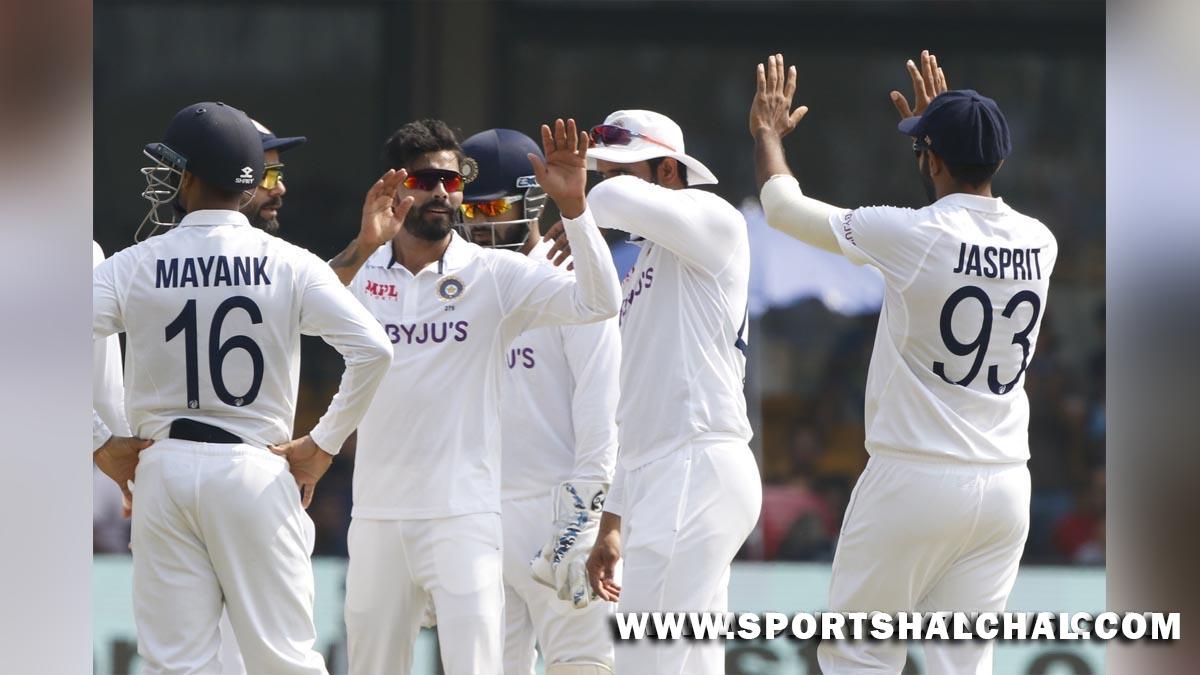 Bengaluru : Dimuth Karunaratne scored his 14th Test century on a difficult pitch but it was not enough to deny India a win by 238 runs on Day three of the second Test at M Chinnaswamy Stadium here on Monday.With the huge win inside the first two sessions on Day three, the hosts have completed a 2-0 series sweep and pocketed 12 points as part of World Test Championship (WTC) tally.Karunaratne put up a defiant show against a relentless India bowling attack as Sri Lanka began day three on a positive note. The visitors showed some fight in the start of day’s play as Karunaratne used his feet straightaway to take two boundaries off Ravindra Jadeja through the off-side. Runs began to flow for the visitors’ as Kusal Mendis glanced and lofted Ravichandran Ashwin for boundaries.Sri Lanka’s aggressive and positive play continued as Mendis swept Jadeja through deep square leg while Karunaratne was lucky in surviving an inner edge off Ashwin. The positivity and decisive attitude in play resulted in Mendis reaching his 12th Test half-century off 57 balls.The 97-run partnership, highest for Sri Lanka in this series, was broken by Ashwin as Mendis was foxed by drift and dip from round the wicket angle. Mendis danced down the pitch to counter the delivery but the ball went past the outer edge and was stumped from behind by Rishabh Pant.One brought two for India as Jadeja bowled a quicker delivery to hit Angelo Mathews stumps through the gate.

Ashwin then claimed his second wicket of the session as Dhananjaya de Silva was caught at forward short leg, enabling the off-spinner to go past Dale Steyn in the list of leading wicket-takers in Test cricket.Amidst the wheels coming off Sri Lanka’s resistance, Karunaratne stood tall and brought up his fifty in 92 balls.He then welcomed Mohammed Shami with a four whipped through mid-wicket and danced down the pitch to flick Axar Patel through the same region. Supporting him was Niroshan Dickwella, who has managed to hold fort against a relentless India bowling attack.Karunaratne began the post-lunch session by using the pace of Patel to lap over leg slip. But Patel bounced back to get Dickwella stumped as the left-hander came down the pitch for a swing across the line but the ball went past outside edge and Pant behind did the rest. Patel took his second wicket of the day as Charith Asalanka flicked straight to leg slip.After a reverse sweep off Patel took him into the 90s, Karunaratne then played a conventional sweep over square leg for four. He then raised his century by flicking through backward square leg off Jasprit Bumrah, becoming only the third Sri Lanka captain to score a Test hundred in India. Karunaratne followed it up by using Bumrah’s pace to steer a short ball over the slip cordon.Karunaratne’s resistance ended at 107 as Bumrah got one to come back in and went through his gate to crash into the stumps. In the next over, Ashwin beat Lasith Embuldeniya on the inside edge to trap him lbw in front of stumps.Bumrah then clean bowled Suranga Lakmal and Vishwa Fernando holed out to mid-off off Ashwin to end Sri Lanka’s innings at 210, their highest total in the two-match series.
Brief scores: India 252 and 303/9 d in 68.5 overs (Shreyas Iyer 67; Praveen Jayawickrama 4/78) beat Sri Lanka 109 and 208 all out in 59.3 overs (Dimuth Karunaratne 107; Kusal Mendis 54; Ravichandran Ashwin 4/55, Jasprit Bumrah 3/23) by 238 runs.