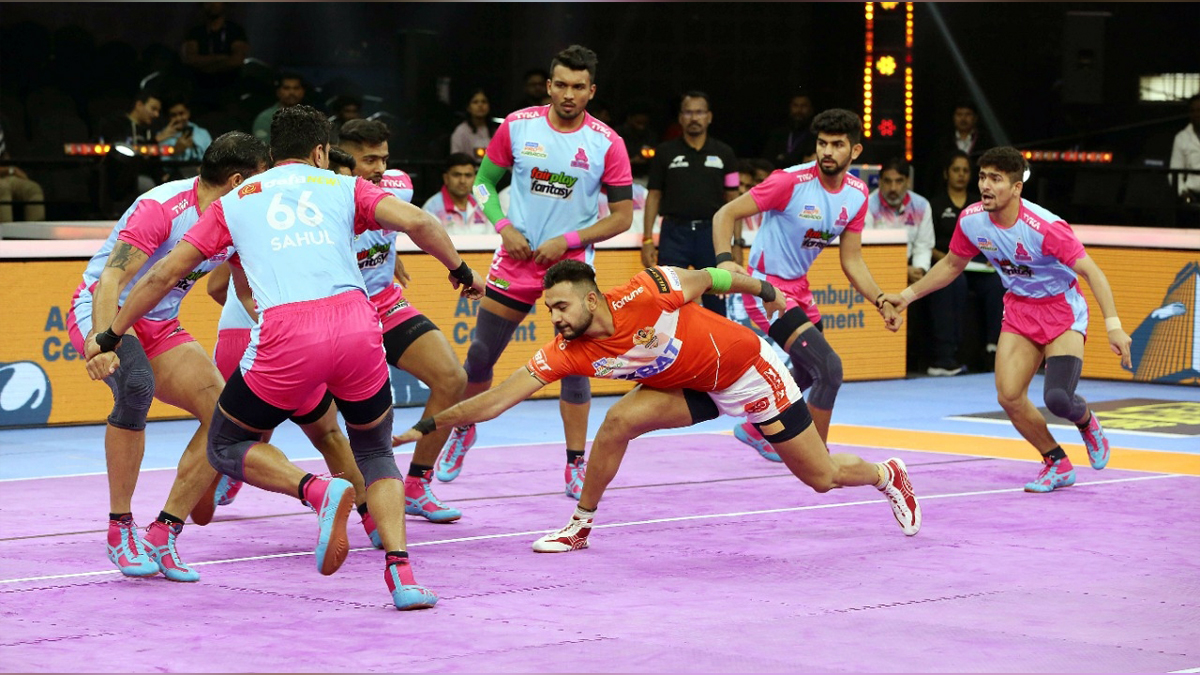 Hyderabad : The Jaipur Pink Panthers held a healthy lead going into the last minute of the match, but raiders Sonu and Dong Geon Lee put up an inspiring performance and helped the Gujarat Giants tie the game 51-51 in their Pro Kabaddi League (PKL) Season 9 match here on Friday.

Sonu scored 14 points, while captain Lee contributed 10 points at the Gachibowli Indoor Stadium here. Parteek Dahiya pulled off a Super Raid as the Gujarat Giants took the lead at 6-3 in the fourth minute. The all-rounder continued to effect raids and reduced the Panthers to just two members on the mat.

Moments later, the Giants inflicted an All Out and took a massive lead at 13-7 in the 7th minute. But the Jaipur side tackled Dong Geon Lee and stayed in the game at 11-13. Abhishek K.S. and Deepak Singh picked up tackle points, but the Giants still held the lead at 17-15.

Parteek Dahiya pulled off a magnificent multi-point raid catching out Deepak Singh and Abhishek KS and helping the Gujarat side extend its lead further. However, Rahul Chaudhari effected a couple of raids and helped the Panthers reach within touching distance of the Giants’ score at 20-21.

Thereafter, the Jaipur side tackled Mahendra Rajput and levelled the scores at 21-21 at the stroke of half-time. The Panthers pulled off an All-Out in the 24th minute and inched ahead at 29-26. Thereafter, Arjun Deshwal picked up a few raid points as the Jaipur side continued to keep their noses in front at 37-32.

The Panthers pulled off another All-Out in the 32nd minute and took a stronghold of the match at 43-33. Deshwal effected a multi-point raid soon after as the Panthers continued to forge ahead. Sonu effected a few raids for the Giants, but the Jaipur side still held the lead at 49-44 in the 39th minute.

However, Sonu continued to shine as the Gujarat side inflicted an All-Out soon after. Moments later, Lee effected a magnificent raid in the dying seconds of the match and helped his team tie the game in the end.