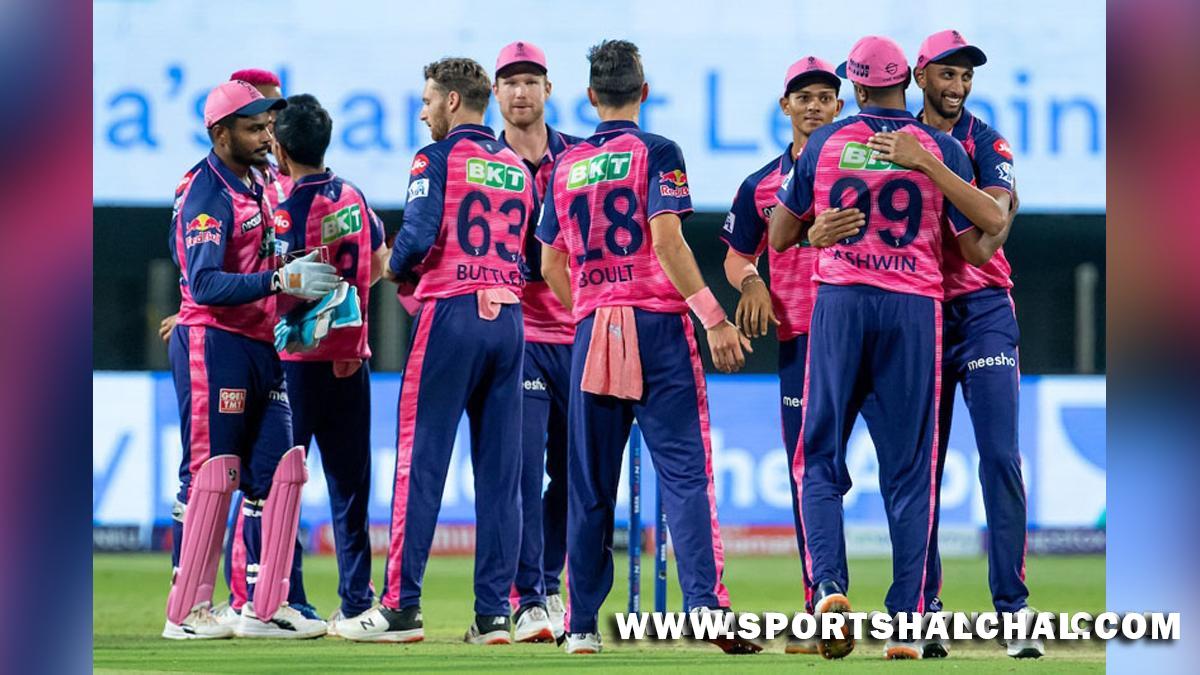 Pune : Dominating knocks by skipper Sanju Samson, Devdutt Padikkal and Shimron Hetmyer, followed by clinical bowling by Yuzvendra Chahal (3/22), Prasidh Krishna (2/16) led Rajasthan Royals to a thumping 61-run victory against Sunrisers Hyderabad in an IPL 2022 match, here on Tuesday. Riding on brilliant attacking knocks by skipper Sanju Samson (55 off 27), Devdutt Padikkal (41 off 29) and a late cameo by Shimron Hetmyer (32 off 13), Rajasthan Royals posted 210/6 in 20 overs. Apart from the trio of Samson, Padikkal and Hetmyer, Jos Buttler (35 off 28) and Yashasvi Jaiswal (20 off 16) also made valuable contributions with the bat. Chasing a huge total, SRH got off to the worst possible start as Prasidh Krishna rattled the top-order. In his very first over, the pacer dismissed Kane Williamson for 2 as Devdutt Padikkal at first slip took a great catch. Prasidh continued to bowl back-of-a-length deliveries and in the corridor of uncertainty and was soon rewarded with the wicket of Rahul Tripathi as he edged it to Samson. Nicholas Pooran, who struggled against the moving ball, then was trapped in front by Trent Boult as SRH slid to 9 for 3. From that precarious position, there was little hope left for SRH to chart a comeback. The wickets of Abhishek Sharma (9) and Abdul Samad (4) also didn’t help Hyderabad’s chase.

Lower down the order, Aiden Markram (57 off 41) and Romario Shepherd (24 off 18) made useful contributions while Washington Sundar (40 off 14) went on a hitting spree in the last two overs against Boult and Riyan Parag. But, it wasn’t enough as Hyderabad were restricted to 149-7 in 20 overs. Yuzvendra Chahal (3/22), Prasidh Krishna (2/16) and Trent Boult (2/23) were the wicket-takers for Rajasthan. Earlier, invited to bat first, openers Jos Buttler and Yashasvi Jaiswal gave Rajasthan a flying start. Both Buttler and Jaiswal played cautiously against Bhuvneshwar Kumar but the England cricketer targeted Umran Malik and hit him for a couple of boundaries and sixes, taking 21 runs off his over. Washington Sundar, who came to bowl the next over, also conceded 18 runs as both Buttler and Jaiswal hit a six each, taking Rajasthan over the 50-run mark in the 5th over. Rajasthan were also helped by some poor bowling by the SRH bowlers, who sent down four no-balls in the first five overs. T Natarajan came to bowl the final powerplay over and gave only eight runs as Rajasthan scored 58 runs in the first six overs. However, the very first ball after the powerplay brought a wicket for Hyderabad as Jaiswal was dismissed by Romario Shepherd for 20. SRH skipper Kane Williamson introduced left-arm spinner, Abhishek Sharma, into the attack but he couldn’t make much of an impact and instead gave 15 runs in his over. It was Umran Malik, who gave Hyderabad their next breakthrough by getting rid of the dangerous Buttler on 35.

Thereafter, skipper Sanju Samson and Devdutt Padikkal kept the scoreboard ticking for Rajasthan. Washington Sundar, who had an expensive first over, continued to suffer as Samson whacked the spinner for a six and a four and helped Rajasthan cross the 100-run mark in the 11 over. On the other hand, Padikkal joined the action and hit T Natarajan for six and a four. Both Padikkal and Samson were having a great time in the middle and dealing with boundaries. Their quick 73 runs stand for the third wicket was finally broken when Padikkal was cleaned up by Malik on 41, leaving Royals at 148-3 after 15 overs. The wicket didn’t affect Samson that much as he continued his aggressive batting and brought his fifty in just 25 deliveries. However, the Rajasthan skipper couldn’t continue his innings longer after that and was dismissed by Bhuvneshwar for 55. Despite losing the two key wickets of Padikkal and Samson, the run rate didn’t drop for the Royals as new batters — Shimron Hetmyer and Riyan Parag combined to trouble SRH bowlers. Hetmyer especially was the more aggressive between the two and he hit Bhuvneshwar for 15 runs and helped Rajasthan breach the 200-run mark in the 19th over itself. On the other hand, Parag also gave him the much-needed support from the other end. Hetmyer, who played a late cameo of 32 in just 13 deliveries, was cleaned up by Natarajan in the last over but he had already done the damage. In the end, Parag (12 off 9) and Nathan Coulter-Nile (1) remained not out as Rajasthan Royals posted 210/6 in 20 overs. Umran Malik (2/39) and T Natarajan (2/43) were the top wicket-takers for Hyderabad.
Brief scores: Rajasthan Royals 210/6 in 20 overs (Sanju Samson 55, Devdutt Padikkal 41; Umran Malik 2/39) beat Sunrisers Hyderabad 149/7 in 20 overs(Aiden Markram 57, Washington Sundar 40; Yuzvendra Chahal 3/22) by 61 runs.