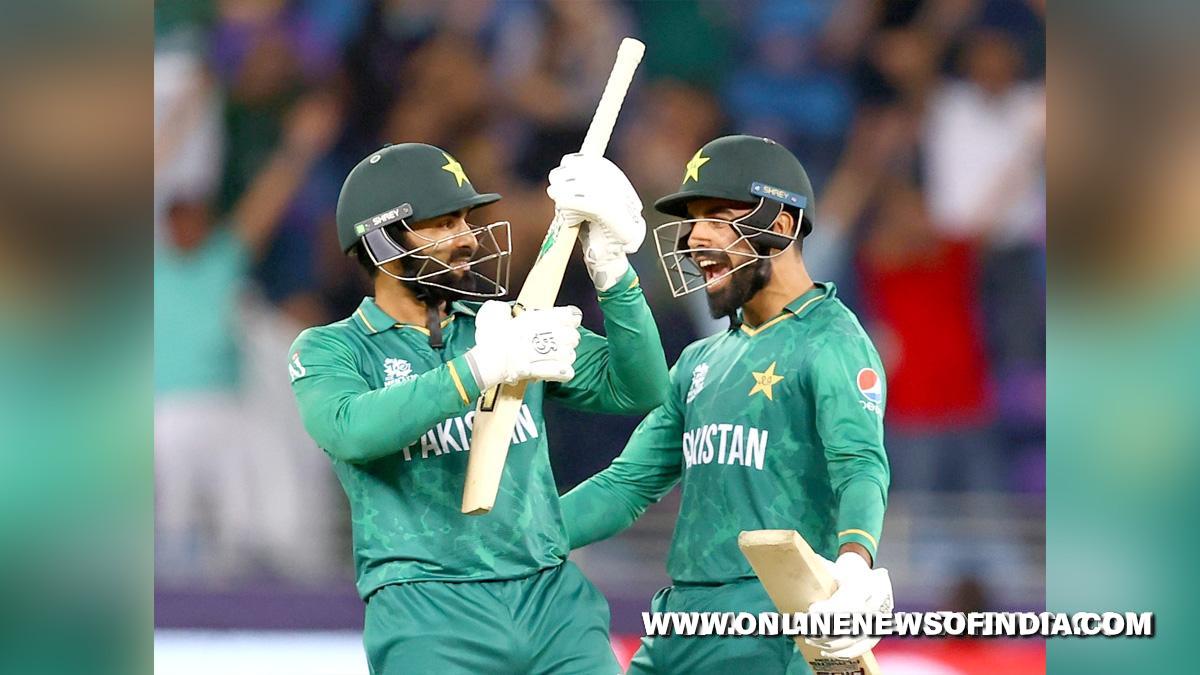 Dubai : Captain Babar Azam’s fighting fifty (51 off 47) and Asif Ali’s cameo (25 off 7) powered Pakistan to a convincing five-wicket win over Afghanistan in a super 12 match of the ICC Men’s T20 World Cup 2021 at the Dubai International Cricket Stadium, here on Friday.With this, Pakistan completed a hat-trick of wins in the ongoing T20 World Cup and they are at the top of the points table in Group 2.Riding on fighting knocks by Mohammad Nabi (35 off 32) and Gulbadin Naib (35 off 25), Afghanistan posted a total of 147/6 in 20 overs. Apart from Nabi and Naib, Najibullah Zadran (22) and Karim Janat (15) also made important contributions with the bat for Afghanistan.Chasing the challenging target for victory, Pakistan in the 3rd over lost the wickets of Mohammad Rizwan, who failed to clear the ropes, holing out to Naveen-ul-Haq at deep square.Walking in at No. 3, Fakhar Zaman (30) released the pressure inside the powerplay. He launched into Nabi after playing out just four balls, smashing the skipper for a four and a six against the spin. The left-hander also punished Naveen for bowling on his pads, swiping it past short fine for a four as Pakistan finished the powerplay on 38/1.

Babar, at the other end, did not look his best by his own lofty standards, bringing up his first boundary only in the ninth over, but did manage to hit a couple more to the ropes thereafter. The pair brought up their 50-run partnership as Pakistan went into the drinks breaks needing 76 from the last 10 overs.It took Afghanistan 10 overs to bring Rashid Khan on and he immediately had the batters in all sorts of trouble, inducing five false shots in his opening over, including an LBW decision that was eventually overturned by DRS in Pakistan’s favour. Afghanistan finally broke the partnership between Fakhar and Babar, with Nabi trapping the former in front of the stumps.Rashid finally struck in his third over to remove Mohammad Hafeez and wheeled away in celebration of his 100th T20I wicket. The wrist-spinner reached the milestone in just his 53rd game, thus becoming the fastest player to get to the mark in Men’s T20Is. In his final over, Rashid proved to be expensive with Shoaib Malik sending a half-tracker over the ropes. However, it ended well for Afghanistan despite a dropped chance, as Rashid cleaned up Babar, who had just brought up his half-century, with a wonderful googly.

Naveen-ul-Haq made up for the dropped catch by bowling a brilliant 18th over, giving away just two runs, and also snaring the wicket of the experienced Malik. Needing 24 off the last two overs, it was once again Ali who came to Pakistan’s rescue at the end, smashing four sixes to seal the win for Pakistan in 19 overs with five wickets in hand.Earlier, batting first, Afghanistan produced one of the most entertaining powerplays of the tournament so far. While they scored 49 in the first 6 overs, Pakistan managed to bag four wickets.Hazratullah Zazai (0) was the first one to get dismissed in the 2nd over of the innings as he charged Imad Wasim but only managed to top edge to Haris Rauf, who took a good tumbling catch. Mohammad Shahzad (8) hit Afghanistan’s first boundary but he fell trying to take Shaheen Shah Afridi on again.Thereafter, Asghar Afghan (10) and Rahmanullah Gurbaz (10) provided some respite, taking 17 runs off Imad’s second over, including two sixes and a four. However, both batters fell within five balls, with Haris Rauf and Hasan Ali getting wickets respectively.Najibullah Zadran (22) and Karim Janat (15) steadied the ship with a 25-run partnership that went at just over a run-a-ball. Despite a couple of quiet overs, they made up their run rate by striking two fours off Hassan Ali and Shadab Khan.

Just when it looked like Afghanistan had a launching pad in the middle overs, Janat got out to Wasim as Afghanistan lost half their side inside the first ten overs.Zadran, who looked in fine touch, was then dismissed by Shadab Khan, leaving Afghanistan in deep trouble at 76 for 6 in 13 overs. From there, Mohammad Nabi and Gulbadin Naib took the responsibility and guided their side to 101/6 after the 16th over.Both Nabi and Gulbadin Naib then targeted Hasan Ali in the 18th over and scored 21 runs off this over. They hit a few more bounadries and took 15 runs in the 19th over bowled by Rauf. Overall, both Gulbadin and Nabi did some insane hitting in the death overs, had an unbroken 71-run partnership, and guided Afghanistan to a respectable total of 147 for 6 in 20 overs.Imad Wasim was Pakistan’s standout bowler with two wickets for 25 runs while Shaheen Afridi, Haris Rauf, Hasan Ali, and Shadab Khan bagged a wicket each.
Brief scores:
Afghanistan 147 for 6 in 20 overs (Gulbadin 35, Mohammad Nabi 35; Imad Wasim 2/25) lost to Pakistan 148-5 in 19 overs (Babar Azam 51, Fakhar Zaman 30; Rashid Khan 2/26).