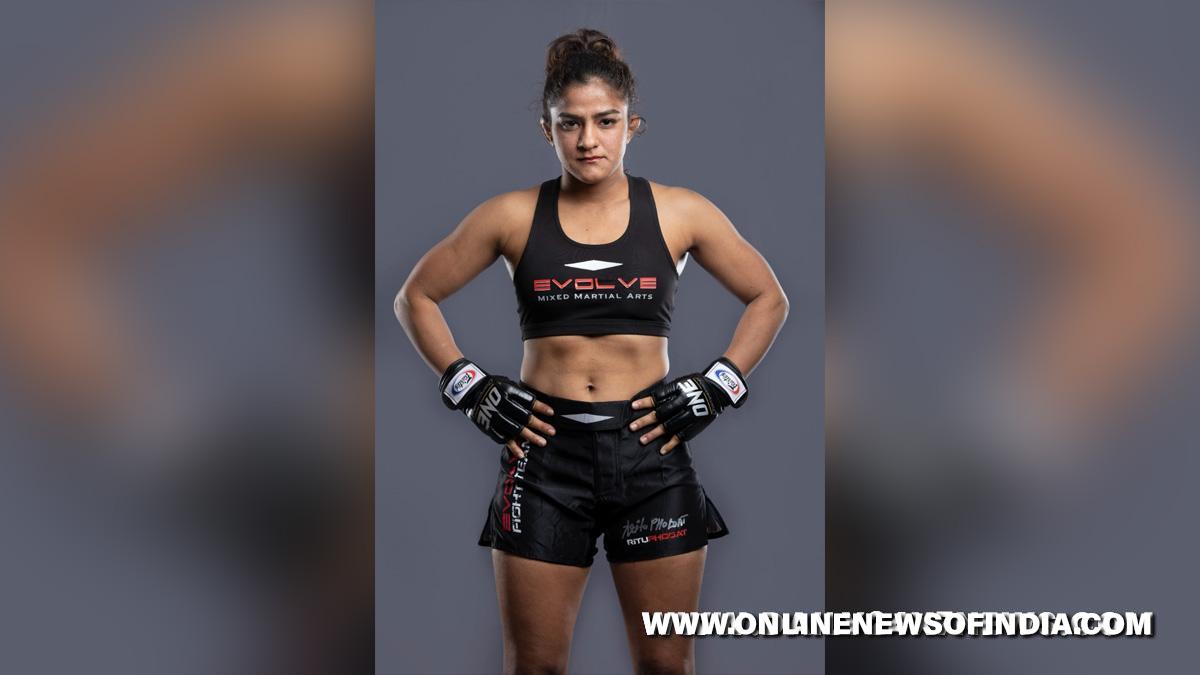 New Delhi : Wrestler-turned-Mixed Martial Arts (MMA) fighter Ritu Phogat on Wednesday said that win against Japanese judoka – Itsuki Hirata at the ONE Women’s Atomweight World Grand Prix semi-finals is important because it can place an Indian woman on the global MMA stage.After winning six of her first seven fights since making a transition to the MMA circuit, the 27-year-old Ritu is now ready to take on the ultimate challenge.Set to face-off against the undefeated Japanese judoka, Itsuki Hirata at the semi-finals in Singapore at ONE: NEXTGEN, Phogat is leaving no stone unturned when it comes to training.”I’ve always been blinker-focused towards the Grand Prix and it is closer than I can imagine. It is important for both me and my country because it can place an Indian woman on the global MMA stage. India has never had a female MMA champion in the past and now it is time for us to change the game,” said Ritu in a virtual press conference on Wednesday.Commenting on how she plans to take on her opponent, Hirata who is a Judo expert and a fellow grappler, Ritu said, “My opponent is definitely formidable because she has a very strong background in Judo. I am working on augmenting my ground game and sharpening my striking capabilities. And although people may think that our styles are similar, I am certain that my wrestling background will give me an edge. Since we both are grapplers, I assure you that this showdown is going to be etched in the minds of the viewer.”Talking more about her training regimen in the days leading up to the semi-finals, the Indian said she is currently giving it her best and training twice a day, six times a week.

“It is always effort over excuses for me. Sometimes, I even train thrice a day because my father has always told me that hard work is the only shortcut to championship,” she said.”Like they rightly say, hard work betrays none, and focus and efforts are well within your circle of influence. The more I train, the more confident I am and the more equipped I am, the more unassailable I am. From wrestling and strength conditioning to sparring and striking, my training covers a vast set of MMA skills,” she added.Lamenting about her time away from home in India and missing Diwali celebrations for a second year in a row, Phogat puts on a brave front and says, “My Diwali gift to my family and all my fans will be my win at the semi-finals. I’ve been away from home and that has been my grim reality for a while but then I know it will eventually be worth it.”Ritu also mentioned that her family was very supportive in her transition from wrestling to MMA.”My transition to MMA has come at a time when I was at the peak of my wrestling career. The decision was triggered by our underrepresentation in the sport and I wanted the world to see India through a reimagined prism in the MMA space. My sisters and my father were very supportive and I want to prove myself worthy of their steadfast belief,” she said.On a lighter note, when asked who would she’d choose if a movie were to be made about her life and what parts would she want the filmmakers to not leave out, Ritu steadfastly said, “When it comes to sports, people only see the glory and the laurels. But I would want people to know that behind all the glamorous success is years of hard work, sweat and tears. It takes sheer grit and determination to be successful, and there is no glossing over this.””You cannot sugar coat the difficult days spent in gruelling training or the nights of feeling low after defeat. As for who I would choose to play me, I think I am the best ambassador for my life story,” she concluded.