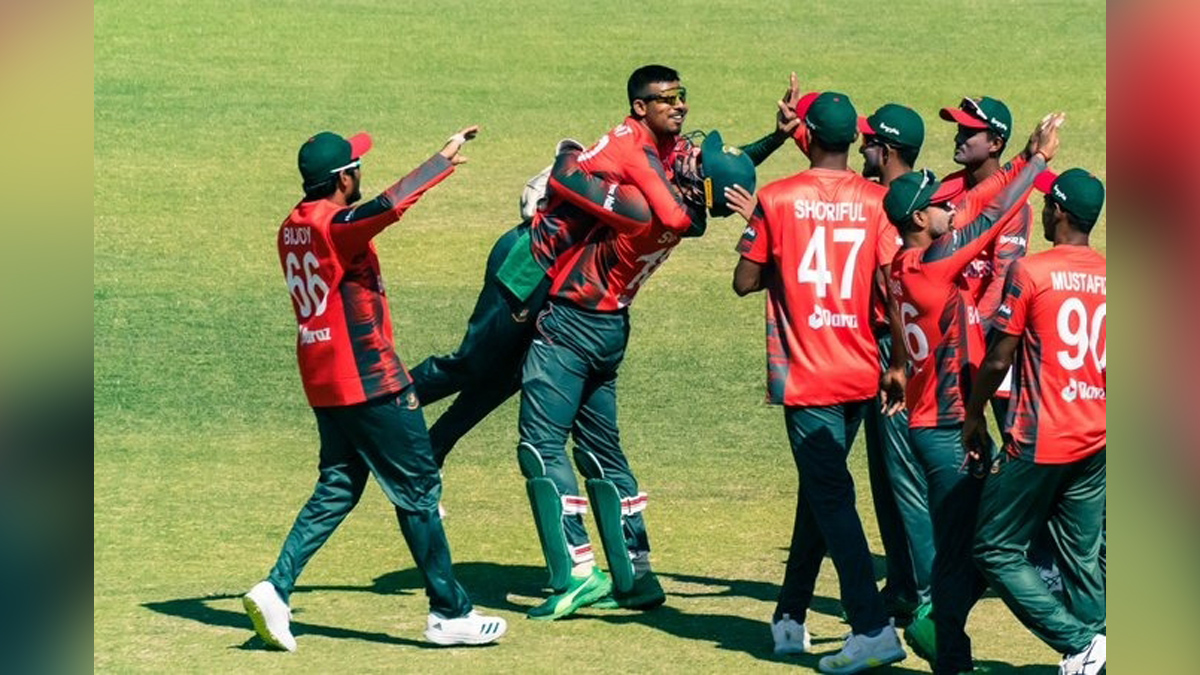 Harare : Mosaddek Hossain’s five-for and Liton Das’ fifty (56 off 33) helped Bangladesh level the three-match T20 series 1-1 with a comfortable seven-wicket win over Zimbabwe in the second T20I, here on Sunday.

After losing the first game, Bangladesh mounted a brilliant comeback in the second T20I against Zimbabwe, forcing the series into a decider.Zimbabwe’s decision to bat first after winning the toss backfired as Mosaddek Hossain spun a web around the batters.

He scalped Regis Chakabva off the very first ball of the match and followed it up with the wicket of Wesley Madhevere off the last ball of the over.Skipper Craig Ervine tried to put the spinner off his game by attempting an extravagant reverse sweep but the ball only travelled to the first slip after taking the glove.

He picked yet another wicket in the next over with a well-judged return catch to dismiss Sean Williams. Mosaddek had Hasan Mahmud to thank for completing his five-for as the latter took a great tumbling catch in the deep to bring an end to Milton Shumba’s stay at the crease.

Bowling four overs on the trot, Mosaddek finished with figures for 5/20, the second best for a Bangladesh bowler in T20I cricket. The off-spinner had Zimbabwe staring down the barrel at 32/5 at the end of 7 overs.

It took a special partnership from Sikandar Raza and Ryan Burl to pull the hosts out of trouble. The pair played risk-free cricket in the subsequent overs and it wasn’t until the 13th over bowled by Afif Hossain that they took the attack to Bangladesh. They accumulated 12 runs off the over, which set the stage for the rest of the innings.

Raza scored his second fifty in as many games. The pair added 80 runs for the sixth wicket and helped Zimbabwe post a competitive target of 136.Chasing a modest total, Bangladesh opener Liton Das got the team off to a blazing start with the bat to kill any chances for Zimbabwe to make a comeback.

He smashed Tanaka Chivanga for two sixes and a four in the third over to get the ball rolling and the onslaught continued even as Bangladesh lost Munim Shahriar in the Powerplay.Liton got to his fifty off just 30 balls in style with a boundary but was trapped in front of the stumps by Sean Williams in the very next over.

Anamul Haque was the third wicket to fall for the Tigers but the fiery start had brought the required rate to below run-a-ball.Afif Hossain and Najmul Hossain Shanto batted smartly, mixing caution with aggression to guide Bangladesh to a comfortable win with seven wickets and 15 balls to spare.
Brief Scores: Zimbabwe 135/8 in 20 overs (Raza 62; Hossain 5-20) lost to Bangladesh 136/3 in 17.3 overs (Liton 56) by 7 wickets