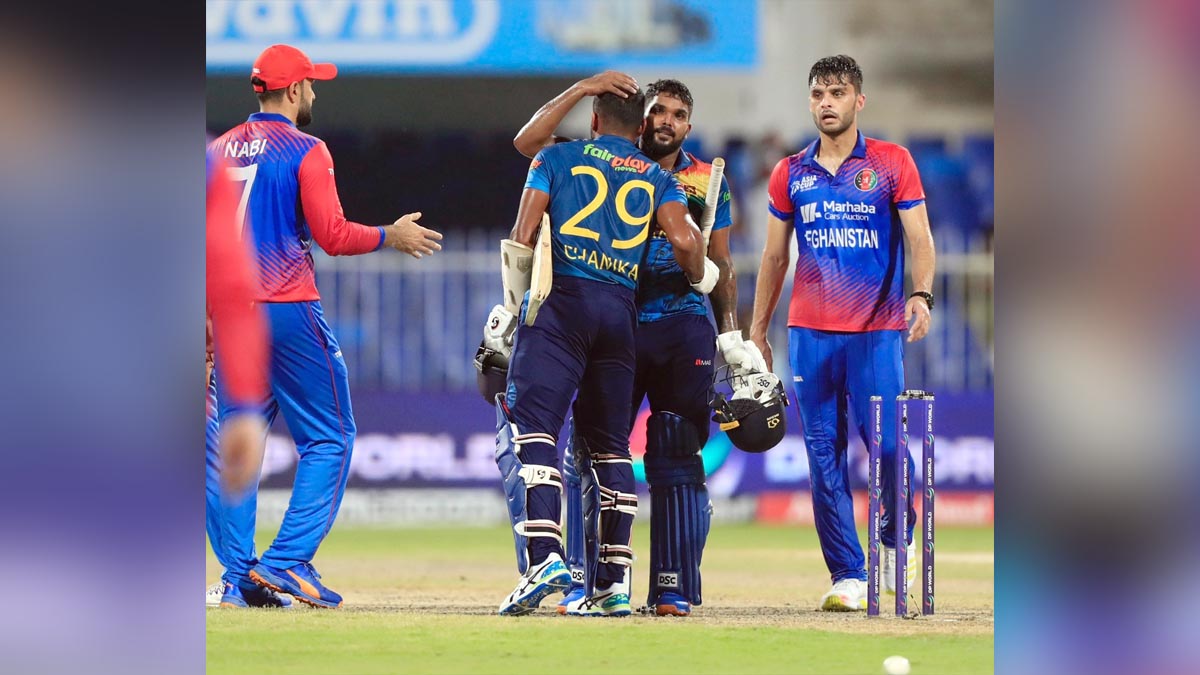 An excellent attacking knock by Rahmanullah Gurbaz (84 off 45) powered Afghanistan to a challenging 175/6 in 20 overs. Apart from Gurbaz, Ibrahim Zadran also played an impactful knock (40 off 38) for Afghanistan, who would have hoped for a blistering finish but they lost wickets in a cluster in the last few overs.

Chasing a challenging total, openers Pathum Nissanka and Kusal Mendis set the tone set for Sri Lanka by putting on a 62-run stand. The powerplay was utilised well by the duo with the latter also going after Rashid Khan, sweeping him for two sixes and taking 17 off his first over.

Naveen-ul-Haq dismissed Mendis (36 off 19) to give Afghanistan the first breakthrough. Mujeeb Ur Rahman then got rid of Pathum Nissanka (35 off 28), who tried to play a shot wide outside off but was caught by Rahmanullah Gurbaz.

While the duo fell in the space of nine balls, Sri Lanka had some good fortune coming their way. Rashid did not review an LBW call against Gunathilaka which later showed three reds.

Gunathilaka (33 off 20) was also dropped, as was Rajapaksa (31 off 14), which all allowed Sri Lanka to stay in the hunt despite losing wickets at regular intervals.
With 49 needed off the last five overs, Rajapaksa went 4, 4, 6 against Naveen ul Haq and brought the equation down. Wanindu Hasaranga struck three boundaries eventually to help chase the target in 19.1 overs with four wickets in hand.

While Gurbaz was in an attacking mode and did the bulk of the scoring, Hazratullah Zazai was not able to not find any fluency right through his innings. Eventually, Zazai played across to a length delivery and was clean bowled for 13 off 16 in the 5th over.

Even after the powerplay, Gurbaz continued his attacking intent and completed his fifty in 22 balls. He got support in Zadran and they kept the scoreboard ticking for Afghanistan.

Both Gurbaz and Zadran put on a stand of 93 runs for the second wicket. When Gurbaz got out in the 16th over, Afghanistan were 139-2 and looked set for a strong finish.

However, they lost the wickets of Ibrahim Zadran, Mohammad Nabi (1), and Najibullah Zadran (17) in the 17th and 18th overs respectively. Rashid Khan (9) managed to hit a six in the last over and took Afghanistan to 175-6, which was not enough in the end.