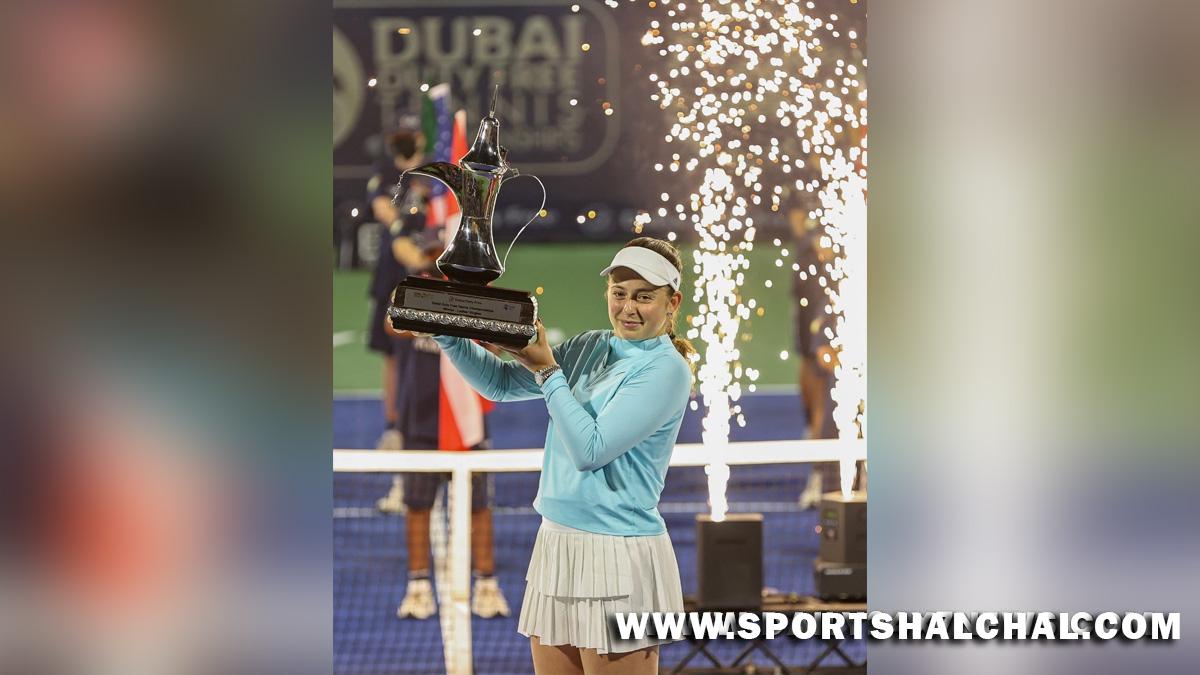 Dubai : Latvian former French Open singles champion Jelena Ostapenko stormed to the Dubai Duty Free Tennis Championships title, dispatching Veronika Kudermetova of Russia 6-0, 6-4 for her fifth career crown.The world No. 31 Ostapenko, who was ranked as high as No.5 in March 2018 following a string of superb performances including her Roland Garros crown in 2017, eased to victory after 65 minutes and is projected to rise in the rankings from No.31 to No.13 on Monday, according to wtatennis.com.Kudermetova, though, had the consolation of winning the doubles title alongside Belgium’s Elise Mertens, dismissing Ostapenko and Lyudmyla Kichenok of Ukraine in the final.”I think I played really well today,” Ostapenko was quoted as saying by wtatennis.com late on Saturday night. “In general, I’m really happy with the whole week, because it was very tough opponents I had to face every round.”

Ostapenko defeated four of her fellow Grand Slam champions to reach the final American Sofia Kenin, Poland’s Iga Swiatek, Petra Kvitova of the Czech Republic, and Simona Halep of Romania.During that run, the Latvian 24-year-old came back from a set down against Swiatek, Kvitova and Halep, saving a match point against Kvitova in their clash.Ostapenko’s superb run showed no signs of stopping during the final against Kudermetova, as she swept to her 10th match-win of the season. Her 6-0 first-set win against Kudermetova was her second in a row after also sweeping Halep 6-0 in the third set of their semifinal.”I was fighting until the very last point, I even was down a match point against Petra (Kvitova),” said Ostapenko.

“Every match was very tough, and I was fighting, that was the main thing I was doing, because I had honestly no other choice. But I’m really happy with the way I was playing all week, and I think this way I can gain more confidence.”It took Ostapenko just 23 minutes to win the opening set, as her blistering service returns helped her collect three straight service breaks. She also won 81 per cent of her service points in the first set and never faced a break point.”Today (Saturday) I knew was going to be a tough match, and I went on the court very focused,” said Ostapenko. “I really wanted to win because I love to play in the final, but I hate to lose in the final, so I really wanted to get that title. I think my mentality was good today and I was playing well.”But Kudermetova exacted revenge in the doubles final that followed, as she and Mertens defeated Ostapenko and Kichenok 6-1, 6-3 to claim the title.