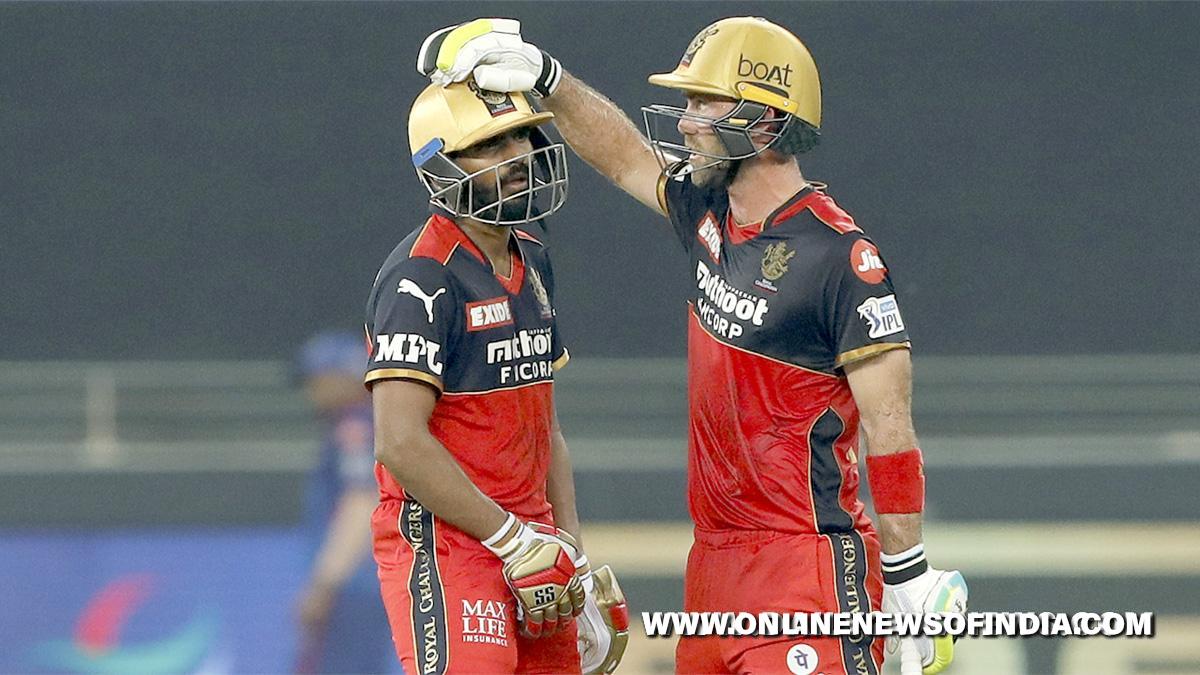 Dubai : KS Bharat (78 off 52) and Glenn Maxwell (51 off 33) hit fantastic fifties to steer Royal Challengers Bangalore to a 7 wicket victory over table-toppers Delhi Capitals in the 56th match of IPL 2021 at Dubai International Cricket Stadium, here on Friday.With this win, Virat Kohli led RCB finished the league stage with 18 points in 14 matches. They will face Kolkata Knight Riders in the Eliminator in Sharjah on October 11.Riding on some fine knocks by Prithvi Shaw (48 off 31) and Shikhar Dhawan (43 off 35), Delhi Capitals posted a total of 164/5 in 20 overs.Chasing a target of 165 runs for victory, Virat Kohli and Devdutt Padikkal were dismissed cheaply within three overs with Anrich Nortje dismissing the two openers. Things looked worrisome for RCB when Axar Patel dismissed AB de Villiers, who played a small cameo of 26 runs.But KS Bharat (78 off 52) and Glenn Maxwell (51 off 33) stitched an unbeaten 111-run stand as RCB gunned down a 165-run target in a last-ball thriller. With five needed from the last delivery, Bharat held his nerve and smashed a six straight over the head of Avesh Khan, who bowled a wide ball, to seal an incredible victory for RCB.Earlier, Prithvi Shaw and Shikhar Dhawan gave Delhi Capitals a solid start. The duo played some glorious shots and took Delhi Capitals to 55/0 after 6 overs. Even after the powerplay, Dhawan and Shaw were steady in the middle, scoring occasional boundaries and rotating the strike.

Harshal Patel finally gave Bangalore their first breakthrough as he dismissed Shikhar Dhawan for 43. Skipper Pant joined Shaw in the middle after Dhawan’s departure.In the next over, Prithvi Shaw played a slog sweep off Yuzvendra Chahal towards mid-wicket for the maximum but the leg-spinner had the last laugh as he got rid of the DC opener a few deliveries later. Shaw departed for 48, leaving DC to 101 for 2 at 11.2 overs.Pant (10) didn’t have a good outing with the bat and he was dismissed by Daniel Christian, who has been among the wickets in the tournaments.After losing the wickets of Dhawan, Shaw, and Pant in short intervals, Delhi was in a spot of bother. It was Shreyas Iyer and Shimron Hetmyer’s responsibility to bat sensibly and bring DC back in the game, however, RCB bowlers didn’t allow the Delhi batters to score freely and forced them to take chances.To give impetus to Delhi’s innings, Iyer tried to go for a maximum but mistimed a slow one from Siraj, getting caught by Christian. Iyer added 35 runs with Hetmyer for the 4th wicket before getting out in the 18th over.In the last two overs, Shimron Hetmyer dealt heavy blows with the bat, scoring 29 runs in 22 balls. Hetmyer was dismissed in the final ball of the innings but he along with Ripal Patel (7) took Delhi Capitals to 164/5 in 20 overs.
Brief scores:Delhi Capitals 164/5 in 20 overs (Prithvi Shaw 48 off 31, Shikhar Dhawan 43 off 35; Mohammed Siraj 25/2) lost to Royal Challengers Bangalore 166/3 in 20 overs ( KS Bharat 78 off 52 and Glenn Maxwell 51 off 33; Anrich Nortje 2/24)