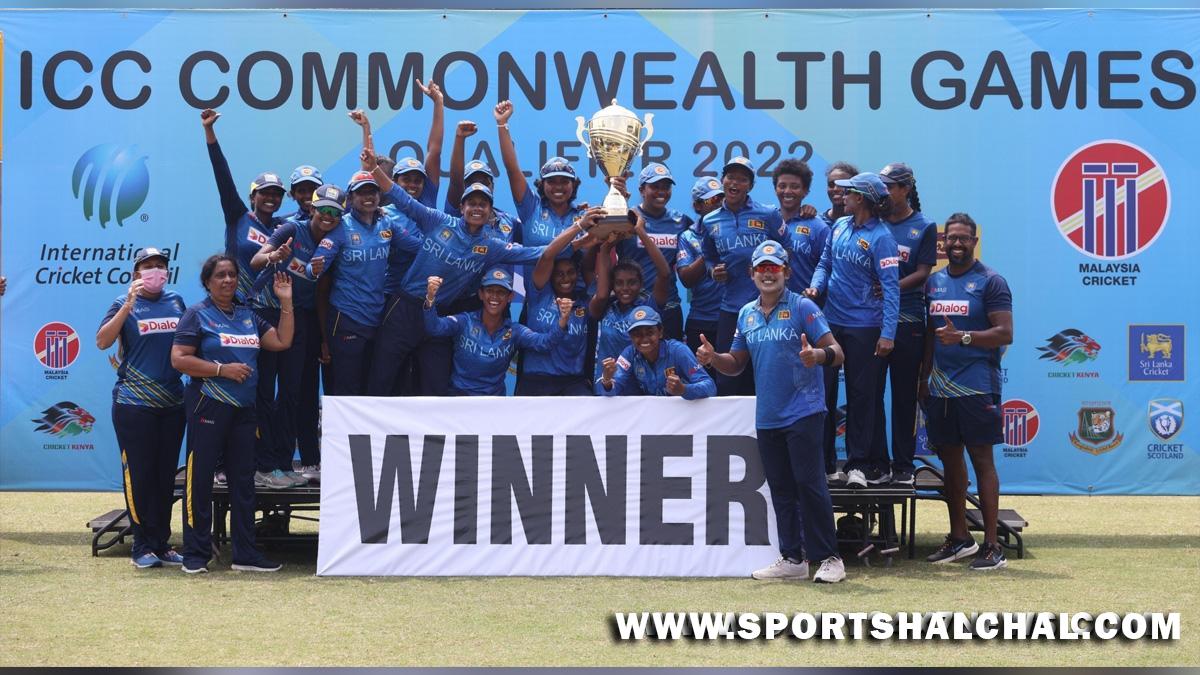 Kuala Lumpur : Sri Lanka captain Chamari Athapaththu produced a superb all-round effort to help her team defeat Bangladesh by 22 runs and win the ICC Commonwealth Games Qualifier 2022 at the Kinrara Oval in Kuala Lumpur on Monday.The last match of the five-team tournament, played to secure the final qualifying spot at this year’s Commonwealth Games, saw Chamari score 48 runs to propel Sri Lanka to 136/6 before returning figures of 3/17 to restrict Bangladesh to 114/5. It comes as a consolation for Sri Lanka, who missed the bus for the 2022 women’s Cricket World Cup in New Zealand.The Commonwealth Games Federation (CGF) will announce the cricket line-up in due course, once Sri Lanka are officially confirmed as the eighth team in Birmingham, joining England, New Zealand and South Africa in Group B while Australia, Barbados, India and Pakistan will be in Group A for the games in August. This will be the first time w’men’s cricket will be a part of the Commonwealth Games in the T20 format.

Chamari, on her part, did everything right on Monday right from winning the toss in the crucial fixture for Sri Lanka. Electing to bat, Bangladesh bowlers Salma Khatun and Soraya Azmim kept Sri Lanka quiet in the first few overs. Soraya was rewarded for consistently hitting hard lengths when Vishmi Gunaratne lobbed her to Fargana Hoque at mid-off to leave Sri Lanka at 14/1 in four overs.A few balls later, Chamari slashed Soraya over the infield for four before unleashing a barrage of sweep shots against Ba’gladesh’s spinners, two of which cleared the ropes for six. Off-spinner Salma Khatun, the only bowler up to that point to keep Chamari in check, was brought back into the attack and responded by trapping Hasini Perera plumb in front with the score of 61/2 in nine overs.Chamari muscled Rumana over extra cover for six as she approached what could have been her third half-century of the tournament. However, she missed out on her fifty when she tried to repeat the shot, only managing an edge through to Shamima Sultana behind the stumps.

Unsurprisingly, the fall of Chamari wicket allowe’ Bangladesh’s spinners to claw back before Nilakshi de Silva and Anushka Sanjeewani helped Sri Lanka accumulate 42 runs in the last five overs to take the score to 136/6.In reply, Bangladesh benefitted from a dropped catch and four overthrows in the first couple of overs. Shamima Sultana was caught in the circle by Udeshika Prabodhani off the bowling of Ama Kanchana to leave Bangladesh at 18 for one in the third over.However, left-handed opener Murshida Khatun continued her fine form by clearing the infield for boundaries on three occasions during a Powerplay that fetched Bangladesh 46 runs. But Sri Lanka’s spin quartet of Chamari, Inoka Ranaweera, Sachini Nisansala, and Kavisha Dilhari put the squeeze on Bangladesh, who could not score a single boundary in the next six overs.Chamari’s arm-ball trapped Murshida in front to leave Bangladesh at 71 for two after 12 overs, requiring a further 66 runs off 48 balls for victory. Despite a dropped catch that went for four and a no-ball from Chamari, Bangladesh were unable to fight back as Sri Lanka completed a comfortable victory.
Brief scores: Sri Lanka 136/6 in 20 Overs (Chamari Athapaththu 48; Nahida Akter 2/34) beat Bangladesh 114/5 in 20 Overs (Murshida Khatun 36; Chamari Athapaththu 3/17) by 22 runsPlayer of the Match: Chamari Athapaththu

A rivalry has developed between India and England on the hockey field : Captain…