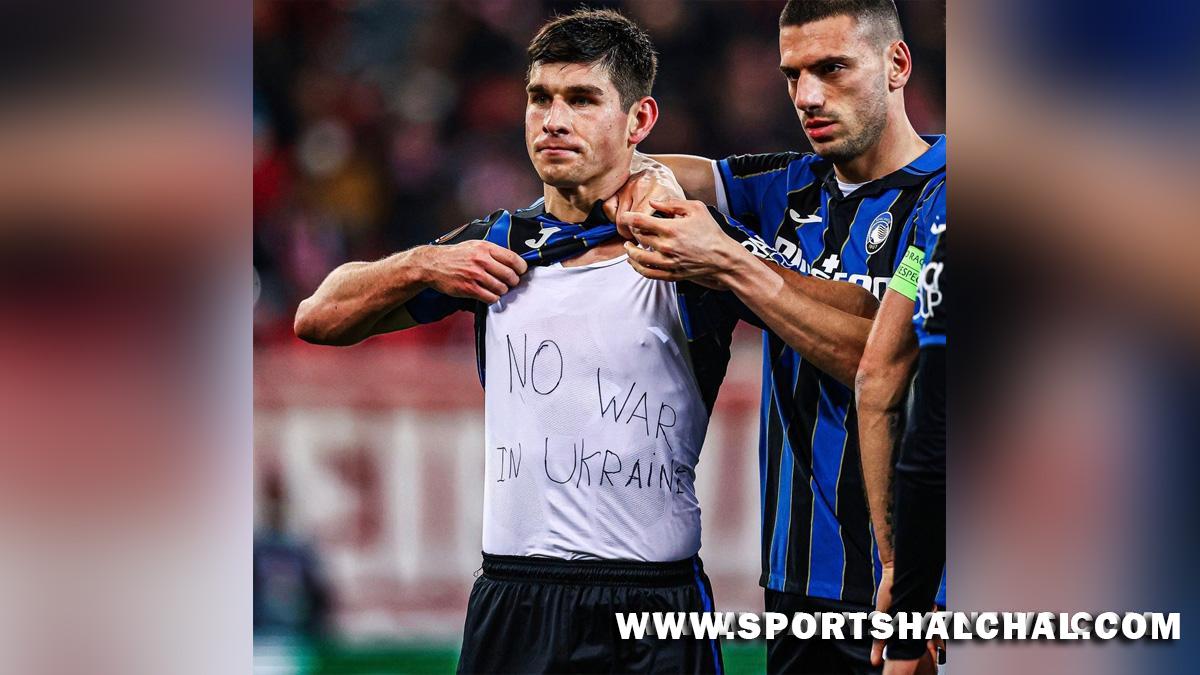 London : Serie A club Atalanta’s star midfielder Ruslan Malinovskyi made a powerful statement against Russia’s invasion of his country when he revealed a ‘No war in Ukraine’ T-shirt message after scoring against Olympiakos Piraeus during a Europa League round-of-32 second-leg match in Greece.The 28-year-old midfielder had worn a white T-shirt under his club jersey and revealed the ‘No war in Ukraine’ message after scoring the first of his two goals in the 66th minute.Atalanta defeated Olympiakos 3-0 for a 5-1 aggregate win to advance to the last-16.After slotting home the goal, Malinovskyi ran towards the crowd before stopping and holding up his jersey to reveal the message.Before the match, Malinovsky had shared a link with fans on social media urging them to donate to the Ukrainian military. “Ukraine is under attack right NOW. Please, spread the word and pray for our country,” the midfielder tweeted along with the link.

The football world has reacted strongly to the invasion, with star Polish striker Robert Lewandowski expressing solidarity with the people of Ukraine.The 33-year-old Bayern Munich striker has also supported Poland’s decision to not tour Russia for the World Cup playoffs to secure a berth to the World Cup in Qatar later this year.
According to sportsbrief.com, Poland, Sweden and the Czech Republic have issued a joint statement saying the three nations will not play the World Cup playoffs in Russia. Russia’s game against Poland in Moscow is in serious doubt following the joint statement.”It is the right decision!. I can’t imagine playing a match with the Russian National Team in a situation when armed aggression in Ukraine continues. Russian footballers and fans are not responsible for this, but we can’t pretend that nothing is happening,” Lewandowski said in a strongly-worded tweet on Saturday.