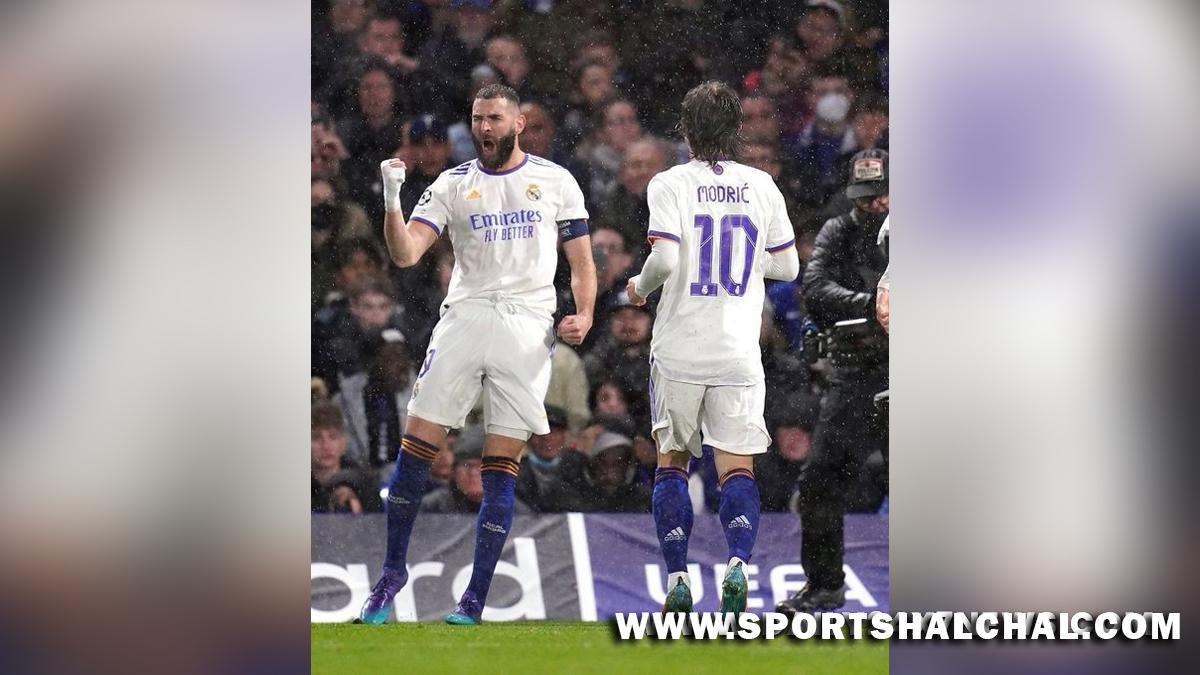 London : Real Madrid have one foot in the door of the UEFA Champions League semifinal after Karim Benzema, with a stunning hat-trick, bullied Chelsea 3-1 here on Thursday. Benzema opened the scoring in the 21st minute as he got a great cross from Vinicius and headed it into the back of the net to give the visitors a 1-0 lead at Stamford Bridge. Three minutes later he did it again as this time it was Luka Modric with a super service to Benzema who again managed to head the ball into the net to double Real Madrid’s lead. In the 30th minute it was Militao again off a Toni Kroos corner but this time his header went right into the hands of Mendy. Chelsea reduced Madrid’s lead to one as Kai Havertz in the 40th minute was able to head one in past Courtois. Kai Havertz dragged Chelsea back into the contest from nowhere before half-time, but the luckless Edouard Mendy gifted Benzema his hat-trick goal with an undersold pass. A minute into the second-half Real Madrid regained its two-goal lead as Benzema was able to intercept a weak pass from Mendy the keeper who was out of his net and managed to shoot the ball into the empty cage.

The prolific striker moved his competition goal return to 13 in just seven matches. Benzema took his season’s tally to 37 goals in 36 matches for Real, handing his side a major chance of making the semifinals in their bid to land a 14th Champions League title. The final whistle blew after five minutes of added time and Real Madrid had pulled off an impressive win on the road thanks to another hat-trick from their star striker Karim Benzema. After watching his side fall to a 3-1 defeat in the Champions League, Chelsea coach Thomas Tuchel reflected on a below-par performance from his side. “It is a heavy loss. It was one of the worst first halves that I saw from us here at Stamford Bridge. At this kind of level you cannot play like this individually or as a team,” Tuchel told to Chelsea official website. “From all of us, we were by far not good enough; we were not doing what we are used to doing. The first half was so far from any standards that we set ourselves,” he said. Tuchel pinpointed a lack of precision in the pass and strength in the tackle as reasons behind the difficult first half, while chances spurned after the break also proved costly. The return leg is scheduled for next Tuesday, April 12 in Madrid at the Estadio Santiago Bernabeu where Real Madrid will look to book their spot in the semifinals of the UEFA Champions League.