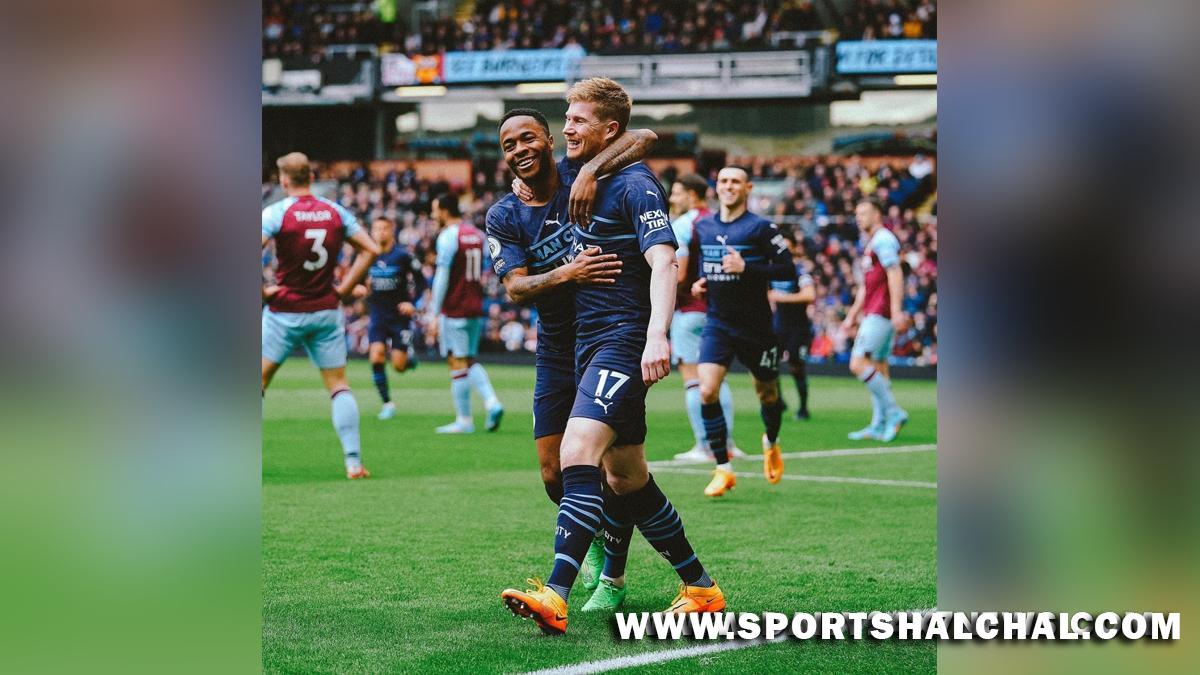 Premier League: No change at the top as Manchester City, Liverpool win

London : Manchester City remain on top of the Premier League after a 2-0 win away to struggling Burnley. Any pressure Pep Guardiola’s side could have felt after Liverpool’s win at home to Watford in Saturday’s early kick off was dispelled in the fifth minute when Kevin de Bruyne’s finish from Raheem Sterling’s volley pass put them ahead.Sterling was again the provider in the 25th minute when he found space down the right to cut the ball back for Ilkay Gundogan to wrong-foot Burnley keeper Nick Pope with a powerful half-volley.Pope kept Burnley in the game with several decent saves before halftime, but Burnley hardly threatened with just three shots throughout, while their rivals enjoyed a 77 per cent possession.Liverpool kicked off the weekend with a comfortable but unimpressive 2-0 win at home to Watford in Jurgen Klopp’s 250th game in charge.

Diogo Jota’s header, his 20th goal of the season, put Liverpool in front in the 22nd minute, but it was not until the last minute of normal time that Fabinho’s penalty assured all three points against a spirited rival, Xinhua reports.Chelsea’s preparations to face Real Madrid in the Champions League next week didn’t go to plan as they suffered a 4-1 defeat at home to Brentford, who took a massive step towards assuring their top-flight future.Things looked to be going to script when Antonio Rudiger fired Chelsea ahead in the 48th minute, but Vitaly Janett’s first goal of the match two minutes later made it 1-1.Christian Eriksen put Brentford ahead in the 54th minute and Janett’s second left Chelsea reeling in the 60th minute.Yoane Wissa had been excellent for the visitors and got his reward when he netted Brentford’s fourth goal with three minutes left to play.Manchester United dropped more points at home as they were held 1-1 by Leicester City.

Kelechi Iheanacho fired Leicester ahead in the 63rd minute, but Fred leveled for United three minutes later. James Maddison had what would have been the winning goal ruled out eight minutes from time after Iheanacho was ruled to have fouled Raphael Varane in the buildup.Jonny’s opening goal in the seventh minute and the first own goal of Ashley Young’s long career gave Wolverhampton Wanderers a 2-1 win at home to Aston Villa in the West Midlands derby to keep his side’s European hopes alive. Ollie Watkins scored the visitors’ goal with an 86th-minute penalty.James Ward Prowse’s spectacular free kick earned a 1-1 draw for Southampton away to Leeds United, who had taken a first half lead through Jack Harrison.Brighton and Norwich drew 0-0 with a result that ends both sides’ six-game losing streaks, but which will make neither of the two sides happy. Brighton had 30 shots in the game, but managed to get just four on target.