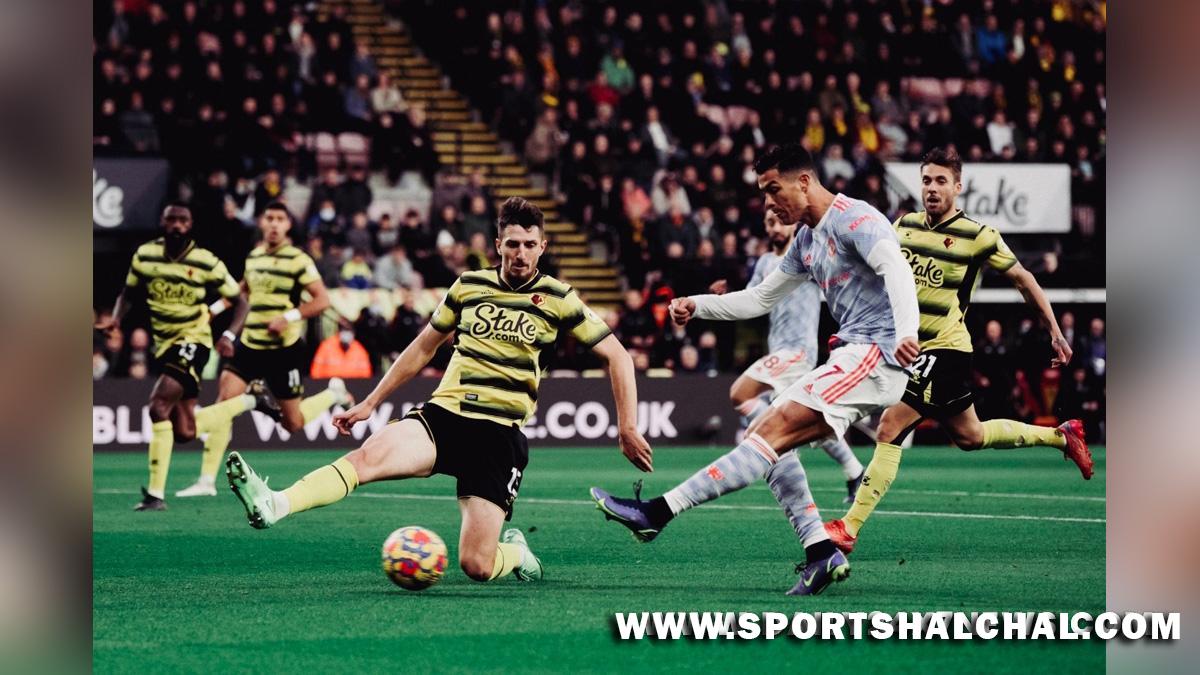 Manchester : Manchester United created numerous chances but their profligate players failed to capitalise on any of them as Watford held them goalless in a Premier League match here on Saturday.Cristiano Ronaldo and Bruno Fernandes were the chief culprits, missing the easiest of their chances, as United failed to beat a lower-placed team on their home turf, leaving their fans frustrated and expressing their dismay at the team towards the end of the match.Interim boss Ralf Rangnick made four changes to his line-up to face the Hornets from the United XI that had started the draw against Atletico Madrid in midweek.A decent first-half display by the Red Devils promised much, with chances being racked up, but Watford were dogged and went on to survive some United golden opportunities across the 90 minutes to take home a valuable point while putting a dent in United’s push for a Champions League qualification spot.With Harry Maguire on the bench, Bruno Fernandes took on the captain’s role and was certainly prominent in the opening half-hour as he chased his 50th goal for United.

He was quite influential in the United ranks but a goal eluded him on Saturday.His fellow countryman Cristiano Ronaldo had the first effort, after just four minutes, but hit the post with his sweeping right-foot shot following a move constructed by Nemanja Matic and Anthony Elanga.Then Fernandes took centre stage. After nine minutes, he dummied the Watford defence twice before letting go with a drive that hit Ronaldo in the penalty box. Three minutes later, Ronaldo and Elanga were the source of the next move that fed Fernandes, but ex-United goalkeeper Ben Foster got an arm to his close-range strike when a goal looked a cert.Ronaldo had a goal chalked off for offside in the 15th minute. A Paul Pogba cross was on the money for Fernandes as he stole in ahead of the Watford defence, but the Portuguese midfielder volleyed just wide.United continued in the same manner, missing chances. There were loud appeals for a penalty in the 42nd minute when Elanga and former United player Craig Cathcart came together, but referee Kevin Friend waved away Matic’s pleas.Watford had offered little in front of goal in the first half but came close within the opening moments of the second when Samir headed narrowly wide from a corner.

There was then another appeal for a penalty in the 55th minute, when Ronaldo went down under a challenge from Hassane Kamara. Referee Friend again didn’t see a problem and neither did VAR after a look at the incident, said a report on Manchester United’s official website.Having unfortunately got in the way of a Fernandes shot in the first half, Ronaldo then saw his effort in the 61st minute hit Elanga following great work on the byline by Fernandes. The two then combined again, with Foster gobbling up the latest chance in the 67th minute, as the Portuguese midfielder’s cross appeared to come off his countryman’s chest and almost roll in at the far post, only for the goalkeeper’s intervention. Shortly after, another chance went by as Aaron Wan-Bissaka headed wide.Substitute Jadon Sancho almost curled in a superb late winner against his former club, but his 90th-minute shot from 20 yards went just over the crossbar, before Fernandes planted a long ranger into Foster’s arms in stoppage time.In the third and final minute of the added-on period, Watford’s Ismaila Sarr came close with his own piledriver from the edge of the penalty area, but it whistled just past David De Gea’s posts.In other matches on Saturday, Tottenham Hotspur thrashed Leeds United 4-0 in an away match, Ashton Villa beat Brighton 2-0, Newcastle United defeated Brentford 2-0 while Crystal Palace played out a 1-1 draw with Burnley.

Champions League : No kisses for Haaland but a late artistic goal as Manchester City…

Impossible to have both Pant and Karthik in the playing XI for Asia Cup: Cheteshwar…