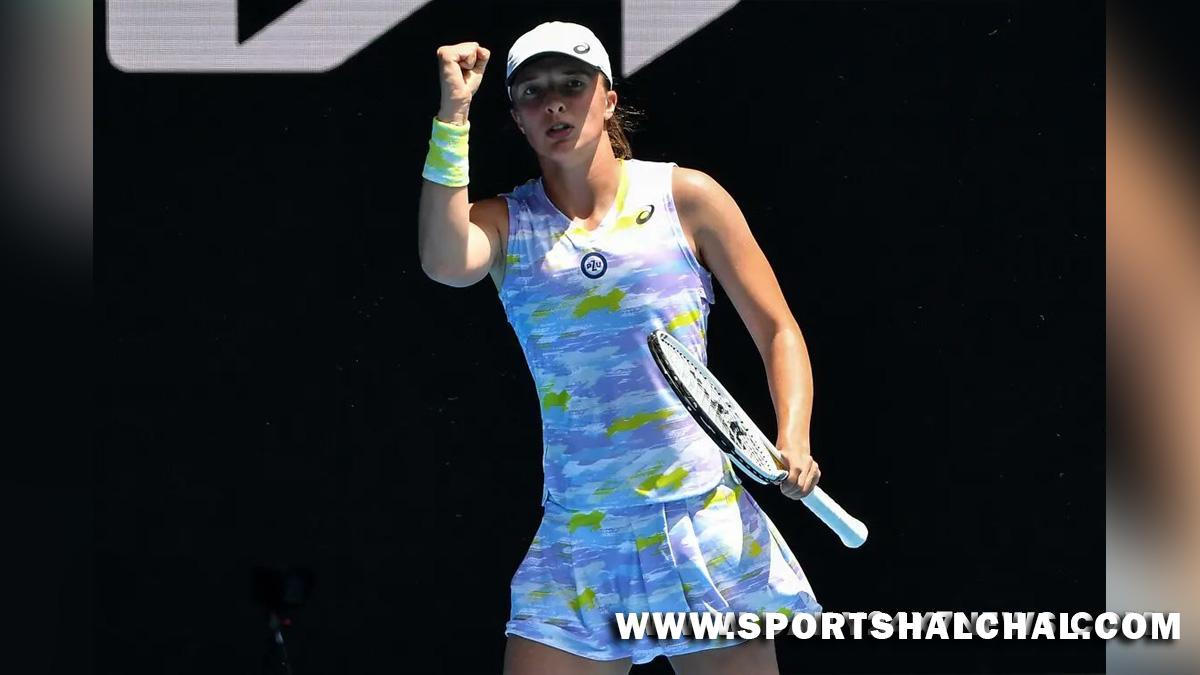 Melbourne : Polish tennis ace Iga Swiatek dropped her first set of the Australian Open, but rallied to beat Sorana Cirstea of Romania 5-7, 6-3, 6-3 to reach her first quarterfinal at Melbourne Park here on Monday.Swiatek, the 2020 French Open champion and No.7 seed here, is into her first Grand Slam quarterfinal outside of Paris, where she also reached the quarterfinal in 2021. However, world No.38 Cirstea competed well before the 20-year-old Swiatek ultimately triumphed in a 2-hour and 28-minute contest.Swiatek was the only player last season to make the fourth round or better at all four Grand Slam events. Despite being pushed hard by Cirstea, Swiatek now has a 29-2 win-loss record against opponents ranked outside the top-30 in her Grand Slam history.French tennis stalwart Alize Cornet finally reached a major quarterfinal in her 63rd Grand Slam, defeating Simona Halep of Romania 6-4, 3-6, 6-4, to achieve the long-awaited feat in Rod Laver Arena.

This was the fourth time in five career meetings that Cornet defeated Halep, breaking a winless streak in fourth-round showings at majors dating back over a decade. She will face No.27 seed Danielle Collins of the US, who defeated No.19 seed Elise Mertens of Belgium 4-6, 6-4, 6-4, in the last-eight.At 19, Cornet was a point away from the quarterfinals in Melbourne 13 years ago before eventually losing to Russia’s Dinara Safina, the first of five fourth-round appearances she’d made at majors prior to this fortnight in Melbourne.Despite losing a set and a break lead against Halep, Cornet won three of the last four games to wrap up her second win against a seed in the first four rounds.”It was definitely very hard conditions to play,” Cornet said. “I could see that Simona was also struggling, like me. We were both fighters on the court out there, and really giving everything we had, leaving it all on the court.

It was such a drama, because I was one set one break up and I don’t know how many games I lost in a row and finally came back in the third. I was so tired I couldn’t think anymore, which was a good thing I think at the end, because it just made me keep playing, keep trying, and at the end I made my first quarterfinals.”By reaching her first Grand Slam quarterfinal, Cornet has also set a new record for most majors played before reaching one. Tamarine Tanasugarn of Thailand held the prior record, achieving the feat in her 45th at Wimbledon in 2008. Cornet is also the first Frenchwoman to reach an Australian Open quarterfinal since 2009.Cornet picked up her 48th career win against top-20 players against world No.15 Halep, seven of which have come at majors. She’s now won her last four against top-20 players at the sport’s biggest tournaments, including an upset of No.3 seed Garbine Muguruza of Spain in the second round.On facing Collins, Cornet said, “That’s the first time we play with Danielle Collins. Well, that could be somewhat drama, this match for sure. I see how she is on the court. She’s like a lion. She impresses me a little bit because she’s so intense. I’m intense too but I think she’s next-level intense.