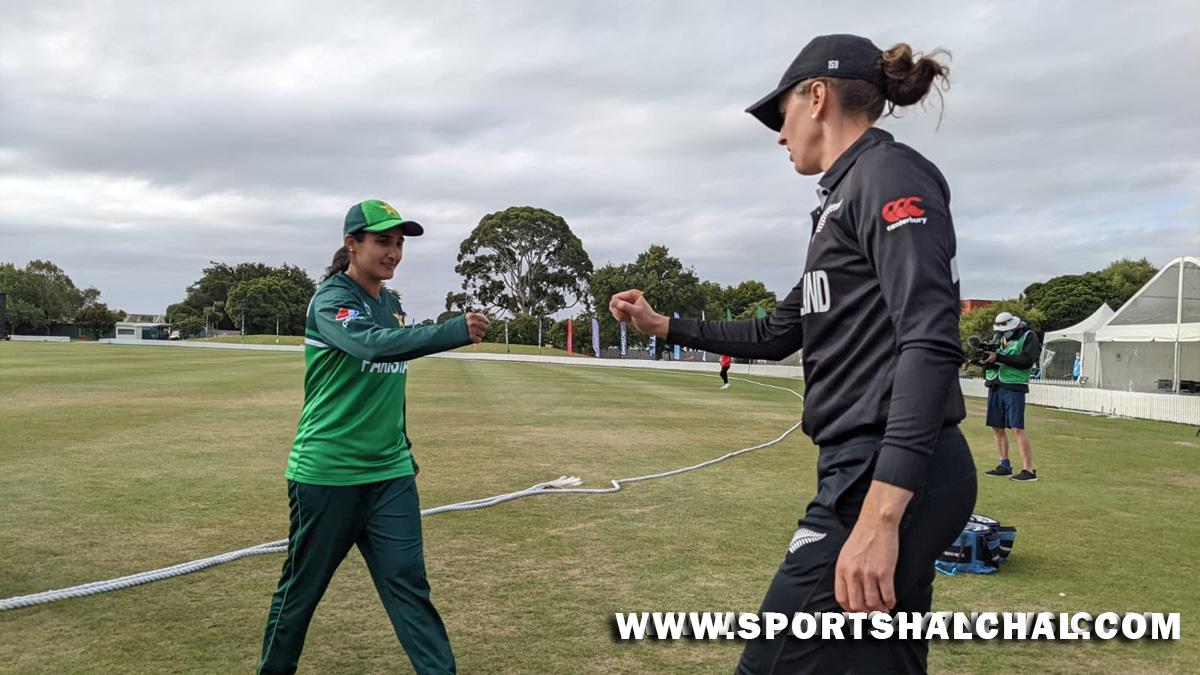 Lincoln : Pakistan inflicted an upset four-wicket win over hosts New Zealand at the Bert Sutcliffe Oval, while Australia thrashed West Indies by 90 runs at Lincoln Green in the warm-up matches of the ICC Women’s Cricket World Cup on Sunday.For Pakistan, Aliya Riaz was the hero, bludgeoning an unbeaten 62 from 52 balls, including eight boundaries and hitting the winning runs in the final over of play.Needing close to seven an over in the final 10 overs to reach the target of 229, Riaz and Nida Dar (54 off 59 balls) struck eight boundaries to finish the job.For Pakistan, Sidra Amin (34 off 47 balls), Omaima Sohail (31 off 34 balls) and skipper Bismah Maroof (28 off 58 balls) were the other contributors with the bat.Nine bowlers were utilised by captain Sophie Devine in the second innings with Jess Kerr taking 2/30 from her seven overs.Kerr also provided highlights with the bat, hitting an unbeaten 34 from just 27 balls with the help of three boundaries, moving the tournament hosts to a seemingly defendable score of 229.

Cruising at 142/2 through Maddy Green (58 off 69 balls) and Amy Satterthwaite’s (80 off 85 balls) partnership, New Zealand lost six wickets for 30 runs in their stumble before the late exploits from Jess saved the hosts.Nashra Sandhu played a starring role in the collapse, taking four wickets for 32 runs. New Zealand chose to rest the in-form leg-spin all-rounder Amelia Kerr during the batting innings while returning figures of 1/16 in four overs.In the other warm-up match, Ellyse Perry starred with the bat and ball in Australia’s thumping win over the West Indies.Ellyse top-scored with 62 off 77 balls to take Australia to 259/7. Apart from her, young all-rounder Annabel Sutherland chipped in with an unbeaten 54 off 37 balls.Openers Alyssa Healy and Rachael Haynes had an opening partnership of 42 while captain Meg Lanning was bowled by veteran spinner Anisa Mohammed for three.

But Ellyse and then Annabel ensured that Australia got a total above 250.In reply, Ellyse claimed Deandra Dottin and Kycia Knight in one over to give big blows to the West Indies run chase. Their troubles increased as opener Rashada Williams retired hurt on six after being hit on the helmet. Hayley Matthews (24 from 38) and captain Stafanie Taylor joined forces for a partnership of 43 for the third wicket.But leg-spinner Alana King turned the screws with a double blow, removing Hayley and then Shemaine Campbelle in the same over. Annabel then returned to make an impact with the ball to claim the big wicket of Stafanie Taylor for 67.From there, any hope of a West Indies fightback ended and they were eventually restricted to 169/9 in their 50 overs.Brief Scores: New Zealand women 229 all out in 45 overs (Amy Satterthwaite 80, Maddy Green 58; Nashra Sandhu 4/32) lost to Pakistan women 233/6 in 49.2 overs (Aliya Riaz 62 not out, Nida Dar 54; Jess Kerr 2/30) by four wickets.
Australia women 259/7 in 50 overs (Ellyse Perry 62, Annabel Sutherland 54 not out; Stafanie Taylor 3/51) beat West Indies women 169/9 (Stafanie Taylor 66, Hayley Matthews 24, Ellyse Perry 2/6) by 90 runs.