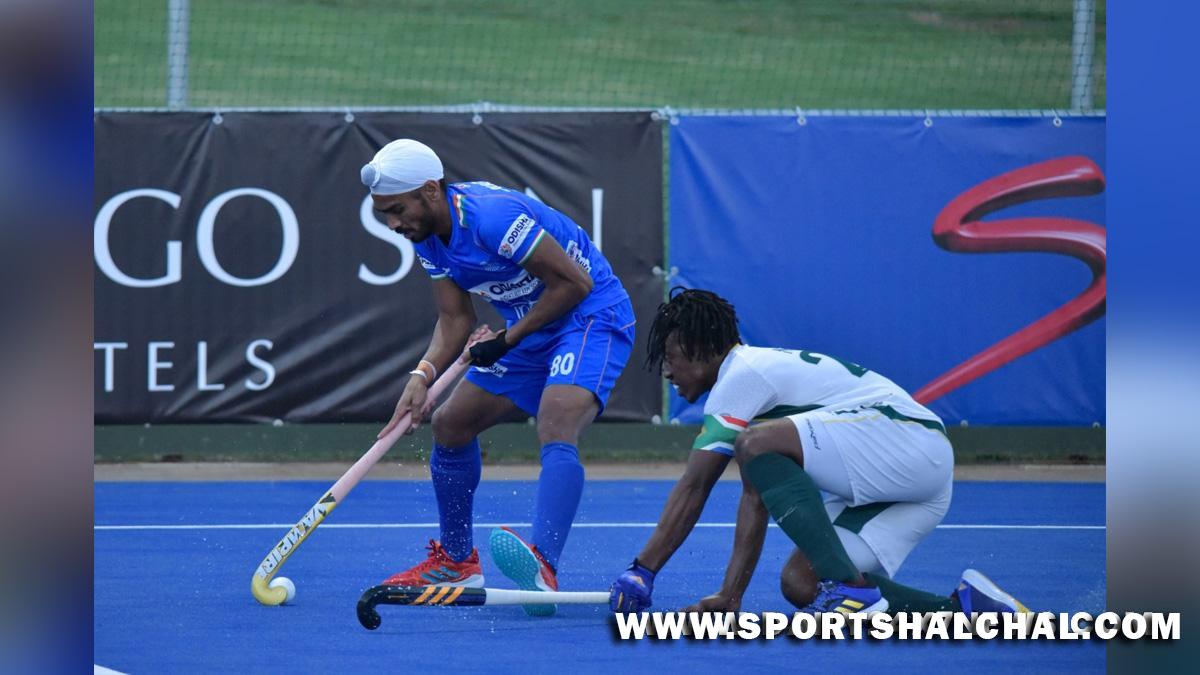 Potchefstroom (South Africa) : Promising new drag flicker Jugraj Singh expressed that his experience with the Indian Men’s Hockey Team during the FIH Hockey Pro League matches in Potchefstroom where they played France and South Africa was a memorable one.”Making my debut in an important event like FIH Hockey Pro League was definitely an emotional moment for me and getting a hat-trick only in my second game for India (against South Africa) was very special. It’s amazing how much support I have received from the entire team and I believe there is a lot for me to learn from each of their experiences,” stated the 26-year-old from Attari, Amritsar.Having been part of India’s successful outing where they won 5-0 against France, beat South Africa 10-2 in both matches and lost 2-5 to France, Jugraj feels he is better equipped with the knowledge of what it takes at this level to play for India and also how to be mentally ready for back-to-back matches.”We had created a lot of match scenarios when we trained in SAI, Bengaluru but to actually play against a real opponent is quite different and how we need to overcome the success or defeat in a game and quickly move on to the next one. This was one of the most important things I learnt during this outing,” he added.

From a humble background, Jugraj’s father worked for daily wages as a coolie at the border in Attari, the youngest of five siblings, Jugraj is the only one in the family to choose sports as a career. Having shifted to a sports hostel at a young age of 11, he overcame various struggles in life. He went on to earn a job in the Indian Navy from where his career took shape, playing domestic matches.”There has been a lot of struggle and hard work to get till here and I am prepared to work harder to make a place in the team. My father was a coolie at the border, and it was really tough for him to manage everything,” he added.”I started playing hockey at the age of six. I used to play with my friends in the village, then I got to know about Baba Uttam Singh National Hockey Academy in Khadur Sahib, where everything was offered free of cost, from hockey to studies to food to everything. I felt this might help me improve my life. I thought if not sports, then at least a good qualification would help get a respectable job.”

At the Khadur Sahib hostel, Jugraj honed his skills under coach Balkar Singh. After some years, he got an internship at the Punjab National Bank (PNB) in Delhi and played in various tournaments for almost three years. Then, in 2016, he got a job at the Indian Navy, which changed the course of his life. “Hockey has changed my life since the day I took up that hockey stick. It has really uplifted my family’s financial conditions,” he said.The versatile player has plied his trade for the Services Sports Control Board in the domestic circuit. During Services Sports Control Board’s Gold medal-winning campaign at the 10th Hockey India Senior Men National Championship 2020 (A division), Jugraj was awarded the Best Player of the Tournament for his performance.He earned his maiden call-up for the Indian National camp this year after playing in the 1st Hockey India Senior Men Inter-Department National Championship 2021, an exclusive tournament for PSUs that was introduced by Hockey India in 2021. “This tournament for departments was organised for the first time, and I got selected for the camp. I feel very lucky and it is a great initiative by Hockey India, it has opened gates for players like me,” he concluded.