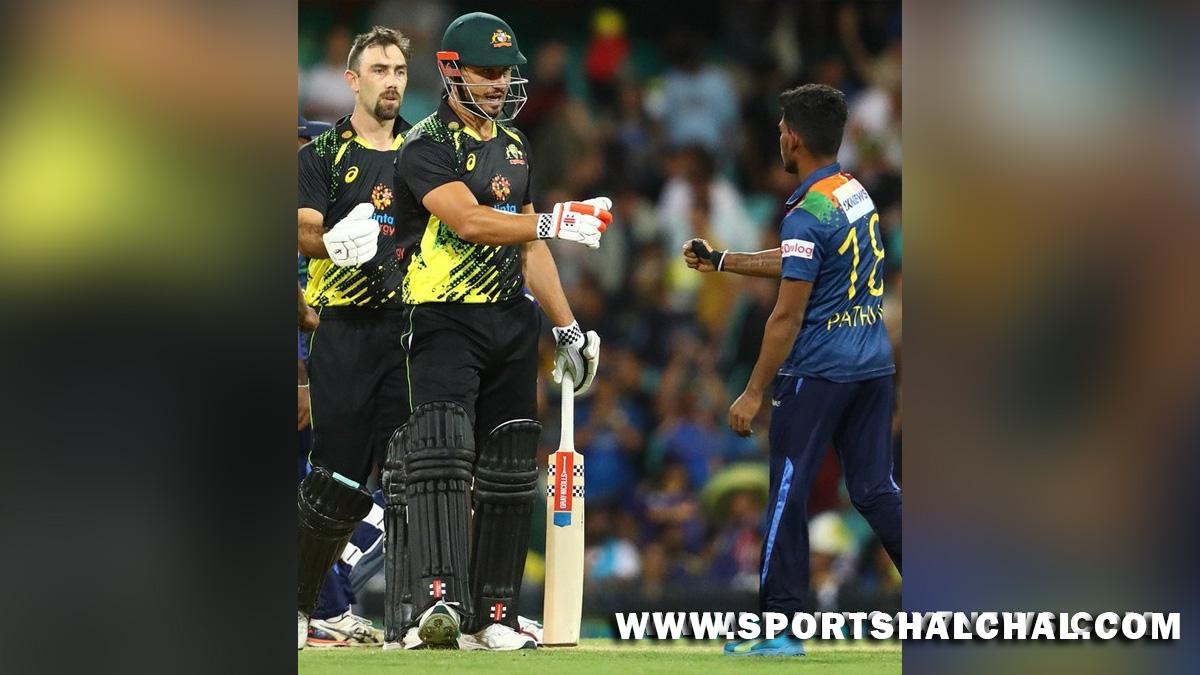 Sydney : Brilliant bowling by pacer Josh Hazlewood helped Australia hold their nerve to get the better of Sri Lanka in a thrilling Super Over in the second T20I here on Sunday. Hazlewood was spot on with his bowling in the Super Over and restricted Sri Lanka to just five runs. Maxwell and Stoinis then completed the formalities with the bat and won the match in three balls, helping Australia take a 2-0 lead in the series.Sri Lanka, who lost the opening T20I match on Friday, decided to bowl first after electing to bat first. They managed to restrict Australia to 164/6 in their allotted 20 overs thanks to a knock of 48 by Josh Inglis with Dushmantha Chameera (2/30) and Wanindu Hasaranga (2/33) leading the bowling efforts for Sri Lanka.Sri Lanka made a match of it as they rode on a 53-ball 73 by Pathum Nissanka and 19-ball 34 by skipper Dasun Shanaka helping them reach 164/8 in 20 overs. Hazlewood claimed 3/22 for Australia.Sri Lanka had to make a forced change with Binura Fernando being unavailable for this match, with round-arm seamer Nuwan Thushara replacing him.

Australia, on the other side, rested Mitchell Starc and brought the Kane Richardson.Ben McDermott, the highest scorer for Australia in the first T20I, started with intent but soon fell to debutant Nuwan Thushara, failing to clear Wanindu Hasaranga at long-on. Inglis top-scored for Australia with 48 from 32 while skipper Aaron Finch, who seemed set in the middle lost his wicket at a crucial time to a wrong-un from Wanindu Hasaranga.Maxwell was Hasaranga’s second victim and fell for 15. It was all up to Steven Smith and Marcus Soinis to finish strongly in the death overs but Dushmantha Chameera snapped them both up in consecutive deliveries. Matthew Wade did manage to make an impact towards the end as he hit a four and a six in the 20th over helping Australia finish 164/4 in 20 overs.While Sri Lanka bowlers were brilliant in the second half of the innings, Australia once again failed to finish strongly with the bat, going from 92/2 at the end of 11 overs to 164/6 at the end of 20.The Australian bowlers were on the money from the start and picked up crucial wickets early on.

Hazlewood sent Danushka Gunathilaka back to the pavilion in the first over for a duck and followed it up with the scalp of Avishka Fernando in his next over, according to a report in the ICC’s official website.Charith Asalanka didn’t trouble the scorers either and was the second batter to depart without opening his account.Opener Pathum Nissanka and Dinesh Chandimal came to the rescue before Adam Zampa struck crucially to remove the latter after the 10-over mark, the report said.Captain Dasun Shanaka played a brilliant knock of 34 of 19 deliveries, which included two fours and three sixes, kept Sri Lanka in the chase but was unlucky to get run out. Hasaranga played a crucial cameo of 13 while Nissanka too exploded towards the end.With 19 needed off the last over, Nissanka smashed a four off the first ball but was out for 73 two balls later. Needing 12 off 3, Maheesh Theekshana smashed a six despite Steve Smith’s best efforts on the boundary and took a single off the next.With five needed off the last ball, Chameera, playing his first ball, smashed a four-over Stoinis’ head to force a Super Over.But in the end, it proved insufficient as Australia won the match in the one-over eliminator.
Brief scores:
Australia 164/6 in 20 overs (Josh Inglis 48; Dushmantha Chameera 2/30, Wanindu Hasaranga 2/33) beat Sri Lanka 164/8 in 20 overs (Pathum Nissanka 73, Dasun Shanaka 34; Josh Hazlewood 3/22) in Super Over.