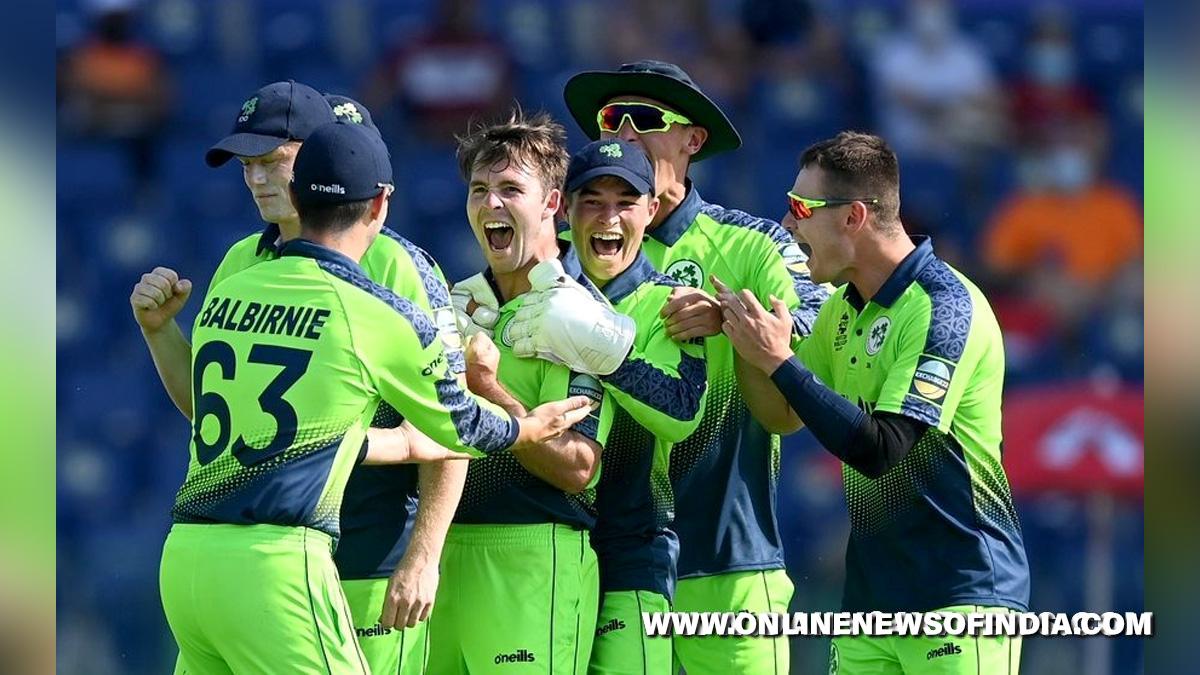 Abu Dhabi : Curtis Campher claimed four wickets off four consecutive deliveries to inspire Ireland to a seven wickets victory against the Netherlands in a first-round match of the T20 World Cup here on Monday.Campher became only the third bowler to achieve this feat this historic feat in white-ball cricket as he destroyed the Netherlands’ middle-order and they were bowled for 106 in 20 overs in a Group A match at the Shaikh Zayed Cricket Stadium here on Monday.In response, Ireland lost Kev’n O’Brien (9 off 10) and Andy Balbirnie (8 of 6) in the powerplay, but a destructive partnership between veteran opener Paul Stirling (30 not out) and young all-rounder Gareth Delany (44 off 29 balls) took Ireland to 107/3 in 15.1 overs to start their campaign in style.Campher, who also hit the winning single, claimed the wickets of Colin Ackermann (11), Ryan ten Doeschate (0), Scott Edwards (0), and Roelof van der Merwe off consecutive balls in his second and innings’ 10th over, joining the elite club that includes Sri Lanka’s Lasith Malinga, who achieved this feat twice — once against South Africa in 2007 ODI World Cup and then against New Zealand in T20I in 2019, and Rashid Khan of Afghanistan, who claimed four in four balls against Ireland in a T20I in 2019. Campher thus became the third bowler to achieve this feat.There was no indication that things will go so wrong when the Netherlands had won the toss and chose to bat first.

A solid partnership between Max O’Dowd and Colin Ackermann seemed to be leading the Netherlands to a workable total after they had Ben Cooper run out in the first over. But Campher had other ideas, taking a remarkable four wickets in four balls to rip through the Dutch middle-order.The 22-year-old right-armer picked up Ackermann, ten Doeschate, Edwards, and van der Merwe in four consecutive balls in his second over and the tenth of the innings to put Ireland firmly in control and leave the Dutch 52/6. Akermann was caught behind by keeper Neil Rock, ten Doeschate and Edwards were trapped lbw while van der Merwe bowled as Campher made a huge impact.Campher this became the first bowler to claim four off four so in a T20 World Cup match. Only Rashid Khan and Lasith Malinga have managed the feat in T20Is, both in 2019.That the Netherlands still managed to post 1’6 after Campher’s four-wicket over was largely down to the feats of opener O’Dowd and all-rounders Pieter Seelaar and Logan van Beek.Campher finished with figures of 4/26 from his four overs, with Mark Adair also impressing with the ball, claiming three wickets for nine runs, the most economical figures ever recorded by an Ire’and bowler in men’s T20 internationals. The former fell just after registering his half-century, dismissed by the exceptional Mark Adair for an impressive 51 of 47 balls.But in the end, Stirling and Delany ensured Ireland did not face much trouble in overhauling the target.
Brief scores:
The Netherlands 106 all out in 20 overs (Max O’Dowd 51, Pieter Seelaar 21. Curtis Campher 4/26, Mark Adair 3/9) lost to Ireland 107/3 in 15.1 overs (Paul Stirling 30*, Gareth Delany 44. Fred Klaassen 1/18).