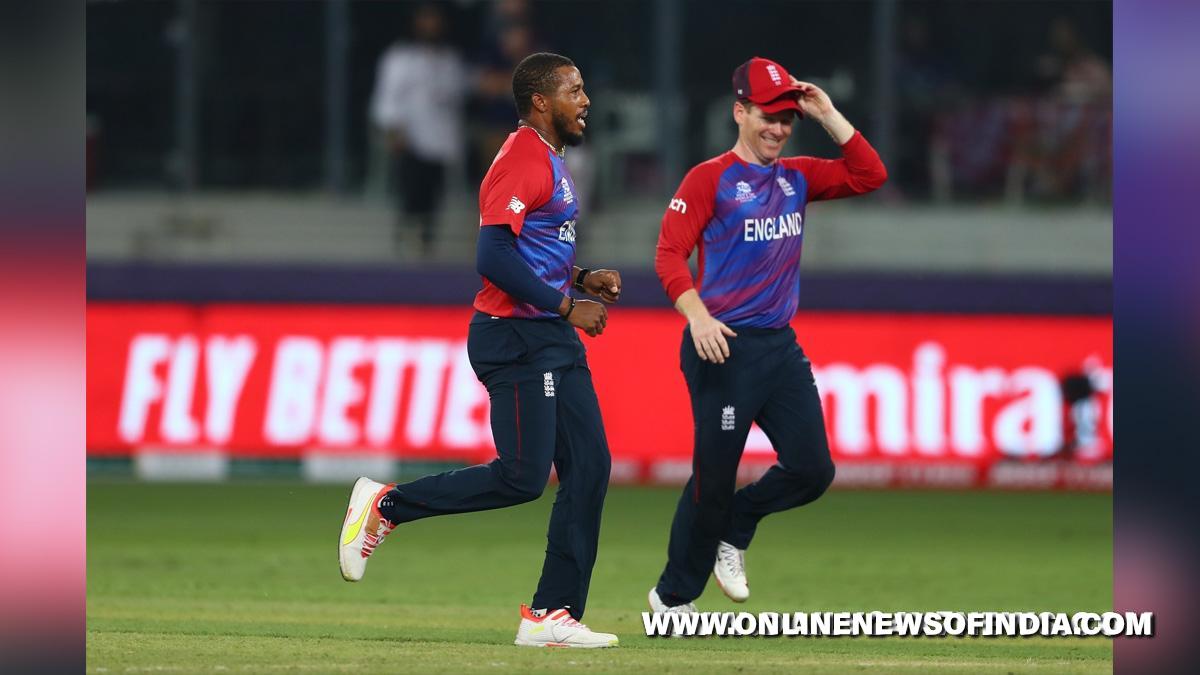 Dubai : A sensational bowling performance by Chris Jordan (3/17), Chris Woakes (2/23), and Tymal Mills (2/45) helped England bowl out Australia for 125 in a Super-12 match of the ICC Men’s T20 World Cup 2021 at Dubai International Cricket Stadium, here on Saturday.Apart from Jordan, Woakes, and Mills, Adil Rashid, Liam Livingstone also picked a wicket each for England while Aaron Finch (44 off 49) was the top-scorer for Australia.Put in to bat first, Australia were off to a terrible start as England pacers made good use of the slight covering of grass on the surface.Chris Woakes gave England the first breakthrough in the 2nd over of the innings as induced an outside edge from David Warner (1), who had just got back into form in the previous game against Sri Lanka. Chris Jordan then struck off his first ball as Woakes at mid-on took a sensational one-handed catch tumbling backward to dismiss Steve Smith (1).
The right-arm pacer Woakes continued his fine show, trapping the dangerous Glenn Maxwell leg before the wicket. Both Jordan and Woakes kept the lid on scoring as Australia finished the powerplay with just 21-3 on board. Rashid was brought back into the attack after the fielding restrictions were lifted and he made an instant impact, outfoxing Marcus Stonis (0) with the googly to trap him in front of the stumps.Matthew Wade (18) and Aaron Finch then checked the fall of the wickets and tried to revive the Australia innings, taking the team to 41/4 at the halfway stage. However, England spinners Adil Rashid and Liam Livingstone continued to stifle Aussie batters.Considering the slow scoring rate, one batsman had to switch gears and it was Matthew Wade, who gave away his wicket during the process. Australia’s innings never got the momentum and they kept losing wickets at regular intervals.Finch saw his fellow mates implode at the other end and even the skipper couldn’t accelerate. In the end cameos by Ashton Agar (20), Pat Cummins (12), and Mitchell Starc (13) helped the Aussies post a respectable total of 125-10 in 20 overs.
Brief scores:
Australia 125-10 in 20 overs (Aaron Finch 44; Chris Jordan 3/17, Chris Woakes 2/23) against England