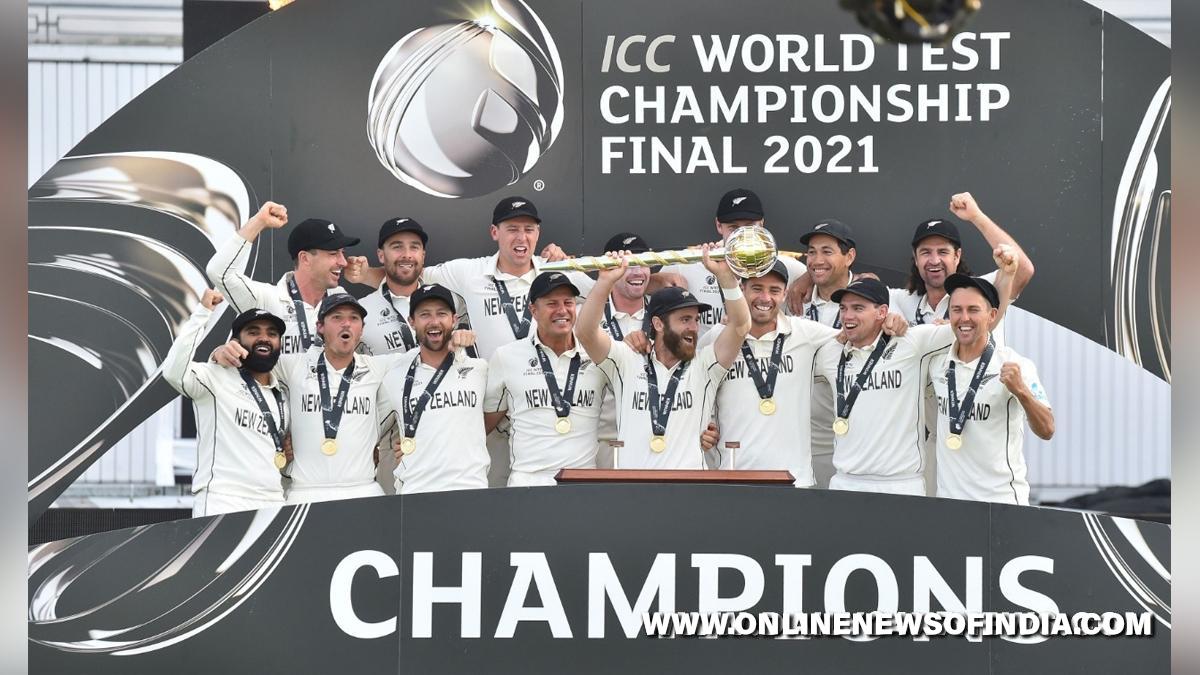 Abu Dhabi : Playing in three finals in three years would be a great achievement for any nation, and for a small country like New Zealand, it is a special feeling to reach their third final across different formats in as many years.New Zealand defeated England by five wickets to storm into the final of the ICC Men’s T20 World Cup at the Zayed Cricket Stadium here on Wednesday. Though it was their first T20 World Cup final, added to their recent success in the 50 overs game and Test cricket, it makes for a monumental achievement for this golden generation of the Black Caps players.New Zealand lost to England in the final of the 2019 World Cup (50 overs) on countback while the Kiwis defeated India in the ICC Test World Championships final in England last year.On Wednesday, a valiant knock from Daryl Mitchell (72 not out off 47 balls), along with an explosive cameo from James Neesham (27 off 11 balls) powered New Zealand to beat England by five wickets in the first semifinal of the T20 World Cup 2021. New Zealand will play the winner of the second semifinal between Pakistan and Australia, in the final in a couple of days.Mitchell said the New Zealand players were proud of their achievements in the last few years but will move on pretty quickly. He said they will give it everything they have got in the final, whoever between Australia and Pakistan is their opponent.”Look, we’re a bunch of Kiwis. There’s only 5 million of us, so we’re obviously very proud to be representing our country.

Yeah, obviously we’ve had some success in the last few years. But we’re going to enjoy the win tonight, make sure that obviously we celebrate that, but then we move on pretty quickly,” said Mitchell in the post-match press conference.”We know that we have a final on Sunday, and whoever we’re taking on should be good fun. We’ll give it everything we’ve got, but at the end of the day there are certain things you can’t control, so we’ll see what happens.”So, how significant is Wednesday’s victory for him? Mitchell said he would have laughed at the person if someone said he was said five, six years ago that he would be playing a World Cup final.”Yeah, it’s obviously a great honour to represent my country at a World Cup. Yeah, if you said this five, six years ago I would have laughed at you, so to be here sitting right now is awesome. Yeah, we’re just really enjoying being part of this tournament and having as much fun as we can.”It was a particularly significant achievement for the 30-year-old Mitchell, a late starter in cricket who made his international debut at 27.

“Yeah, I guess I actually consider myself very lucky to have played for New Zealand — I think I debuted at 27, so to be able to get seven, eight years of domestic cricket under my belt before representing New Zealand, I think I actually consider myself very lucky. That means I learned my game a little bit and go through the highs and lows of domestic cricket so that once you get on to the international stage you understand what works for you both as a cricketer and as a person. You can just go about doing your business.”But yeah, for me I’m just enjoying being able to represent my country, play for New Zealand and share a changing room with all my teammates. It’s pretty cool. Yeah, I’m having a blast and just trying to make the most of it.” he added.Mitchell said they will be watching the second semifinal with interest but will not have extra pressure and would rather enjoy playing in the final.”I know we”ll be watching it (second semifinal), and we’ll sort of start planning for both teams, but yeah, it will be cool whoever we play against. It’s a World Cup final, it’s going to be awesome, and I know we’re going to walk out with a smile on our face and enjoy it as much as we can,” said Mitchell.